Call me ignorant, but I was one of those people who thought that a musical or a play about a story originating in a foreign nation would be best performed by people who grew up in that country and understood the cultural nuances and language used by the author.

The Korean production of “The Brothers Karamazov,” a musical adapted from the final novel by Russian author Fyodor Dostoyevsky being staged at the Daehagno Jayu Theater in central Seoul, proved me otherwise.

The script and music was written afresh for the production by members of the Orchard Musical Company. Yet as the 100-minute musical revolved around a coffin placed at the center of the stage, I was led to ponder a host of questions in my head about the existence of God, human choice to believe or doubt and what can be defined as good or evil - all questions that Dostoyevsky asks in the 1,056-page book written more than a century ago.

The musical begins with the death of Fyodor Karamazov and ends with the revelation of who among his sons murdered him.

Although I had not read the novel before attending the musical, it was evident pretty quickly that this family had issues. The father, Fyodor, goes after the woman that his eldest son Dmitri loves, and clearly shows no remorse for doing so.

True to his character, Fyodor has several women in his life. Thus his sons are all from different mothers - except Ivan and Alyosha, though the two brothers are starkly different when it comes to their faith. 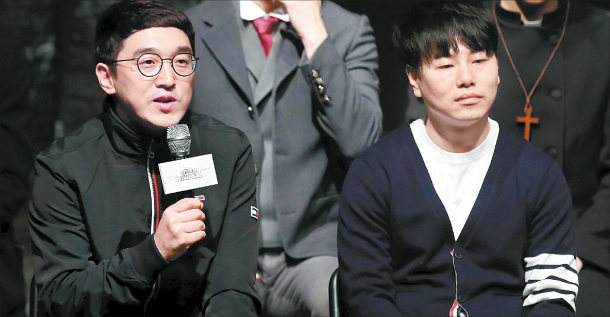 Director Oh Se-hyuk, left, answers questions from the press after a performance on Tuesday. Lee Jin-wook, the composer, is seated to Oh’s right. [YONHAP]

“It’s not God I don’t accept - I do not accept the world that he created, I cannot agree with it,” says Yoo Seung-hyun, who plays Ivan.

In turn, Alyosha sings of his faith, that there is still hope in this world as long as he can still love another human being.

Born last among the four brothers is Smerdyakov. Born out of wedlock, he has a disability and is often overcome with fits. He is more of a servant than a son to Fyodor, apparent in his subservient manner to his father and brothers, and especially toward Ivan, whom Smerdyakov seems to take a special liking to.

The musical stays true to Dostoyevsky’s narrative style in the novel and lets the audience into the deepest thoughts of each character. This is when the line between victims and perpetrators and right and wrong become blurred.

“The four brothers never quite leave the stage throughout different scenes, and we created the set to imply that each brother is stuck in their own world, in their own jails,” said Oh Se-hyuk, director of the musical, in a meeting with the press after a performance on Tuesday. “Ivan is stuck in his world of knowledge and logic, Alyosha in the world of faith, Dmitri in an actual jail, as he is suspected of his father’s murder.”

As the four brothers sing of how they have been wronged by their father, the audience is drawn to sympathy, in a way that plays or musicals can do more powerfully than movies, because there is an effect to sitting in the dark with only the actor’s face in spotlight. His or her agony, their grief for how they have been wronged, has a way of moving the audience, that is often more persuasive than had they been performed in a screen.

Even as it is revealed that Smerdyakov was the culprit behind the murder, he sings something that I could not but feel for: “If I have a fit, people eyes are not filled with sadness anymore. We need miracles in this world more than we need God. I brought that miracle into our midst by killing him. But oh why am I so sad? Where does this sadness come from?”

Had the performance been a play, it would still have been able to shed light on the thoughts of each character through monologues, but because it is a musical, it has the advantage of presenting the four brothers’ stark differences while emphasizing that they are still of one family, because they sing in harmony.

“Love builds a nest in my heart, thousand times over and over,” the four brothers sing in harmony in a hymn-like melody, which is used as a reprise throughout the musical.

Fyodor, who reappears throughout the musical as a reincarnated image within his son’s memories, sings the same line but with desperation in his voice.

“I do not believe in a God that I cannot touch,” Shim Jae-hyun, who plays Fyodor, sings, as his sons surround his coffin in a burial. “I believe in what I can touch physically. That is why I love. I love, I love, I love life.”

People say that the Korean sentiment of han, roughly translated into long-felt frustration, cannot quite be accurately represented in other languages due to the cultural connotation the word carries.

But as I watched Shin act Fyodor, I thought I saw a hint of han harbored by the man who feels wronged by God.

Perhaps that’s an advantage when it comes to watching a Korean performance of a foreign story. The story was Russian, but the actors intentionally or unintentionally incorporated Korean elements into the performance and it was moving to watch it happen spontaneously on stage.

In all, I saw the death of Fyodor as a moment of awakening for the four sons, as each comes out of the experience transformed. Even the good and faithful Alyosha comes to realization that he has “in vain proclaimed his love for mankind when [he] couldn’t even profess true love for one person in his life.”

It is in through watching these characters unravel before your very eyes that I thought the piece was quite powerful.

“The novel is such a masterpiece that it is impossible to pack all that is inside it into a two-hour act,” said Ahn Jae-young, who plays Ivan. “We have read the book hundreds of times to be able to deliver Dostoyevsky’s thoughts right into the conscience of the audience.”