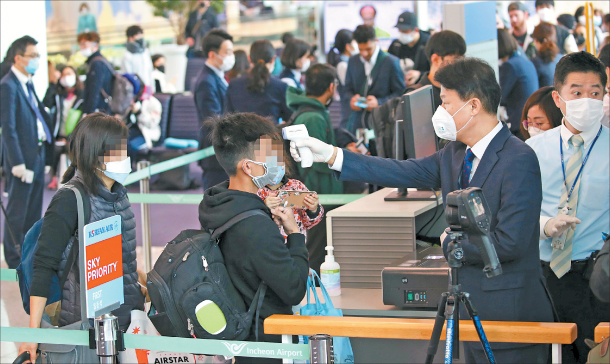 Over half of some 200,000 followers of the Shincheonji church in Korea outside Daegu were contacted by local government offices and asked about possible symptoms of the coronavirus as of Thursday midnight, the government announced Friday, and more than 1,600 said they were feeling ill.

They were told to self-quarantine in their homes to await virus tests, said Vice Health Minister Kim Gang-lip, adding that the examinations were ongoing. By Friday at 4 p.m., 571 more infections were counted by the Korea Centers for Disease Control and Prevention (KCDC) than the day before, mostly in Daegu, bringing total infections to 2,337.

The death toll was 16, with three more fatalities reported Friday, all from Daegu. A 69-year-old woman in Daegu died as she was waiting for her coronavirus test results in her home.

On Friday morning, she had trouble breathing and was taken to a hospital but died. Her results came out positive shortly after. Details of the other two deaths were not revealed as of press time.

Shincheonji, also known as the Shincheonji Church of Jesus, which other mainstream churches in Korea consider a cult, has been at the center of the coronavirus outbreak here since an adherent of its Daegu church tested positive on Feb. 18.

Who did, however, is still unknown. As infections linked to the Daegu church continue to balloon, the government has been trying to get hold of all Shincheonji adherents in the nation to find out directly what their health conditions are.

Over a couple of days this week, Shincheonji handed over a directory of some 245,000 followers living in Korea and abroad, plus some 65,000 people categorized as “trainees,” which the sect doesn’t consider official members of the church yet.

On Friday morning, health officials said they were going down a list of 194,781 Shincheonji worshippers in Korea outside Daegu, and that 114,068 (58.6 percent) had been contacted by Thursday midnight, of which 1,638 (1.4 percent) answered they felt they were coming down with symptoms of the virus.

The list of 194,781 Shincheonji worshippers in Korea did not include some 9,300 followers in Daegu because Daegu officials obtained that list earlier and have been going down the directory separately.

From Daegu’s 9,300 Shincheonji followers, about 1,300 are known to have reported symptoms, and they are undergoing tests or have completed them.

Any new positive test results for the Shincheonji worshippers will be added to the nation’s total infections toll over the weekend, Vice Health Minister Kim said Friday, likely leading to more steep hikes.

The list of 194,781 Shincheonji worshippers said to have been called Thursday did not include followers living abroad or the trainees. For those currently in a foreign country, the government said it would cooperate with the Ministry of Justice to check whether they’ve visited Korea recently.

With the trainees, after multiple refusals, health officials said the church finally caved in Thursday afternoon and handed over a list. Calls to the trainees are currently being made, the Health Ministry said Friday.

The Seoul Metropolitan Government Office announced Friday morning that 217 Shincheonji followers in the capital out of 26,765 replied they were feeling symptoms of the virus, while 1,485 worshippers could not be contacted.

Seoul had received a list of 28,317 believers in the city Wednesday night, and spent Thursday making calls, the city said in a statement, adding that some 1,552 would be called soon.

Seoul said all 217 people were told to stay home for self-quarantine and were undergoing tests, or strongly advised to visit a nearby testing center.

If those who could not be reached Thursday cannot be reached again Friday, Seoul said it would ask police for assistance in tracking them down.

Six more cases of infections were counted by the KCDC in Seoul Friday, bringing total infections in the capital to 62.

As the cat and mouse game between Shincheonji and the government continues, Daegu Mayor Kwon Young-jin announced Friday he would press criminal charges against the operators of Shincheonji’s Daegu church for “causing confusion” with the city’s measures to contain the outbreak by refusing several times to submit the list of about 1,760 trainees living in Daegu. Kwon continued that the church also failed to submit the list of Shincheonji followers in Daegu who attend a different Shincheonji church outside the city, which amounts to about 222 people.

In an exclusive report Friday morning, the JoongAng Ilbo hinted at possible links between Shincheonji and a group of Catholics from North Gyeongsang who recently tested positive for the coronavirus after returning from a pilgrimage to Israel, saying that the son of a member of the Catholic group is a Shincheonji follower.

The son and father both tested positive for the virus.

The Euiseong County Office in North Gyeongsang told the paper Thursday that the son initially denied he was a Shincheonji adherent, but admitted it after county officials found him on the nationwide list of members. The son, however, is said to be denying the accusation he transferred the disease to his father, which county officials said they would investigate further.

As infections across the nation continue to rise, so do the chances of undiagnosed patients wandering around their neighborhoods before getting tested, which has led shops, restaurants, cafes and department stores to shut down.

But as clinics and hospital emergency rooms also close, some are complaining about a lack of services for people with other medical complaints.

Hanmaeum Changwon Hospital in Changwon, South Gyeongsang, has been placed under cohort isolation since Wednesday after nurses there tested positive for the virus. Cohort isolation refers to the shutdown of an entire medical institution to prevent the spread of a contagious disease.

In Daegu, the emergency rooms of the city’s four largest hospitals were all closed at one point.

In Seoul, the National Police Hospital in Songpa District, southern Seoul, announced this week it would shut its emergency room until March 9 because its ER medical staff has been placed under a two-week house quarantine, the incubation period of the virus, after a nurse tested positive.

To prevent the spread of the virus, Yoido Full Gospel Church in Yeongdeungpo District, western Seoul - known as the largest church in the nation with nearly 560,000 adherents - announced Friday it would cancel its Sunday service this week and the next and substitute them with online services.

The Korean government announced that daily KCDC briefings on the coronavirus will now be provided with simultaneous English interpretation on KOREA.net and Arirang TV. The KCDC provides two briefings every day at 11 a.m. and 2 p.m.