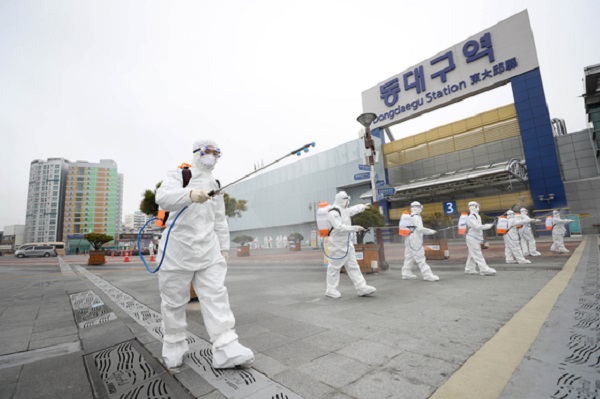 Quarantine officials carry out a disinfection operation in Daegu, 300 kilometers (186 miles) south of Seoul on Saturday to fight the spread of the new coronavirus in the city. [YONHAP]

Korea on Saturday warned that a large number of additional new coronavirus cases will be reported in Daegu, the epicenter of the virus outbreak here, as the country intensified its anti-virus fight with a massive program of testing followers of a religious sect in the city.

The country identified another sharpest daily spike of the new coronavirus, with 813 additional cases bringing total infections here to 3,150.

Korea confirmed its first new coronavirus case on Jan. 20 when a Chinese woman from Wuhan, the epicenter of the virus outbreak, tested positive for Covid-19.

So far, 17 virus patients have died from the virus that emerged in China late last year, including one virus-related death earlier in the day.

The latest victim of Covid-19 was a 77-year-old Korean man who tested positive for the virus on Tuesday. He suffered from diabetes and other underlying diseases.

The country also reported its first case of reinfection by the new coronavirus, with a 73-year-old woman testing positive for the novel coronavirus for a second time, even after being released from quarantine.

Of the 813 new cases, 657 are in Daegu, 300 kilometers southeast of Seoul, and 79 were reported in neighboring North Gyeongsang, according to the Korea Centers for Disease Control and Prevention (KCDC).

The accumulated number of patients in Daegu, the epicenter of virus outbreak here, surpassed 2,200. The city's neighboring North Gyeongsang has also reported 488 virus cases so far.

The cases in the city and the neighboring province account for 86 percent of the total infections in the country.

The sharp increase in confirmed virus cases in the country's fourth-largest city, which has a population of 2.5 million, came as authorities began intensive tests on followers of the Shincheonji church in Daegu.

The church members took up roughly half of the country's total virus cases as of Saturday morning, according to the KCDC.

Many more confirmed virus cases are expected in the coming days as health authorities have begun testing more than 210,000 Shincheonji followers.

Korea's health authorities have so far surveyed 88 percent of the followers of the church, with around 2 percent of them showing symptoms of the novel virus as of Saturday morning.

The KCDC said 171,000 had answered questions about their health so far, and it has collected samples from 3,381 church members who showed symptoms of Covid-19 infection.

The Daegu city government said earlier the number of virus patients there may soon exceed 3,000, considering that followers of the church infected with the virus make up roughly 66 percent of confirmed cases reported in the city so far.

At least 119 people also have been diagnosed with the virus at Daenam Hospital in Cheongdo County, just south of Daegu. Seven of the fatalities in the country are related to the hospital's psychiatric ward, where most patients have mental illnesses.

"The proportion of confirmed cases among Shincheonji followers is very high, and over the next few days, the number of new cases in Daegu will run high till virus tests on the church followers are completed," Vice Health Minister Kim Gang-lip said in a daily briefing.

Virus tests on a third of the 9,300 Shincheonjin followers in Daegu has been completed, he said.

"This weekend will be crucial juncture in containing further spread of the new coronavirus," Kim said. "Citizens are urged to stay indoors and avoid mass gatherings such as religious services."

To ward off further infections in the city, Daegu's education office ordered its 800 schools to delay the start of the new semester by two additional weeks to March 23. The city had already delayed classes by a week amid growing concerns over the spread of the virus.

There was another confirmed case from U.S. Forces Korea. The spouse of an American soldier who recently tested positive for Covid-19 has been confirmed to have contracted the virus, bringing the total number of USFK-related infection cases to four.

The woman has been in self-quarantine since Wednesday, when her husband, based at Camp Carroll in the county of Chilgok, North Gyeongsang, tested positive.

Other major provinces and cities have also reported new virus infections, the latest sign that the potentially deadly virus is spreading rapidly across the country.

Since raising the virus alert level to "red," the highest level, on Sunday, health authorities have focused on halting the spread of the virus in Daegu and North Gyeongsang.

As of Saturday morning, Korea is carrying out tests on 35,182 people nationwide, while 55,723 people have tested negative in total.

The number of patients cured of the disease increased by one to 28.