The dawn of a new millennium in Korea: Remembering the year 2000 in Seoul, when CD players were hot and cell phones were brand new

The dawn of a new millennium in Korea: Remembering the year 2000 in Seoul, when CD players were hot and cell phones were brand new 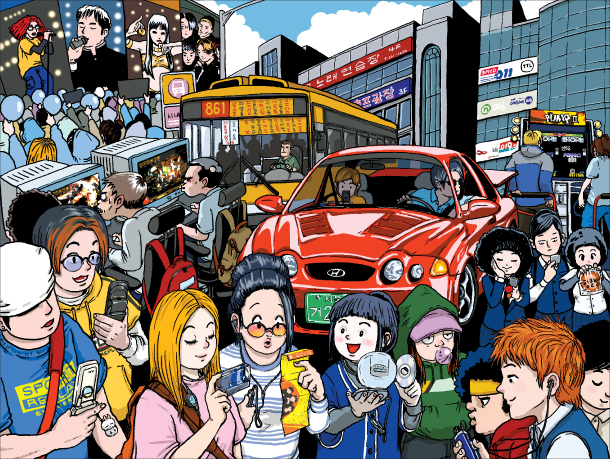 The illustration shows the year 2000 in Korea. Young Koreans loved to listen to music using CD players while MP3 players were for early adopters. Teenage boys especially enjoyed hanging out in PC rooms and playing Starcraft, while girls were crazy for idol stars like g.o.d and Jo Sung-mo. One of the most popular games played at the arcade was DDR, or Dance Dance Revolution, known as Pump in Korea. [SHIN MOON-SUB]

TURNING 20 FIRST IN A SERIES

We’ve all had our coming-of-age moments growing up, unless you’ve managed to travel through time (in which case we’d love to interview you).

The Korea JoongAng Daily is turning 20 this year. We’ve had our own coming-of-age moments, but rather than boring you with stories about us, we decided to bring you stories of people, animals and organizations “Turning 20.”
Here’s to 20 years and 20 more to come.

Top: SK Telecom launches the country’s very first Internet Zone in Yeoksam-dong, southern Seoul, in 2000. Center: In mid-2000, people could use the internet on their cell phones as well as laptops by connecting their phone to it. Above: In 2000, an outdoor cafe and bar was in vogue, and many retailers opened up their terraces to attract young Koreans. [JOONGANG ILBO]

In 1999, an apocalyptic mood captivated the world as people feared that the so-called Y2K bug — a computer error that many believed would break the world’s electronic systems — would result in a worldwide disaster. Even mainstream media dealt with the problem, speculating that the two byte representation in computer systems would malfunction when the century turned over from “99” to “00,” thereby creating all sorts of catastrophes ranging from financial systems crashing to power failures that could even make airplanes fall out of the sky. Media coverage fueled the anxieties of people across the globe, causing some to start panic buying and stocking up on candles, canned foods, batteries and drinkable water at home.

Nearly everyone across the world anxiously waited for the new millennium to begin, but the year 2000 arrived rather peacefully and everyone’s clocks and computers continued to operate without much of a glitch.

Twenty years have passed since then, and that frenzy seems like an episode of a comedy sitcom, especially for young teens of today who grew up familiar with not only computers but also programming.

Looking back, it seems like the world has been developing at a faster pace than ever for the past 20 years.

In an era where music can be streamed live and emails can be sent while riding the subway, let alone artificial intelligence assistants that can do things for you, it’s difficult to imagine what the country was like 20 years ago.

What was the latest technology that made Koreans’ jaws drop? How did Koreans listen to music? What was in vogue? Who was the most famous celebrity?

To start off the “Turning 20” series, the Korea JoongAng Daily attempts to draw a scene for readers of what Korea looked like 20 years ago.

How did we consume music?

Similar to today, many young Koreans walked around the streets with earphones in their ears, although one difference would be that none of the earphones back then were wireless.

What’s connected to the end of their earphones, however, was entirely different. Back then, portable CD players were a must-have for young Koreans. Digital audio player manufacturing companies like iriver were eager to come up with lighter, thinner designs to make them easy to carry.

“I was 17 in 2000, and as I remember, almost all my friends had a CD player,” said Lee Sang-bin from Seoul. “It was common for us to carry a case that keeps all of our CDs and lend them to each other. The funniest part about using a CD player is that it made us walk very slow because it skipped a lot when you ran or moved around too much.”

Physical CD sales were the main standard for calculating artists’ album sales and calculating the music chart rankings, whereas today, so many other variables make rankings more difficult to determine and prone to illegal manipulation. This is why music industry insiders say that using the music charts as a yardstick of artists’ popularity was more authentic 20 years ago.

Towards the latter half of the year, with the development of the internet, illegal downloading of music became prevalent through P2P, or peer-to-peer, service sites like Soribada. As downloading became possible, many began to ditch their CD players for a brand new MP3 player.

Music industry experts insist that 2000 was the last golden age for the record industry. Popular artists like ballad singer Jo Sung-mo, rock star Seo Taiji and JYP’s boy band g.o.d sold at least one million copies of their albums. Jo, especially, enjoyed his heyday as not only his third album, but also a remake album of his previous songs surpassed one million in sales, making him the top-selling artist of 2000.

When the new millennium arrived, many Korean houses were still using a dial-up modem to connect to the internet. Then the asymmetric digital subscriber line (ADSL) system that used a digital cable line to connect to the internet was the next big thing. One after another, many homes began switching to this internet system, putting an end to the endless fights between parents and children over the use of the landline.

“I remember asking my mother to change our internet service,” recalled Park Ju-won, 39 from Seoul. “We were still using the dial-up modem, and many of my friends were switching to ADSL. It was such an innovation for me that I could use the internet without making our home landline busy. It meant I was free from my mom’s interruptions whenever I was using the internet.”

The latter half of 2000 signaled the beginning of the “digital era.” Most people owned their own cell phones by 2000, and the government even released public advertisements showing a rural village farmer using a cell phone. News articles were also published saying how “people can now connect their laptop with a cell phone to use the internet outside.” Photographs of such articles showed people using their laptop at a beach during a summer holiday and showing how amazed they were to use the internet on their cell phones and their laptops as well.

“I remember it was slow, but it was amazing,” said Ko Min-sang, a 40-year-old businessman in Seoul. “I could send emails using my cell phone and that meant I could work outside the office.”

A February 2000 news article states that SK Telecom established the country’s first Internet Plaza in southern Seoul, where “people can come in, connect to the internet, send emails and even play games.”

“I also remember new cell phones being launched so often that there were so many options to choose from,” said Ko. “The cell phone I had in 2000 was Samsung’s Anycall Dual Folder, which had a small screen on the front allowing users to see who’s calling without having to open the folder. It was great.”

How did we dress?

Perhaps influenced by the new millennium, fashion in 2000 was all about technology. There was this monochromatic approach to fashion, and many outfits came with shiny black materials, big buckles and an abundant use of metallic. But many insist that the “futuristic look” was only for going out at night.

The most common fashion items in Korea at the time, according to fashion insiders, were tracksuits, Rockport boots, dress shirts and leather coats for men and box-pleated skirts, leather skirts, T-shirts with rhinestones and halter tops for women.

But specifically for Korea, there was one fashion item that was a must-have for young students of Korea — brown and beige duffle coats, which were also referred to as the “tteokbokki coat” due to the shape of its long buttons that resemble the spicy Korean snack.

“It was like a school uniform,” said Heo Min-kyung, a 36-year-old from Seoul. “Everyone in my high school had one of those, both boys and girls. I guess it didn’t really matter which brand they wore, but the hippest one was the one by Polo. If you wore a tteokbokki coat from Polo, you were at the top of the hierarchy in class.”