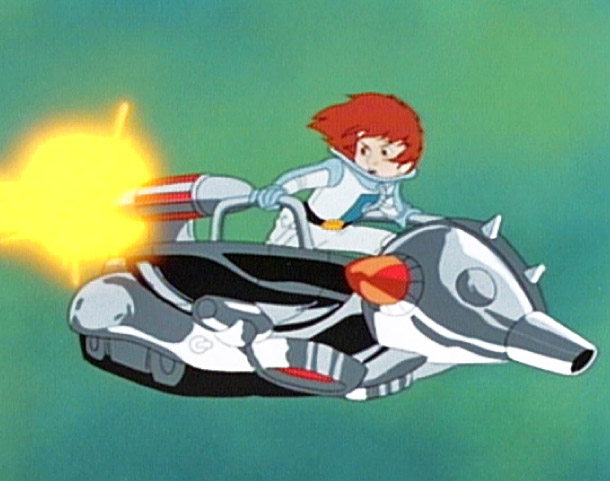 Ican, the main character in the Korean cartoon “2020 Space Wonder Kiddy” rides Kobot, his robot companion who could transform into a motorcycle or a spacecraft. [KBS]

Even a few weeks into the new decade, the ring of our current year, 2020, is a bit unfamiliar.

Thirty years ago, 2020 sounded like the ultimate destination in the future - or so thought the creators of a popular Korean animated series called “2020 Space Wonder Kiddy.”

Aired in 1989 by KBS, the state broadcaster, the series was set in 2020, and a very different world it was - a very challenged world. Affected by the population explosion, diminishing natural resources and environmental problems, humans had started hunting for habitable planets outside our solar system.

An astronaut on a mission to find another inhabited planet goes missing. A rescue mission is sent, and the astronaut’s son Ican manages to smuggle himself on board. Over 13 episodes, Ican becomes the Space Wonder Kiddy of the title, which is a kind of “Konglish” way of saying Space Pilgrim - and a precursor to the Brad Pitt character in “Ad Astra.”

Ican is a Star Child as conceived by Koreans not long after they had just revolutionized their own home base by giving birth to a democracy after 26 years of dictatorship and showing off their achievement to the world through the 1988 Seoul Olympics.

Ican’s universe was fanciful, but some details actually foresaw the future. Kobot, his robot companion, looks like Tik-Tok from L. Frank Baum’s Wizard of Oz books, but acts like Siri or Alexa, assisting him with varied tasks.

Ican and the search team stumble upon a more sinister robot in the shape of a dinosaur that runs on a chip with artificial intelligence (AI) capabilities - a class of semiconductor that would only come into existence in 2017.

Wonder Kiddy’s hopes for 2020 were a little giddy. Kobot transformed into a flying motorcycle when convenient, and even a spacecraft. 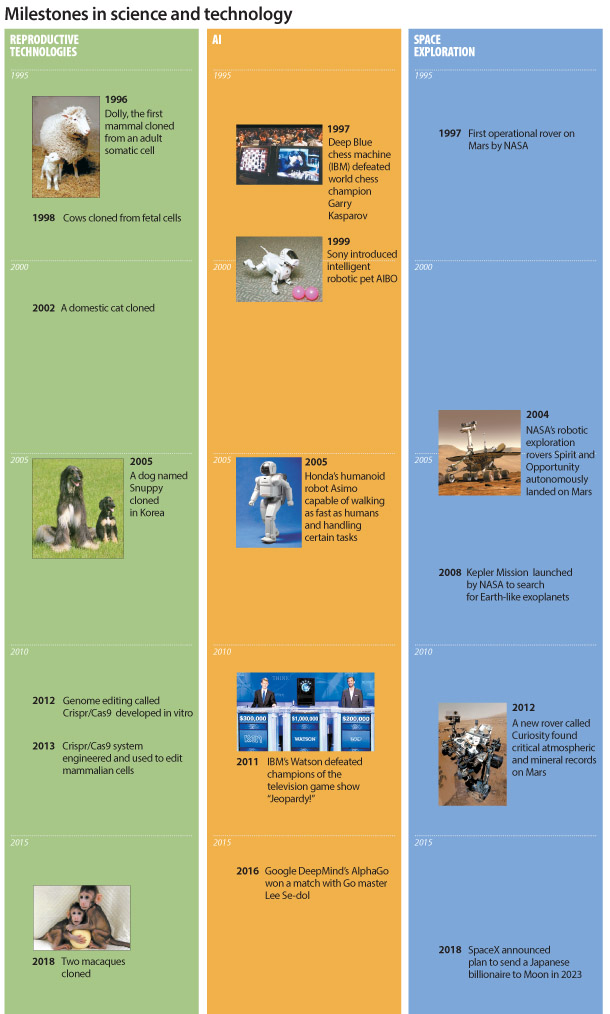 “2020 Space Wonder Kiddy” was but one view of the future from 1980s Korea. To mark the start of a new decade, the Korea JoongAng Daily looks back at past predictions about important yet controversial technologies such as human cloning and AI to see if we’ve hit the marks set by futurists, academics and other dreamers, fallen short - or exceeded expectations from our past.

Cyborgs and creatures with altered genes from humans are staples in science fiction, although more often than not they are regretted by the humans who made them.

The 1996 creation of Dolly the sheep, the first mammal cloned from an adult somatic cell, boosted hopes and fears that identical copies of humans would soon be possible.

A 2000 poll in Popular Science, a U.S. science magazine, showed that 63 percent of respondents believed that scientists would be able to clone humans by 2025. Thirty percent of scientific experts polled in 2017 by Futurism, a U.S. magazine on science and technology, said that researchers would clone the first human by the 2020s.

Now that we’ve reached 2020, it seems those predictions were off. Beyond the scientific challenges, the ethical and safety considerations have slowed cloning research, as has the rise of alternative technique to alter genes called Crispr-Cas9.

Following the birth of Dolly - and her death a mere six years later - other mammals have been cloned including dogs, cats and pigs. In 2018, Chinese scientists succeeded in producing a pair of identical macaques. The baby monkeys were the first primates to be cloned.

Those experiments also revealed the risks associated with cloning or somatic cell nuclear transfer. A large portion of cloned embryos failed to survive. Many clones died right after birth, and others way before their natural life expectancy.

In cloning, a cell is copied by transferring its nucleus into a donated egg cell whose own nucleus has been removed.

“It would be profoundly risky at this point, as the Chinese cloned monkey experiment shows,” said Hank Greely, a law professor at Stanford University who researches legal and ethical implications of controversial bioscience, about the idea of cloning humans.

The low success rate deterred some scientists from venturing into artificial human cloning, along with strict regulations in countries. Korea’s own scandal around Hwang Woo-seok, who cloned the first dog but also falsified research in stem cell work, didn’t do much for the reputation of scientists in the field.

Named “Breakthrough of the Year” by Science magazine in 2015, the technology allows doctors to cut, replace and alter genes with unprecedented ease and accuracy using an enzyme called Cas9 and a guide RNA that helps the enzyme target the right site.

Genome editing is considered less risky, more flexible and cheaper than the cloning technology used to create Dolly and has the potential to significantly reduce the likelihood of disease recurrence compared to drug treatment.

In 2013, researchers at the University of California, Berkeley and a Korean team led by Prof. Kim Jin-soo at Seoul National University were among the first to prove that Crispr can be used in human cells.

Still, the idea of applying it to human embryos remains fraught in the aftermath of a controversy involving Chinese scientist He Jiankui.

He announced in 2018 that he succeeded in producing genetically-edited babies using the Crispr-Cas9, but Chinese authorities said He’s experiment lacked transparency and didn’t follow proper guidelines.

Academics expressed concern over the way the experiment was conducted, and after a call to halt all work on genome editing, the World Health Organization launched a global registry in 2019 to track research on human genome editing. Shoukhrat Mitalipov, an American scientist specializing in cloning and Crispr, estimates the latest gene editing technology won’t be ready for clinical trials for another five to 10 years.

The evolution of humanity has been driven by advancements in tools and technology.

The ultimate tool, AI, is too far for some. Scientists believe that AI can not only help with tasks but equal or surpass the human brain with sophisticated levels of reasoning - and possibly even consciousness.

At the dawn of this millennium, some predicted that by 2020 we could see a robust form of AI, though AI capable of performing a full range of human cognitive abilities has not yet been invented.

British futurist Ian Pearson forecast in 2005 that computers could gain consciousness by 2025 - and perhaps as early as 2020.

Well-known futurist and computer scientist Ray Kurzweil predicted in his 2005 book “The Singularity Is Near” that personal computers would be powerful enough to simulate the human brain by around 2020.

The main obstacle for simulating a human brain, however, is that how neurons and synapses in the brain work to generate thought and behavior remains a mystery, along with how information is processed in the brain.

Even if researches tackle those questions, emulating one hundred billion neurons and one thousand trillion synapses working together would require a level of processing power in computers that is not currently available.

“If there is a delay, it will most likely be because technical progress turns out to be harder than expected - current approaches hitting diminishing returns and us having to wait for fundamental new insights before we can reach the next level,” he said.

“At some point we will begin to hit the limits of hardware, and it is possible that progress will then slow down.”

Still, Bostrom emphasized that the progress made in recent years took place at a faster pace than previously.

“I’d say it’s a bit ahead,” he said. “In the first decade of the century, progress seemed quite slow, but in the last eight years, since the beginning of the deep learning revolution, progress has been much faster than expected, more than making up for the slow start.”

One notable milestone was computer program AlphaGo’s 2016 trouncing of humans in the board game baduk, also known as Go. The time-honored game is considered more complex than chess, a game conquered by IBM’s Deep Blue computer in 1997.

The advancements in AI are in line with Kurzweil’s Law of Accelerating Returns. It surmises that the rate of change in a wide variety of evolutionary systems including technology tends to be exponential. Kurzweil proposes a hypothetical future point called Singularity. Once the Singularity has been reached, Kurzweil says, machine intelligence will far surpasses all human intelligence.

With the pace of development we have already seen, the Swedish philosopher believes that AI with consciousness is within reach, and soon.

“Possibly in the relatively near future,” Bostrom said, “considering that most of us would think that some animals have minds that are to varying degrees conscious and that current AI capabilities are in some respects beginning to be comparable to those of animals,” he said.

Still, ethical quandaries will have to be resolved by human minds, presumably before the Singularity.

“One of the things I’m currently thinking about is how to approach the ethical issues that these developments will raise - digital minds with moral status,” said Bostrom.

The earliest known astronomical catalogue dates from about 1200 B.C. The Babylonians tracked the key stars - evidence of humankind’s ingrained desire to explore the realm of deep space.

From the development of the astronomical telescope in the 1600s came the first human orbiting the earth in 1961 and the historic Moon landing in 1969.

At the turn of this century, major news outlets including the JoongAng Ilbo envisioned a 2020 in which a married couple would go on a honeymoon to Mars. But the human race’s conquest of space has proven a lot slower than anticipated.

Rovers have been sent to the so-called red planet, but no humans. And only around 40 percent of Mars missions - the launch of probes and rovers - were successes.

The general public has not yet been invited to space, although NASA and private companies are racing to fulfill that mission.

One visionary for space exploration is Elon Musk, CEO of Tesla and private aerospace manufacturer SpaceX.

The entrepreneur has a grand plan to make humans a multi-planet species by building a city of 1 million people on Mars by 2050.

To achieve that goal, he envisions a so-called Starship, which Musk has said will be capable of carrying up to 100 people.

The key is lowering costs. Starship’s design is intended to maximize re-use - to allow it to be used for multiple journeys.

To mass-produce Starships, Musk is creating a shipyard in South Texas.

He wants the first manned flight to Mars to be made by 2024. NASA is targeting the same timeline for its first manned mission to the red planet.

Before Mars, SpaceX will send its first private customer - Japanese entrepreneur Yusaku Maezawa - on a trip around the Moon in 2023 aboard the Starship.

That great adventure comes at a price, both monetary and existential.

“The first journey to Mars is going to be really very dangerous,” Musk said in 2016. “The risk of fatality will be high. There’s just no way around it.”