[DEBRIEFING] Financing of a masterpiece: Who paid for ‘Parasite’?

[DEBRIEFING] Financing of a masterpiece: Who paid for ‘Parasite’? 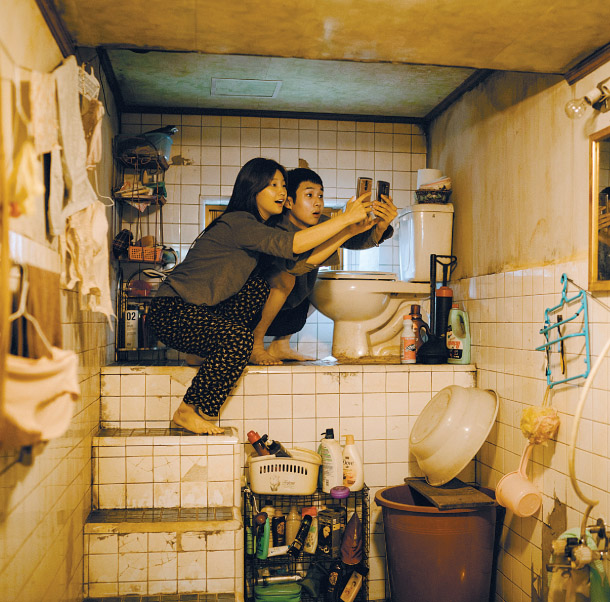 In Debriefings, the Korea JoongAng Daily discusses a topical issue in-depth in a Q&A format. In this Debriefing, we look at the structure, development and history of the Korean film industry and look at some of the relevant initiatives in the works.

For international audiences, “Parasite” seemed to come out of nowhere.

One day, they are thinking that the Korean Wave has something to do with melodramas, highly-choreographed boy band acts and mukbang. Then suddenly they are getting their minds blown by a completely unexpected 132-minute cinematic bombshell, straight out of Korea.

It should not have been a bolt from the blue. The film was decades in the making. It is a product of a long history and a generation of relatively young directors who slowly, frame by frame, lifted the business and brought it to international levels and, apparently, beyond.

Equally important, and less well-known, is the money behind the masterpiece. How “Parasite” got financed is a story in its own right and, like the film itself, is a complex and ambiguous tale, with a twist.

There’s a clear element of indie to it all. The plot begins with a 15-page treatment in a manila envelope handed across a table by a leftie director - like a manifesto - a 13.5 billion won ($11.2 million) budget and a smallish production company that specializes in gaming-related endeavors. Then it gets complicated, and decidedly corporate, involving one of the country’s largest chaebol, massive multiplex chains, hedge funds, private equity and some Hollywood support.

Like director Bong Joon-ho, the story is refreshingly disarming, with a notable lack of product placements, beyond some free beer and noodles and a gentlemen’s agreement on the use of a brand name.

Whether this combination of players and sequence of events is key to making great Korean films is yet to be determined. It could be the secret of success, or not. But it is always worth following the money to see where it takes us. 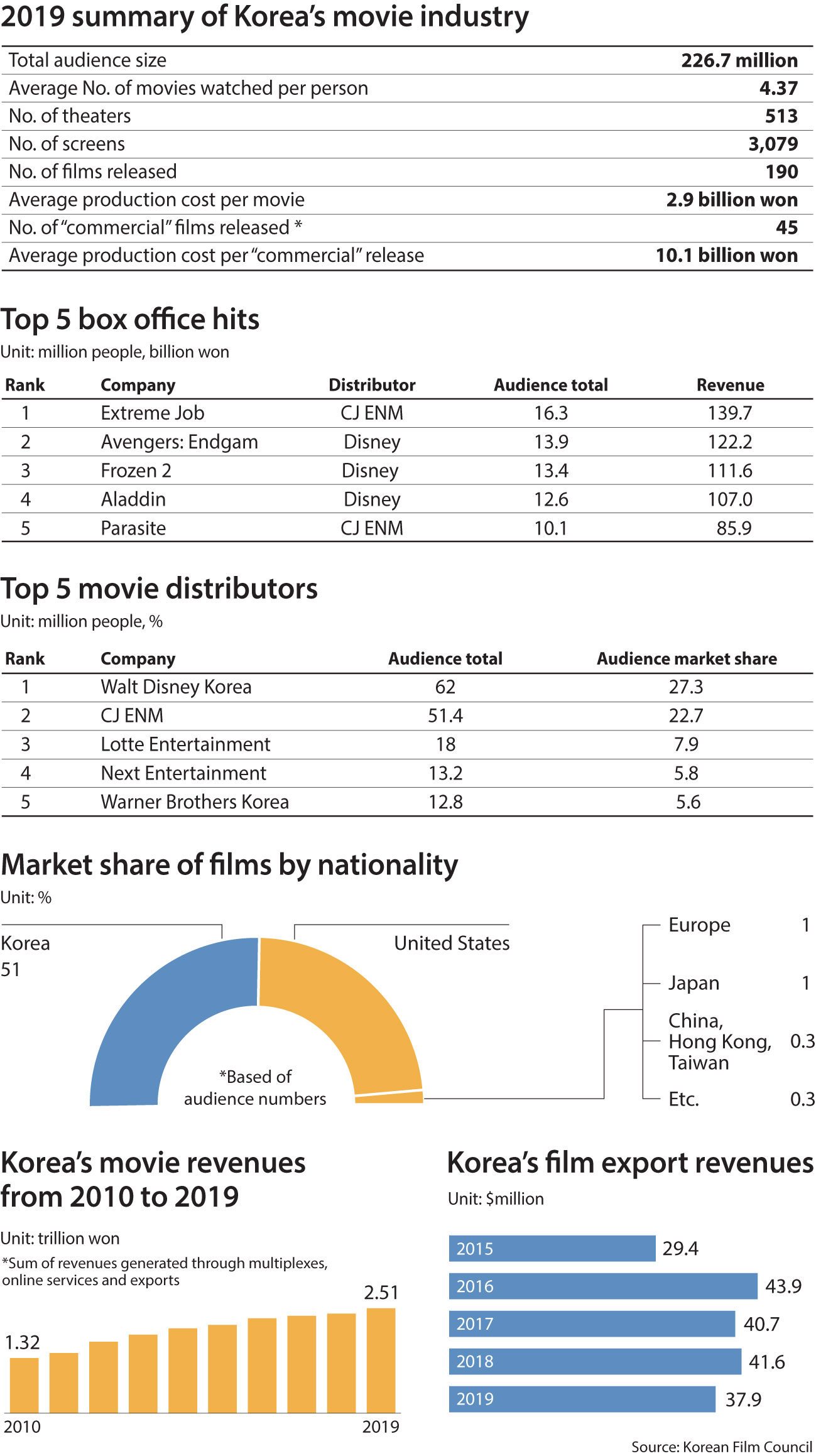 Hedge funds were also in on the funding, including: Ryukyung PSG Asset Management, a Yeouido-based company in western Seoul founded in 1997 with 1.7 trillion won under management; Q Capital Partners, a Gangnam-based company in southern Seoul founded in 1982 as Korea Development Investment Finance Company, Korea’s first venture capital firm; and Company K Partners, which was founded in 2006 and is also based in Gangnam.

The film did well at the box office, grossing $209 million worldwide as of Sunday since its release in Korea on May 30, 2019. It generated $71.7 million in Korea alone and $49.5 million in the United States, making it the fifth highest grossing non-English-language movie in U.S. film history. “Parasite” grossed $14.3 million in France, $10.9 million in Britain and $7.2 million in Mexico.

2. Barunson E&A? What is it exactly? What is CJ ENM? When did CJ ENM get involved?

Behind every movie is a production house, a distributor and investors. As its name suggests, a production house actually makes the movie. This starts from selecting an idea, scripting it, budgeting, attracting investors, hiring the cast, shooting the film, editing and additional recording.

Barunson E&A was the production house of “Parasite.” Kwak Sin-ae has been Barunson E&A’s CEO since 2013. In 2015, she received Bong’s “Parasite” script, as a 15-page treatment in a manila envelope. Three years later, the film was done.

A distributor is in charge of selling the film to theaters and promoting it to the public. This includes deciding on the right release date according to the movie’s genre or target audience, as well as marketing activities and exports.

Korea has four major distributors - CJ ENM, Lotte Entertainment, Next Entertainment World and Showbox. Movies distributed by these four attracted 41.5 percent of the domestic movie market audience numbers last year. CJ ENM was the distributor of “Parasite.” It is the oldest and largest of the four, controlling 22.7 percent of Korea’s film market in 2019.

Bong was no stranger to CJ ENM. The company had distributed his “Memories of Murder,” (2003) “Mother” (2009) and “Snowpiercer” (2013). According to CJ ENM, the decision to distribute “Parasite” was made in the pre-production stage, in other words, before May 2018 when “action” was first called. CJ was not just a distributor after the fact. It got in on the ground floor, apparently recognizing the potential of the idea.

In general in Korea, the production companies take 60 percent of the profits, while the outside investors walk away with the rest.

3. What about product placements? The beer and the noodles are almost characters in the film. Did the companies pay for the marketing? Is that part of the financing equation?

Actually, and surprising, no.

In the film, the Kim family drinks Filite beer in one memorable scene where they celebrate getting paid. The beer is made by Hite Jinro, but according to the alcoholic beverage company, no deal was made. It sent over some of its products to the crew, including Chamisul soju and Filite, but was not looking for publicity.

Interestingly, the company is not riding the “Parasite” wave. It doesn’t do much marketing internationally and doesn’t think the budget beer shown in the film would appeal to foreign drinkers. It is also unlikely that the company wants to be known as making the beer of the working poor.

The story is similar for Nongshim. Two of its noodle brands were featured in the film: Chapagetti and Neoguri. They were combined into the popular chapaguri (better known to global viewers as ram-don) in one scene. Nongshim gave the filmmaker permission to use its brand names in the film, but no money changed hands. The company just sent some of the products over to the set.

Chungmuro is the name of a district in central Seoul that once bustled with theaters and production houses. It was where aspiring actors, directors and screenwriters flocked to in hopes of pursuing movie careers. Chungmuro’s days as the center of the movie industry are long gone, the golden years over by the late 1990s.

Some of Korea’s big-name directors, like Bong, Park Chan-wook and Kim Ji-woon, are considered the last generation of Chungmuro’s “cine kids,” who started their early careers in the neighborhood.

Today, many large movie-related companies are located on the opposite side of the river in Gangnam. The relocation started in the late 1990s as major conglomerates and investment groups expanded into film.

Chungmuro is still considered the symbolic center of Korean cinema and is often used as shorthand for the film industry in Korea, like Hollywood in the United States. If someone is called a “Chungmuro” director or actor, it is a compliment and suggests high quality and a healthy disdain for the commercial side of the business.

5. Can you give me a brief overview of Korea’s movie industry?

In 2018, Korea’s movie industry ranked No. 5 globally, with $1.6 billion of gross revenue, according to the Motion Picture Association of America. As Korea is the 12th-largest economy in the world, its movie business is outperforming the overall economy.

The country punches above its weight as a market. It can’t be ignored and is among the first few markets where blockbuster movies debut. A-list actors often stop by for promotional events.

Exports are another story altogether. Numbers have been in decline over the past two years as tensions with China increased. Beijing sought to stop the import of Korean products, and this included films. The protests in Hong Kong also pulled down Korea’s movie exports. In 2018, Hong Kong and China respectively ranked as the No. 2 and No. 4 largest importers. In the same year, Korea’s overall movie exports plummeted 32.3 on year, followed by another 8.2 percent fall last year. The count includes films and movie-making technologies and services.

6. How are Korean movies doing in Korea?

The share of Korean to non-Korean movies played in domestic multiplexes is evenly split. According to the Korean Film Council (Kofic), Korean movies accounted for 51 percent in 2019, making it the ninth consecutive year that Korean films beat imports. Films from the United States took 46.4 percent of the market last year.

The Walt Disney Company Korea had a 27.3 percent share in the country last year by audience, and CJ was at 22.7 percent. This was the first time in 16 years that a non-Korean distributor took first place. CJ had worn that crown for 15 years, except for 2018, when Lotte took the top spot.

7. What were the restrictions on foreign movies and when did that change?

In Korea, a screen quota was first legislated in the 1960s. It was designed to keep foreign movies out for a certain number of days. In 2006, movie directors and actors took to the streets to stop a reform that would reduce the screen time blocked out for Korean movies to 73 days from the original 146 days.

The reform was part of the free trade agreement signed between Korea and the United States. The Korean movie industry protested the change, concerned that the market would be flooded with U.S. blockbusters. But the change was made anyhow.

Despite concerns, over the past decade Korea’s movie industry has grown in terms of size and developed in terms of production quality boosted by investment by large conglomerates. This has led to a new push for quotas.

Kofic is concerned with the lack of balance in the business. Disney and CJ dominated the Korean market in 2019, while all other the others were in single digits. Of five movies that attracted more than 10 million people, three were Disney’s and two were CJ’s. The number of indie films released last year dropped 17.5 percent to 409, attracting only 3.6 percent of the film audiences.

Two movies that fueled the debate last year were “Avengers: Endgame” and “Frozen 2.” Released in late April, “Avengers” at one point took 80 percent of the market. One domestic civic group reported Walt Disney Korea to the Seoul prosecutors in December, as its screen dominance in Korea neared 90 percent at one point. They alleged Disney was violating domestic antitrust laws.

9. Are efforts being made to make the business more competitive?

In mid-February, a group of Korean movie makers and screenwriters started a campaign to gain support for the “Post-Bong Joon-ho law.” It would be designed to prevent chaebol from being involved in both distribution and the operation of cinema chains.

The group claims that a conflict of interest exists between the two key elements in the business and that these economic concentrations were hoarding resources and preventing the development of talent.

Establishing a quota for indie and art films is another suggestion.

As of Thursday, 1,325 movie industry workers signed in support, including actors and directors.

“This is a very different time from the 2000s when directors like Bong Joon-ho first appeared in the scene,” the group said in statement, referring to the so-called “renaissance of Korean cinema,” when capital first started flowing into the market and combined with government funding, which started in 1999. It was during this time that a score of Korea’s leading directors, like Park Chan-wook, Lee Chang-dong and Kim Ji-woon, rose to fame and started receiving recognition overseas.

What kept their innovative experiments going were production houses that offered support despite box-office failures. From the mid-2000s, these companies eventually started selling shares to cash-rich investors. From this point, it is argued, Korea’s movie industry started showing less tolerance for failure, which is why we no longer see the likes of the “Chungmuro kids” of the 2000s.