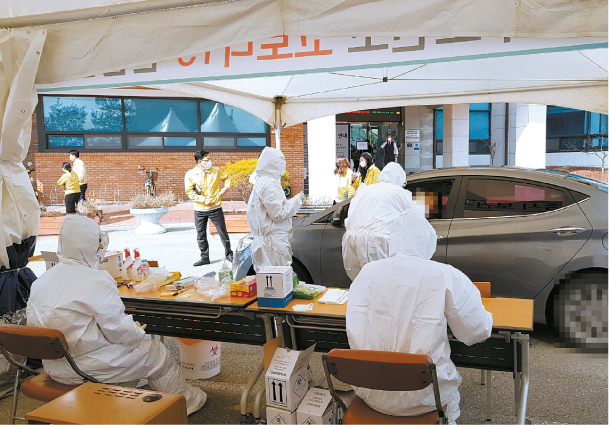 A driver passes by a drive-through test center at Sejong Health Center in Sejong to be tested for the new coronavirus on Feb. 27. [SEJONG HEALTH CENTER]

A car cruised through a large tent in the parking lot of Sejong Health Center Thursday, stopping as a medical technician approached. The window rolled down, and the staff member collected samples and checked the temperatures of the driver and a child in the back seat. Seven minutes after arriving, the driver sped off, having been told to stay home until the test results are released.

As the number of confirmed coronavirus cases continues to grow across the country, residents are pouring into clinics and testing centers to find out whether they have the potentially deadly disease, causing waits to reach up to six hours in some cases as medical staff are required to change protective gear and disinfect their equipment between patients.

In response, the health center in Jochiwon, Sejong, launched a drive-through testing center Wednesday, allowing medical staff to quickly test patients exhibiting possible coronavirus symptoms, including fevers or difficulty breathing. For those with their own vehicles, it allows them to avoid long lines with other potential patients - which itself increases the possibility of becoming infected.

Traditional testing centers can inspect two to three people an hour, with most of that time owing to sanitary protocols undertaken by staff members. The drive-through, on the other hand, can inspect six to seven people per hour.

In addition to the system’s efficiency, it offers a degree of anonymity for those worried about the stigma of being tested for the highly contagious virus.

“I was scared of getting exposed when I was notified that I had contact with a confirmed patient,” said a woman who came to the drive-through testing center. She declined to provide her name. “I booked the examination time in advance so that I wouldn’t have to wait for too long.”

At the end of the tests, medical staff spray the car windows with disinfectants, provide disinfecting wipes to the driver for cleaning the inside of the car and ask the car’s occupants to isolate themselves until they are contacted with the test results. They also recommend the vehicle not be used by other family members.

After taking note of the efficient system in Sejong, other municipalities, including Seoul and Daejeon, have begun looking into establishing their own drive-through centers. Goyang is also operating a drive-through testing center at a public parking lot in Deogyang District in Goyang, Gyeonggi.

“Drive-through testing centers are safe because there are fewer risks of exposure to the virus as the subject only needs to lower the car window,” said Kwon Geun-yong, head of Sejong Health Center. “To minimize the waiting time, we are taking reservations in advance.”