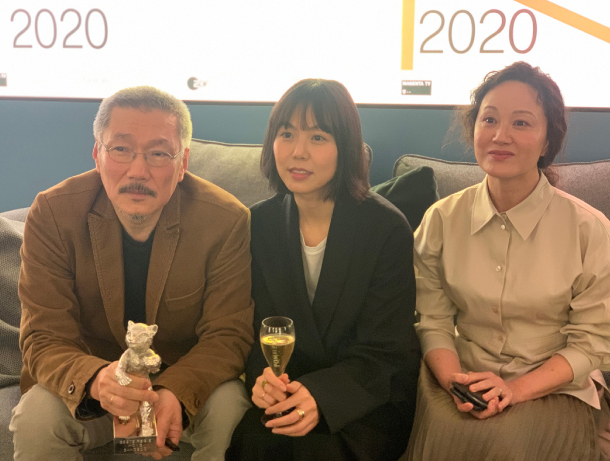 At the awards ceremony, held at Friedrichstadt-Palast in Berlin, the director’s 24th feature film was awarded the Silver Bear prize for Best Director.

The film festival kicked off Feb. 20 and closes Sunday.

Hong is the second Korean filmmaker to earn the prize in the category, following Kim Ki-duk for “Samaritan Girl” in 2004.

“I’d like to thank everyone who has worked with me for this film, the film festival and the jury,” Hong said in an acceptance speech.

He also introduced his actresses, including lead Kim Min-hee, who received a round of applause from the audience.

“The Woman Who Ran” is a story about a woman who meets three friends while her husband is on a business trip and enjoys her conversations with them.

Kim, known to be in an extramarital relationship with the director, was awarded Best Actress for her role in “On the Beach at Night Alone.”

At the press conference after the awards ceremony, Hong said he did not intend to make a film that reflects social issues in the first place.

“I live in a small world, with very small details coming one after another,” Hong said. “I try not to have any intentions as much as I can [when making films]. I try to push away the premature definition of what I’m doing.”

He said he does not create films on a big scale and does not work with big-name studios, but instead maps out a story from a small beginning and writes the script just one week before shooting.

“Either I have a place in mind or I have a few actors in mind. Then I decide to shoot a film,” said the art house director, who also wrote the screenplay of “The Woman Who Ran.” “One week before shooting, or sometimes a few days before shooting, I’m forced to come up with the first scene or sequence.”

Hong’s win in Berlin is another achievement for Korean cinema, following Bong Joon-ho’s “Parasite,” which won the top honor at the Cannes Film Festival last year and Best Picture at this year’s Oscars.

Meanwhile, the Berlin festival’s highest prize, the Golden Bear for Best Film went to “There Is No Evil” by Mohammad Rasoulof. The Grand Jury Prize was given to “Never Rarely Sometimes Always” by Eliza Hittman.

The former explores the moral dilemmas thrust on those who carry out executions and the consequences of defiance for them and those around them.

Director Mohammad Rasoulof, whose film shows that there are costs to both bravery and cowardice, was not allowed to leave Iran to pick up the award; he faces propaganda charges over his earlier films.

His daughter Baran, who stars in one chapter of the four-part film, accepted the award on his behalf in the German capital. She later held up before the cameras a smartphone on which the director addressed a news conference by video call.

“This film is about people taking responsibility,” he said.

“I wanted to talk about people who push responsibility away from themselves and say that the decision is taken by higher powers. But they can actually say no, and that’s their strength.”

Each of the film’s chapters depicts a man chosen to carry out an execution; some refuse, and some obey. But whichever path they choose, the consequences, good and bad, for them and their loved ones, echo through the decades.

Shot indoors at night, or in remote rural locations to avoid catching authorities’ attention, the film carried risks for the cast and crew, who had themselves made a decision to “put their lives in danger to make this film,” said producer Farzad Pak.

The jury president, British actor Jeremy Irons, hailed the way the film showed “the web an authoritarian regime weaves among ordinary people, drawing them toward inhumanity” and noted that the film’s lessons about individual responsibility went far beyond Iran.

Asked about suggestions circulating on Iranian social media that the film was being favoured for its political message, producer Kaveh Farnam said, “Every time that an independent Iranian film wins an award, the regime says that it’s all worthless, they say that we’re exploiting the situation in the West.”