Moon calls for unity in fight against virus

Moon calls for unity in fight against virus

President Moon Jae-in called Sunday for national unity in the fight against the new coronavirus in line with the spirit of a historic independence movement a century earlier and suggested close international cooperation against such an unconventional threat, including partnerships with North Korea.

“The March 1 Independence Movement once again reminds us that we can prevail over anything as long as we stand together,” he said in a televised speech to commemorate the 1919 public uprising here against Japan’s colonial rule. “All the people will come together and overcome even today’s crisis without fail.” 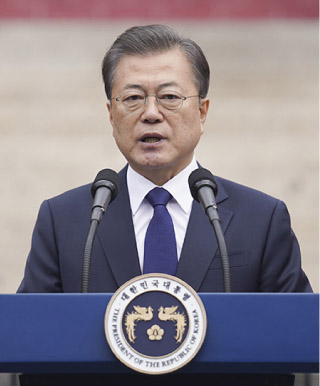 President Moon Jae-in delivers his speech at the ceremony on Sunday commemorating the March 1 Independence Movement against Japanese rule. [YONHAP]

While Moon was present at the scaled-down official ceremony held at Paiwha Girls’ High School near the Blue House, South Korea’s health authorities announced a sharp rise in the number of confirmed cases. The Korea Centers for Disease Control and Prevention put the number at 3,736, up 586 from the day earlier.

Moon repeatedly used the words “unity,” “courage” and “hope” during his address.

Usually, South Korea’s president issues messages on Seoul-Tokyo relations or Korean Peninsula peace via a March 1 Independence Day speech. This time, however, Moon focused more on a call for trust and unity in the face of the fast-spreading virus, largely in Daegu, a city of 2.4 million residents located 300 kilometers (186 miles) southeast of Seoul, and nearby North Gyeongsang, with most cases there linked with a mysterious religious group, known as Shincheonji, which means new world in Korean.

“The Covid-19 [the official name for the virus] outbreak can threaten our lives temporarily, but it cannot break our unity and hope,” he stressed, saying South Korea will eventually “win the battle against Covid-19 without fail and revive our economy, making it more dynamic.”

He pointed out that South Korea has overcome “countless hardships,” including the aftermath of the 1950-53 Korean War and Japan’s ongoing export control of some key industrial materials.

“Daegu and North Gyeongsang are never alone,” Moon said. “Even now, the people are all coming together. We will be able to overcome the Covid-19 outbreak and revive our shrunken economy.”

He reaffirmed a commitment to spending reserve funds swiftly and pushing for a supplementary budget. Moon earlier put the country on the highest-level crisis alert.

“These are difficult for a single country to resolve through its own ability alone,” he said. “We’ve come to keenly realize once again the necessity of cross-border cooperation at this time due to the global spread of Covid-19.”

He expressed hope for inter-Korean cooperation on health care, saying the Korean people would be “safer” when the two sides respond together to infectious diseases.

“By overcoming the pressing Covid-19 outbreak at home and achieving peace and common prosperity on the Korean Peninsula, we will build a Republic of Korea that cannot be shaken,” Moon said. “That is genuine independence and the completion of a new independence. The government will take the initiative and do everything it can.”

On Japan, he again suggested forward-looking ties based on reflecting on the past.

“Japan is always our closest neighbor. When we squarely face the past, we can surmount wounds and move forward toward the future,” he said. “Joining hands while reflecting on history is the path toward peace and prosperity in East Asia.”

He added, “We will not forget the past, nor will we remain in it. I hope that Japan will also take on the same attitude.”

He suggested the neighbors cope with crises together and “make joint efforts for future-oriented cooperative relations,” once again stating Seoul’s two-track approach to endeavor to resolve history-related issues and seek to strengthen partnerships on regional security.

Meanwhile, Moon broke news that the remains of Hong Beom-do, a famous Korean independence troop commander who claimed victories in major battles against Japan, would be “repatriated finally” from Kazakhstan.

“To commemorate the 100th anniversary of the Battle of Fengwudong this year, the remains of Gen. Hong will be repatriated and buried in his homeland on the occasion of the Kazakh president’s visit to Korea,” Moon said without elaborating.

The high school, where the national ceremony took place, is symbolic of the history related to the independence movement.

On March 1, 1920, dozens of its students organized a rally on the occasion of the first anniversary of the movement, and some pro-independence fighters served as teachers there.