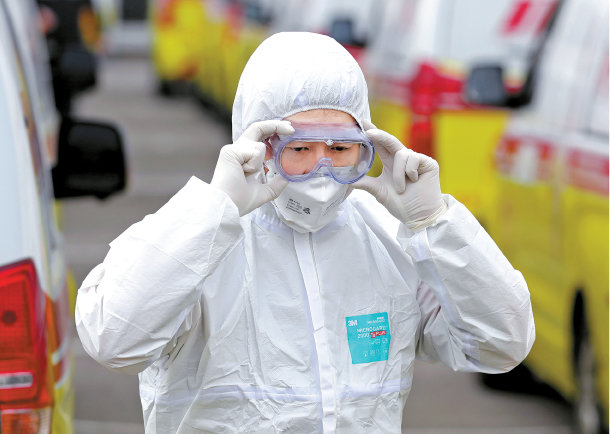 A firefighter puts on protective gear to get himself ready for transporting patients in an ambulance in Daegu on Sunday. [YONHAP]

Korea reported another major spike in novel coronavirus infections Sunday, bringing the country’s total to 3,736, but a severe shortage of hospital beds in Daegu have left hundreds to fend for themselves at home.

The virus also claimed three more victims, including an 82-year-old man in Daegu, who died from complications of the infection. The man had been suffering from a number of other health issues like high blood pressure and diabetes and had suffered a stroke, said an official from the Korea Centers for Disease Control and Prevention (KCDC).

In an afternoon briefing, the KCDC announced 586 people tested positive for the virus on Sunday, with most of the new infections - 536 - reported in Daegu and North Gyeongsang, the epicenters of the virus outbreak in Korea.

A total of 13 were reported in South Chungcheong, 10 in Seoul, eight in Gangwon, seven in Gyeonggi, four in South Gyeongsang, three each in Busan and Ulsan and one each in North Chungcheong and North Jeolla.

A 45-day-old infant also tested positive for the virus in Gyeongsan, North Gyeongsang - making him the country’s youngest confirmed patient, health authorities said. The child’s father is a member of the Shincheonji Church of Jesus, the controversial Christian sect that has been at the center of the coronavirus outbreak here since an adherent of its Daegu church tested positive on Feb. 18.

In Daegu, Korea’s fourth-largest city with a population of 2.5 million, a massive spike in confirmed cases has led to a shortage of hospital beds to accommodate the newly infected.

Of the 2,705 total number of patients reported in Daegu, only around 900 have been hospitalized so far, while the rest remain quarantined in their homes as they await openings.

Acknowledging the limited medical resources the government had at its disposal, Prime Minister Chung Sye-kyun on Sunday said the number of infections was growing too fast when compared to the facilities available to treat new patients.

“With the method that we have now, in which we hospitalize all patients infected with the new coronavirus, it is difficult to prevent tragedies where people die while waiting to be hospitalized,” Chung said.

On Friday, a 69-year-old virus patient in Daegu died just an hour after she arrived at a local hospital complaining of breathing difficulties following days of self-quarantine. On Thursday, a 74-year-old man died under similar circumstances.

Health authorities said they were prioritizing beds for those with severe symptoms of the virus and that a 24-hour hotline service is in operation to keep in contact with all patients.

In a briefing on Sunday, Daegu’s city government said it was in talks with the central government over using vacant school buildings or training centers to lodge patients but that current quarantine laws mandated infected patients be treated only at designated hospitals.

In response to the shortages, Health Minister Park Neung-hoo on Sunday afternoon said the government would, starting from Monday, accommodate all virus patients in Daegu with mild symptoms at the Ministry of Education’s National Education Training Institute building in the city, while those with more serious symptoms would be hospitalized.

The sharp increase in Korea’s virus cases in recent days can be attributed to the government’s extensive testing of Shincheonji followers. On Saturday, health authorities said they surveyed 88 percent of 190,000 members selected out of a list of around 210,000 total followers submitted by the church. Only 3,381 of those surveyed said they had experienced symptoms of the virus, all of which will be subject to testing or have already been tested.

Questions have been raised, however, as to whether the records provided by the church are reliable. Shincheonji, which mainstream churches in Korea regard as a cult, has been accused of deliberately omitting members from submitted records in order to conceal sensitive information on its secretive practices.

Local governments in particular say membership records they received from the church fell significantly short of the numbers obtained through official investigations.

Daegu filed a police complaint Thursday after records of church members it received from the central government contained around 2,000 more names than the list it received from Shincheonji’s Daegu branch.

On Sunday South Gyeongsang Governor Kim Kyoung-soo said he would take legal action against the sect for violating laws on infectious disease prevention, adding that there was a discrepancy of 540 people between official and submitted records. Gwangju’s metropolitan government also warned that it would file a police complaint if the sect did not immediately submit a complete membership list.

Lee, the 88-year-old whose followers regard as a physically immortal messiah figure, will be tested for the coronavirus in the near future, Shincheonji representatives said Sunday. Lee has not made a public appearance since his church emerged as the nexus of the virus outbreak last month and is believed to be lying low in a residence somewhere in northern Gyeonggi.

Prosecutors are already in the midst of an investigation into Lee and church leaders for violating health laws, after a civic group opposed to the church filed a complaint on Thursday.

The government has also been conducting a comprehensive investigation into how the virus first began to spread among worshippers last month.

The Ministry of Justice on Saturday submitted entry records to the KCDC that showed 42 Shincheonji followers visited the Chinese city of Wuhan from July 1 last year to Feb. 27. The latest visits occurred in January, according to health authorities.

Wuhan, located in Hubei Province, is where the virus first emerged in December. According to the church’s director of international missions, there are 357 Shincheonji members in Wuhan.

The records showed that out of the 33,281 non-Korean worshippers identified by the church, 38 entered Korea within the same time frame. One of them was from Wuhan.

“The number of [Shincheonji] believers who visited Wuhan does not appear to be large, and the matter remains under investigation,” said Kwon Jun-wook, spokesman of the Ministry of Health and Welfare.

The Justice Ministry added that the numbers it submitted were liable to change given that the list of members submitted by the church was incomplete.