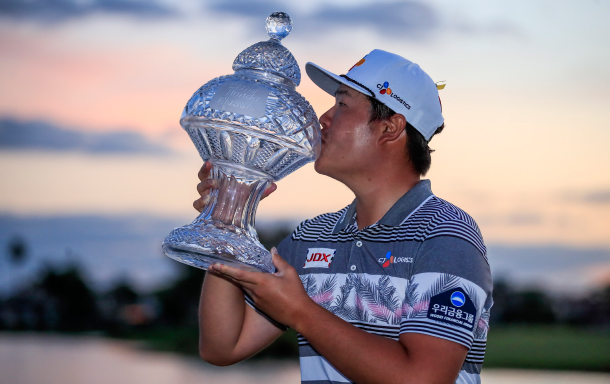 Im Sung-jae finally picked up his first win at the Honda Classic at PGA National Resort and Spa Champion Course in Palm Beach Gardens in Florida on Sunday, his 50th tournament on the PGA Tour.

With a four-round total of six under par, 274, Im finished one shot ahead of runner-up Mackenzie Hughes of Canada. Having started the final round tied for fifth, three shots behind the overnight leader Tommy Fleetwood of England, Im got off to a strong start by making four birdies in his first five holes.

Although he saw some trouble throughout his round with back-to-back bogeys on the par-4 12th and the 13th, he quickly made up for it. Im didn’t see much trouble getting through the “Bear Trap,” the three-hole stretch at the PGA National’s Champion Course from the 15th to the 17th. He first made a birdie on the par-3 15th by making a seven-footer and successfully saved par from the bunker on the par-4 16th. Then, he finished off the three-hole stretch by adding another birdie on the par-3 17th, which also allowed him to take a one-shot lead ahead of Hughes.

With seven birdies and three bogeys, Im shot four under par, 66, on the final day, good enough to clinch a one-shot victory to become the seventh Korean golfer to win on the PGA Tour.

“After being so close so many weeks and even after having a bunch of top-10s, and just using that experience this week was big,” Im said. “I just hope to really work hard and move forward and become a winner again real soon.”

Im became only one of seven Korean golfers to win on the PGA Tour, but interestingly, he’s not the first one to win the Honda Classic. Back in 2009, Yang Yong-eun, better known as Y.E. Yang, who is also from Jeju Island, won the same tournament.

With a win, Im took home the prize money of $1.26 million, as well as 500 FedEx Cup points, moving up to second in the FedEx Cup standing. He is now ranked 25th in the world, nine spots higher than the previous week. Although Im is only in his second season on the PGA Tour, the 21-year-old has been in the spotlight for quite some time.

Born in 1998 on Jeju Island, Im started his career in the United States in 2018 after playing on the KPGA and the Japan Golf Tour.

He began the Korn Ferry Tour without many expectations but wasted no time getting recognition by winning the season opener. This allowed him to become the 16th player to win the event in their first appearance and the seventh Korean-born golfer to do so on the Korn Ferry Tour.

He went on to finish his season strong by winning the season finale. Although Im didn’t have a win between the first and last tournament of the season, he has still managed to maintain the top spot on the Korn Ferry Tour money ranking, the only player to do so in the Tour’s history.

Im earned his PGA Tour status card and was also named the Korn Ferry Tour’s Player of the Year and the Rookie of the Year.

Im improved even more in his rookie season on the PGA Tour. Throughout the 2018-2019 season, Im competed in 35 tournaments and made 26 cuts, seven of which he finished in the top-10. This was good enough for Im to win the PGA Tour’s Rookie of the Year, becoming the first-ever Asian-born golfer to be awarded the honor. His consistency also earned him a spot on the 2019 Presidents Cup for Team Ernie Els’ Team International.

Despite all his achievements on the PGA Tour, Im was missing just one thing until Sunday - “a win.” Behind his victory, Im said his experience at the Presidents Cup helped him overcome the pressure.

“[Captain] Ernie talked about winning, and the players really wanted to win, too,” Im said. “Through that tournament I learned to overcome the pressure, and through that experience I wasn’t as nervous today. So I think last year’s Presidents Cup helped a lot.”

“I get to compete at The Masters for the first time this year,” Im said. “I really want to make the cut and see good results at the majors and I hope that to be at The Masters.”

Looking at Im’s schedule, he’s been keeping himself busy and hasn’t really taken a break from competing.

“I think I’m going to take a break from the Texas Open, but until then I plan on competing in all [of the tournaments],” Im said. “Honestly, I’m just happy that I can compete on the PGA Tour, so I want to play in as many tournaments as possible.”