Twins give Jeong Keun-woo a new lease on life

Twins give Jeong Keun-woo a new lease on life 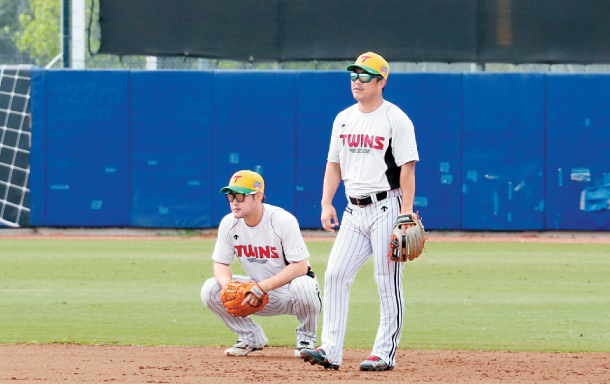 Jeong Keun-woo was once considered the KBO’s best second baseman, but as he got older he seemed to lose some of that flair. That was until he joined the LG Twins this year.

A year ago for 2019 spring training, Jeong had to pack three different gloves - for first base, second base and for outfield - to train for the Hanwha Eagles. However, after joining the Twins this season through the second round draft in November 2019, he no longer has to worry about switching positions.

“I’m confident in my physical strength,” Jeong said. “Now that I’m back as a second baseman, I need to help the team.”

The second round draft was created based on the major league’s Rule 5 draft. In December every year in the major league, the Rule 5 draft allows teams to draft young players who are already playing in the minors. The KBO established the second round draft with the same idea - giving players stuck in the Futures League, or veterans, a second shot at the KBO. The system was established in November 2011, and last year marks the fifth edition.

The Twins’ decision to select Jeong was quite a surprise as he’s considered on the older side and didn’t see much action with the Eagles throughout the 2019 season. The biggest surprise of all was that Jeong was excluded from the Eagles’ 40-man roster. While the Eagles didn’t see hope for Jeong, the Twins’ manager Ryu Joong-il certainly did. He said, “We brought [Jeong] to use him as a second baseman.”

Back when Jeong was younger, he was one of Korea’s best second basemen. He briefly played as a shortstop for the SK Wyverns in 2005, but he mostly kept his spot at second base. He was most famous for his speed, accuracy and defensive skills.

He continued his streak even after joining the Eagles in 2014. In the KBO, Jeong holds the record for the most number of career hits, at 1,840, and stolen bases, at 364, as a second baseman.

But in the past two years of his career, he slowly began to lose his spot as a second baseman. Making matters worse, as the Eagles were going through a generation change, Jeong’s spot was transferred over to a rookie. During the mid-2018 season, he appeared as a first baseman or even as an outfielder.

Last season, he played in 31 games as a first baseman and 52 games as a center fielder, but none as a second baseman. He was slowly getting forgotten, but Ryu believed that Jeong still had a competitive edge.

Since the Twins’ second baseman Jung Ju-hyeon was lacking experience, Ryu drafted Jeong so the two players can share and compete for the starting position throughout the season.

“When I was at my peak, I just automatically thought that spot was mine,” Jeong said. “Once I lost it for about two years, I learned how special that spot is. Ju-hyun has a wider range of defense and has a lot of strengths. He needs more experience and self-belief, but that’s all he needs.”

With his positive personality and leadership skills as a veteran, Jeong didn’t have much trouble blending into the team. Now that he’s completed his adjustment with the Twins through spring training, Jeong hopes to help them advance all the way to the Korean Series this year, which the club hasn’t done since the 2002 season.