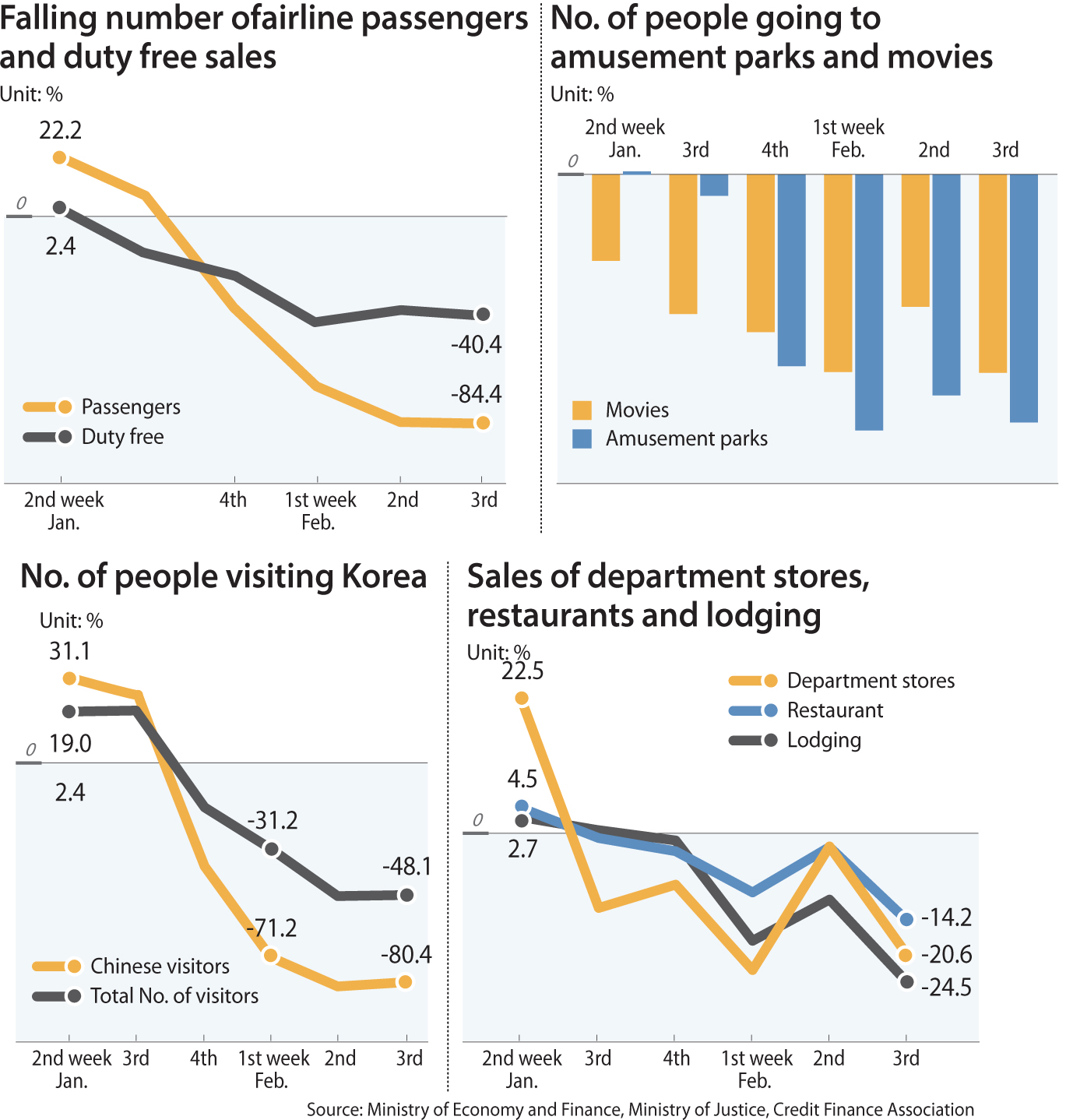 Early 2020 statistics are trickling in, and they are starting to show what many are already expecting: The economy has done an about face.

Signs of recovery were evident late last year, with a strengthening of semiconductor prices and a rise in key indices. Then came the coronavirus outbreak, and the indicators promptly went south, according to data from the Credit Finance Association and the Justice Ministry.

The number of people visiting Korea in the third week of February was down 48 percent on year, while the number of Chinese visitors dropped 90 percent. Some aircraft are leaving Korea empty to pick up passengers returning home to Korea.

With factories in China shut because of the outbreak and resulting restrictions, the supply chain is seizing up, while some factories and offices in Korea have been closed because of infected employees. Out of concern for their health, consumers are staying home.

A boomlet has thus turned to a bust.

In the second week of January, department store sales grew by 22 percent on year, according to the Credit Finance Association. In the third week of February, it fell 20.6 percent.

The same pattern can be seen throughout the economy.

In January, the totals averaged 8 trillion won ($6.7 billion) every week. In the first week of January, that number fell to 6 trillion won. By the third week of February, the statistic hit 7.27 trillion won but was still lower than the January average.

In retail, discount malls have been hit as consumers try to avoid large crowds, but in the third week of February, the numbers did tick up as people started stocking up on food.

Other pockets of strength have been identified. Online shopping sites have done well, as many people have preferred to stay home and order from the internet.

Convenience stores have also done well. People living alone have been stocking up at these establishments and buying protective masks from them.

In the first month of the year, the retail sales index, which is used in reading consumer spending trends, shrunk 3.1 percent compared to the previous month.

It was the first decline in the index in nearly nine years. It fell 7 percent on month in February 2011 as the country was affected by the foot-and-mouth disease as well as the severely cold weather.

Signs of the coronavirus affecting the country’s industrial output were also detected in January.

Facility investment was down 6.6 percent compared to the previous month, while industrial production only inched up 0.1 percent.

Given the worsening of the outbreak since then and the halting of production lines, the numbers probably continued to fall in February.