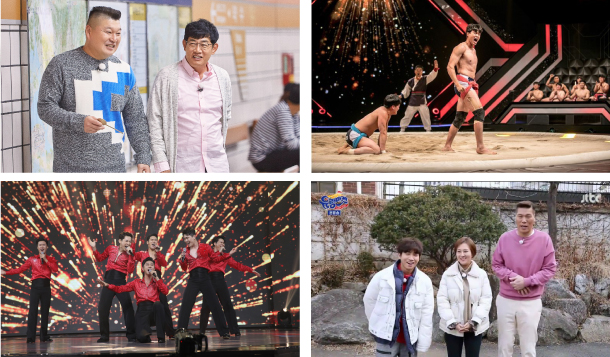 Shows filmed in front of large audiences in confined spaces or that require lots of interaction are either shooting episodes without crowds or delaying their shows altogether. Clockwise from top left, JTBC’s “Dining Together,” KBS’s “The Ecstasy of Ssireum” (translated), TV Chosun’s “Mr. Trot” and JTBC’s “Yurang Market” have all amended their shoots due to the ongoing coronavirus outbreak.[JTBC, KBS, TV CHOSUN, JTBC]

TV networks are struggling to kill two birds with one stone as more viewers tune in while stuck at home trying to avoid the coronavirus outbreak, while also trying to protect on-air talent and production staff.

Variety shows and programs are taking necessary precautions to continue filming and stay on air. The highly popular “Mr. Trot” canceled the filming of its final round on Feb. 24 after the government raised the alert level from “caution” to “serious” the day before. Six hundred people were originally scheduled to attend the show at the Studio Paradise located in Incheon. Instead, the show was taped without an audience on Monday. It will air on Thursday evening at 10 p.m.

The final round of the popular KBS show “The Ecstasy of Ssireum” (translated) aired on Feb. 22 without an audience in attendance.

JTBC’s “Yurang Market” will not be filming this week, but there are not any plans to cancel the show, an insider told the Korea JoongAng Daily. The show, which began on Feb. 16, shows the hosts visiting their guests’ homes to sell objects that the owners no longer need to other people living in the area. The SBS program “Running Man,” which celebrates its 10th anniversary this year, announced on its Feb. 16 episode that the cast originally planned to go to Europe but has decided to host their games indoors in Korea for the time being.

However, some shows have been halted altogether, especially programs that rely on interactions or traveling overseas. Cable channel tvN’s “The Brainiacs” and “Thrifters on Tour” decided to temporarily pause their shows. The former cancelled its show from Feb. 20. Both programs will be replaced by reruns of the cable channel’s drama series.

According to a report from local media outlet OSEN, JTBC’s “Dining Together” hasn’t been filming since February “for the sake of safety of the hosts, guests, production staff and citizens.” While the show has continued to air episodes that were filmed ahead of time, from this Wednesday they will be substituting the show with another program.

Various drama series, however, still have their cameras rolling as their schedules cannot be delayed or substituted by other programs. Plus, most shows are seeing their viewership ratings climb higher than ever.

SBS drama series “Dr. Romantic” and tvN’s “Crash Landing on You” each recently ended with their highest viewership ratings, respectively recording 27.1 percent and 21.8 percent. “Crash” set a new ratings record for the cable channel that was previously held by “Goblin,” which ended with a 20.5 percent rating. Although the two shows were popular before the epidemic, their ratings began to climb at the end of January when the dangers of the virus became more prevalent.

Despite the temptation of chasing after ratings, some have voiced concerns about the ongoing production environment. Last week, actor Jin Seo-yeon confided on Instagram that she was “scared and worried” about working. Jin is currently appearing on the OCN drama series “Tell Me What You Saw.”

“There are almost one hundred actors and production staff working together on set while there are no masks available,” Jin wrote. “Still, they say we need to continue filming, which sounds simply outrageous. I’m so scared of going home [for my family]. I’m so scared that [they might be infected] because of me. I’m so sorry for my children.”

On Sunday, tvN drama series “Hi Bye, Mama,” starring actors Kim Tae-hee, Lee Kyoo-hyung and Go Bo-gyeol, reported that one of the show’s staff members was suspected of being infected with the virus and is in quarantine. However, an insider said that the staff member’s tests came out negative and the drama will be continue to follow its original schedule.

Although production staff are doing the best they can to stay safe, the risk remains high as shoots can take place in confined spaces with large groups of people.

The Korea Entertainment Management Association also criticized the current preventive measures taken by the drama productions through a statement last week. It said that while it understands the loss involved if the production fails to air, it still implored staff members to strictly follow the sanitary measures recommended by the Korea Centers for Disease Control and Prevention.