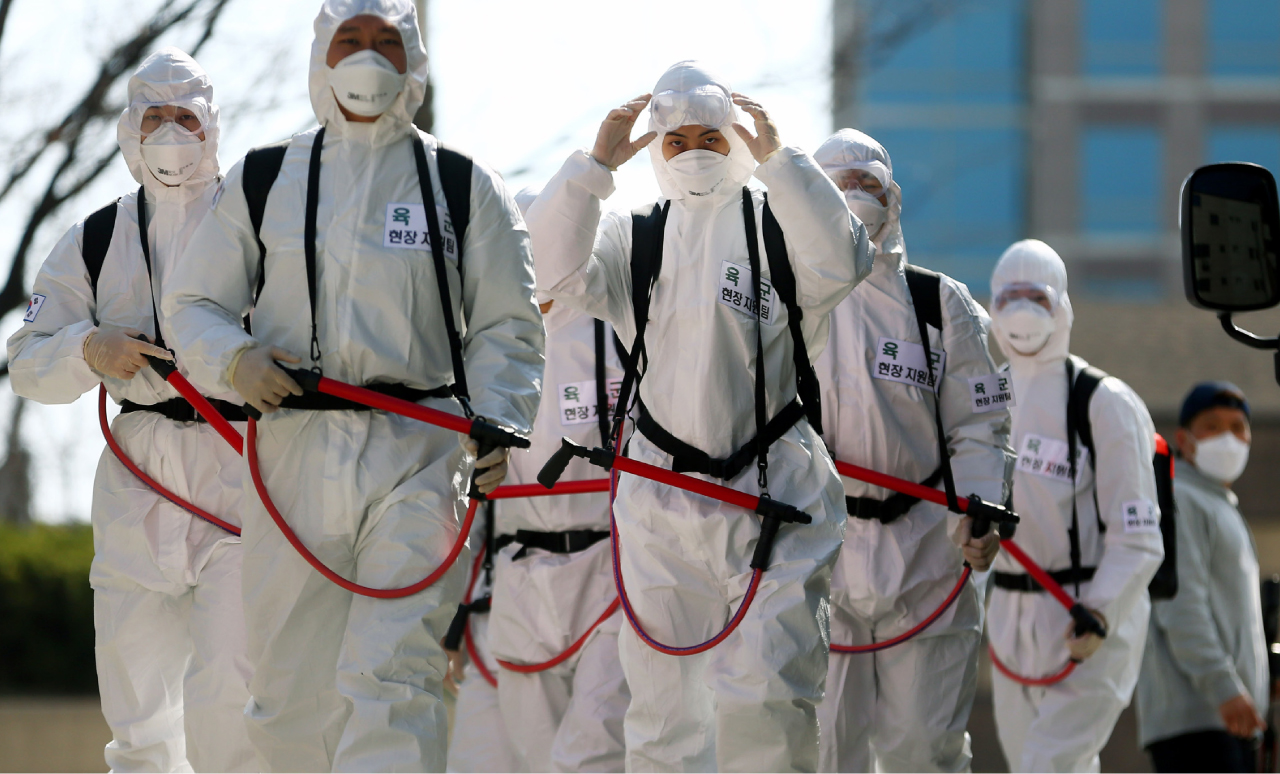 Army soldiers are mobilized to disinfect Daegu City Hall on Monday to prevent the spread of the coronavirus.[YONHHAP] 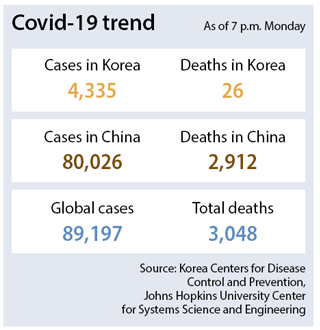 Coronavirus infections surpassed the 4,000 mark Monday as 599 patients were added by the government’s daily count, only two days after the nation breached the 3,000 mark.

By Monday at 4 p.m., 599 more infections were counted by the Korea Centers for Disease Control and Prevention (KCDC) than the day before, bringing total infections to 4,335.

The latest infections were again mostly from the southeastern city of Daegu and surrounding North Gyeongsang, where a large church in Daegu of the Shincheonji religion has been the epicenter of Korea’s outbreak.

The death toll stood at 26 by Monday at 4 p.m., eight more than the KCDC’s total count by Sunday at 4 p.m. The latest deaths were all senior citizens in Daegu, mostly with underlying illnesses such as high blood pressure or diabetes.

Among Korea’s 4,335 coronavirus patients, 31 have been discharged from hospitals after full recoveries by 4 p.m. Monday, and the KCDC said in a press conference earlier that day that 19 people were in critical condition.

By 10 a.m. on Monday, 92 patients had been confirmed in Seoul, six more than from 4 p.m. on Sunday. Eleven patients so far were from Jongno District, central Seoul, while 12 were from Songpa District, southern Seoul.

Korea’s infection tally rose Monday as government officials went down a list of Shincheonji worshippers and tracked their movements, a process that’s been going on for a couple of weeks - and extensively in the past couple of days - since a mid-aged female Shincheonji adherent in Daegu, Patient No. 31, tested positive for the virus on Feb. 18.

Patient No. 31 was the first known case linked to Shincheonji’s church in Daegu, and more than 2,000 infections have been traced to the same church building since, either in churchgoers or people who contacted them.

Shincheonji, also known as the Shincheonji Church of Jesus, which other mainstream churches in Korea consider a cult, announced Monday that its leader, Lee Man-hee, tested negative that morning.

In his first public appearance since the outbreak began, Lee fell to his knees in front of a throng of media Monday at a press conference in Gapyeong County, Gyeonggi, and apologized for the spread of the virus. 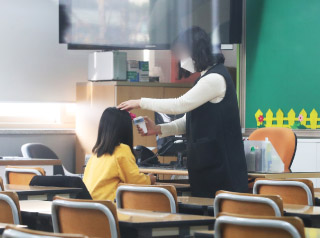 A teacher checks a student’s temperature in a classroom at an elementary school in Suwon, Gyeonggi, on Monday. Many schools are running day care services for students whose parents work even though the spring semester opening has been postponed. [YONHHAP]

In a roundup analysis of Korean infections so far, KCDC Director Jung Eun-kyeong announced in a 2 p.m. briefing Monday that nearly 60 percent of all coronavirus cases in Korea have been traced to Shincheonji’s church in Daegu.

Jung’s press conference was based on statistics tallied by Sunday midnight and did not include the 123 infections that were released at 4 p.m. on Monday.

How the virus first reached the hospital or the Shincheonji church community is still a mystery, though the brother of Shincheonji leader Lee was hospitalized at Daenam for five days in late January. His funeral was held there, too, and Shincheonji adherents are known to have visited.

No major group infections other than those related to Shincheonji and Daenam Hospital have been discovered in Korea.

Jung continued in Monday’s press conference that the number of female patients was about 1.6 times higher than the male cohort and that the most infected age group was people in their 20s.

“By age group, people in their 20s account for 29.3 percent of total infections,” said Jung, “Women in their 20s and 30s make up a large percentage of Shincheonji adherents, so I think that’s why we’re seeing so many infection cases from that age bracket.”

The Education Ministry announced Monday that all kindergartens, elementary, middle and high schools across the nation will be forced to postpone their start dates for the spring semester by an additional two weeks, longer than the single-week postponement announced late last month.

Schools will open on March 23, but the Education Ministry said some regions may face another postponement depending on circumstances of the outbreak.

Students will be told to stay at home and study with online materials, education officials said.

For universities, the Education Ministry advised schools to voluntarily postpone their start dates for up to four weeks and replace their courses with online classes.

The advisory for universities came on the heels of a positive test result from a 21-year-old Chinese student attending Catholic Kwandong University in Gangneung, Gangwon. The Chinese student was diagnosed with the coronavirus on Sunday morning after returning to Korea from Shenyang Taoxian International Airport in Liaoning Province, northeastern China, last Friday afternoon.

The case was the first known time that a Chinese student studying in Korea tested positive for the coronavirus. Gangwon officials said the student was allowed to pass airport screenings because he didn’t show any symptoms upon his arrival Friday.

President Moon Jae-in on Monday visited the Armed Forces Daejeon Hospital, which was designated by the government last month to specialize in treating coronavirus patients, to be updated on the military’s battling of the outbreak. Moon noted that over 1,400 military medical personnel, nearly a quarter of the military’s entire medical forces, have been mobilized to treat patients in the epidemic.

Moon then visited the Korea Armed Forces Nursing Academy in Daejeon, where he observed graduates-to-be receiving training for virus treatment. Seventy-five newly commissioned nurse officers will be dispatched to Daegu to serve on the medical front lines after graduating from the academy today. The academy advanced its graduation ceremony by nearly a week for the mission.