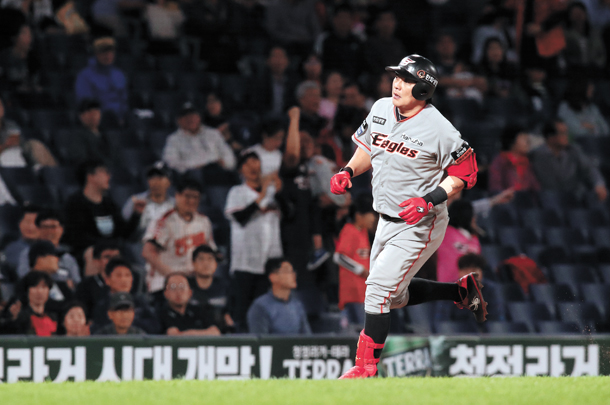 Kim Tae-kyun rounds the bases after hitting a home run during a game last season. [NEWS1]

Kim Tae-kyun has only ever known the Hanwha Eagles.

Since he joined in 2001, he’s quickly become the team’s slugger and one of the hottest players as a one-club man. And it’s not only the Eagles who recognize Kim’s talents.

He was also a regular pick on the Korean national baseball team. But along with the fame came the added criticism toward Kim and toward the Eagles.

However, as he got older, Kim’s hot streak started to cool and his 2019 season was perhaps the most disappointing of his 17 seasons.

Last season, both the Eagles and Kim failed to meet the expectations of the fans and finished the regular season ninth, with 58 wins and 86 losses - a 0.403 winning percentage.

It came as a huge disappointment to the Eagles fans as the club finished third in the season in 2018, enough for it to advance to the postseason for the first time in 10 years. Since the Eagles made no changes to the roster, the ninth sport finish the following season came as quite a shock.

As for Kim’s statistics just for the 2019 season, he’s managed a 0.305 batting average but was far from fulfilling his role as the club’s cleanup hitter, as he only hit six home runs throughout 127 games.

Once the season ended, Kim earned his free agent (FA) status for the third time in his career and once again re-signed with the Eagles. Although the club tried to guarantee Kim a two-year contract, Kim instead decided to sign a one-year contract at 1 billion won ($838,000), in hopes that he can redeem himself and get re-evaluated.

Currently training in Mesa, Arizona, Kim is hoping to reignite the high expectations the fans have for him and make sure the 2020 season won’t be the last of his career.

A. Our manager Han Yong-duk has been leading the players in a comfortable atmosphere, and when they’re having a tough time, he manages that well too. Also, since [Lee] Yong-kyu was named the captain this year, I think he’s prepared a lot even before he got to spring training. He’s trying to get along with the young players and including myself; he’s working hard to be the bridge between the [young and] veteran players. Young players are training hard, so overall I think the team has a great vibe.

What are you focusing on at this year’s spring training?

I’m trying to hit the ball right at the middle of the bat, to be more accurate. It works well when I’m practicing, but it doesn’t really work in real games. For now, I’m trying to increase the amount of training, on purpose, to make myself tired because I have to get my condition up to level for the opening game. So right now, my body feels very heavy and tired.

Looks like you’ve lost a lot of weight. How much did you lose?

I haven’t weighed myself so I’m not sure, but I’ve heard a lot of people telling me that. I didn’t try to lose weight, but I think I did by increasing the amount of weight training I do. Previously, I spent more time in skills training during spring training and I didn’t have enough time to focus on weight training. But this year, I’m focusing more on weight training so that’s helping me lose weight.

You’ve earned your free agent (FA) status for the third time in your career after the 2019 season and you’ve signed a one-year contract. When you signed, you said this is a new challenge to yourself. What did you mean?

I needed a new mindset. A one-year contract for a player of my age can definitely be seen as a risky decision. But I’ve made that decision because I personally needed new motivation. I thought that I needed to start this season from scratch just like back when I was a rookie, when I worked really hard to try to earn my spot [in the starting lineup]. So this just has to be a challenge to myself.

Did you feel that this year’s FA signing negotiations were different from the past two signings?

Rather than feeling like it was a different situation, I felt that I wasn’t good enough. The atmosphere of the [FA] market was a lot different than when I signed [the two previous FA] contracts. But I can’t do anything about it because that’s the reality. I had to accept those parts and in the process of accepting, I needed new motivation.

You were the one who wanted to sign a one-year contract instead of two. Was that to motivate yourself?

Yes. Since I didn’t think that this season would be my last one, I signed a one-year contract and I wanted to show that I’m not done yet. I want to get recognized for my skills by playing well this season and I didn’t want to put myself in a situation where I got to stay with the team by signing a guaranteed long-term contract, despite playing poorly. By signing a one-year contract, I can let go easily if I felt that I had reached my limit.

It sounds like you want to be the one to decide when to retire, instead of the club. Is that right?

I didn’t want to do things that I’ll regret after I retire. If I were to sign a two- to three-year contract and finished those seasons meaninglessly, then I feel like I would have a lot of regrets. That’s why I had to think about it a lot to come to this decision. In the end, I came to the conclusion that I am going to give it my all, thinking that this is my last and have no regrets in regards to whatever decision I make. I just wanted to give myself an opportunity to make my last decision [as a pro].

I’m sure all the players say this, but this is the club I joined that allowed me to achieve my dream of becoming a professional player and made me “Kim Tae-kyun.” So of course, this team is special to me. Since I was raised in this area, I dreamed of joining this club when I was training, I was excited and nervous about wearing that uniform.

When I played on the same team with big-name players like Chang Jong-hoon, Song Jin-woo and Jeong Min-chul, it felt different and I learned a lot. Since I once played with our manager and general manager and went through the hard times together, they motivate us and make us stronger. Including myself, as the young players also have thoughts of wanting to become like them, we get this strong sense of being “one team.”

You’ve went through all the good and the bad times the Eagles had. What are you thinking these days?

Looking back, I was a part of the team when the Eagles finished runner-up in the Korean Series [in 2006]. I was young at the time. All our senior players were good, individually, and they led the younger players very well. Our team had this atmosphere where we had nothing to worry about but ourselves. I think that great players managed to balance [the team] well at the top and gave trust [to the players] and this led the team to success.

On the other side, looking at our poor performance in recent seasons, I think that is the result of veterans, including myself, not being able to balance the team well enough. In that area, I feel a big responsibility.

How and what are the Eagles’ veterans doing to lead the young players?

They are all working hard. All our senior players like Lee Yong-kyu, Choi Jin-hang and Song Kwang-min feel the responsibility to lead the younger players. In the end, everything is based on the result and that’s why I can only say this. We made a great atmosphere in 2018 [when the Eagles finished third in the regular season] but last year, we dropped toward the bottom of the standings again. That was the biggest disappointment. To get back to the postseason this year, my role is important too. So I also want to play better and bring back the good vibe.

What is your standard of “success?”

Having played baseball for almost 20 years, I’ve never set my goal in numbers. But as the time passes, I believe that the expectations that the fans, club, manager and coaches have on Kim Tae-kyun in the past and present have changed, a lot. It may be difficult to be like before, but I want to at least recover the trust that dropped to rock bottom [last year]. I want to become a player that when I get at-bats, everyone expects me to do something.