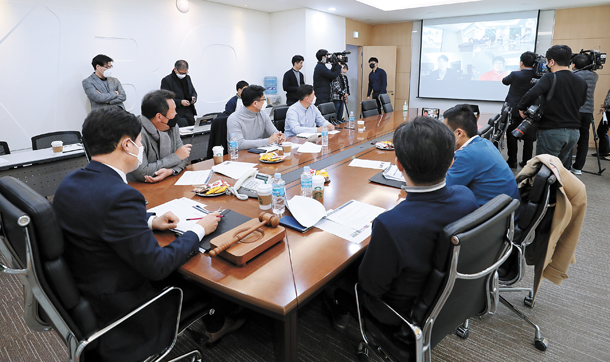 KBO officials and general managers from the 10 clubs hold an executive committee meeting at the KBO headquarters in Seoul on Tuesday. General managers who are away with the clubs’ spring training joined the meeting via video call. [YONHAP]

It’s not only the local league and events that are being affected by the coronavirus. Korean athletes both at home and abroad are now finding themselves in a bind.

Since the outbreak of the coronavirus, a number of countries have implemented either entry bans on Korean travelers or bolstered quarantine measures. And one of Korea’s most well-known sport stars Son Heung-min is set to face those measures when he makes his return to his English Premier League team Tottenham Hotspur after he traveled back to Korea to undergo surgery on his elbow.

He’s not the only football player caught in the coronavirus crossfire.

The Korean national football team, which is competing in the second round of the Asian qualifier for the 2022 FIFA World Cup, is set to postpone its upcoming match.

Korea is scheduled to host Turkmenistan on March 26 at Cheonan Stadium, but the Asian Football Confederation (AFC) announced on Monday that it may reschedule the qualifier.

The AFC said in a media release on Monday, “At present, a growing number of national teams are unable to either stage matches or travel to venues, therefore, the AFC will meet FIFA and then the West Zone nations before making a final decision on the options that exist for the competition.”

The AFC will meet with FIFA and the West Zone member associations this week.

The AFC said it has been talking about the situation with the East Zone member associations and will announce the new schedule and fixtures after the meeting.

While the national team may get a new schedule for its qualifier, things aren’t looking good for the Korean table tennis team, which is unlikely to earn the ranking points it needs to avoid facing China in the early round at the 2020 Tokyo Olympics. Korea has to be ranked and seeded within the top four to do so. As of Tuesday, the men’s team is ranked fourth while the women’s team is ranked sixth.

The Korean table tennis team had hoped to earn some of those ranking points at the Qatar Open, but a 14-day quarantine measure implemented by the Qatari government means it will be unable to do so.

The Korean badminton team and judo teams are also in trouble as both were set to compete at international tournaments, expected to be held in Britain and in Russia, respectively. But quarantine measures implemented against Korean travelers mean it’s highly unlikely they will be able to take part. This comes as a serious blow to both the badminton and judo teams as they have Olympic spots and ranking points at stake.

Over in local leagues, the KBO finally held its executive committee meeting with the general managers of the 10 KBO clubs and officials on Tuesday. Since there are more than three weeks remaining until the start of the season, which is scheduled to start on Mar. 28, the officials and the general managers decided not to postpone the season, just yet. However, they said they will monitor the situation and meet up every week.

They came up with an idea of possibly postponing the season by a week, if the situation regarding the virus gets worse.

They are expected to have another meeting next Tuesday, and the final decision is expected to be announced on or before March 14.

However the number of games each team is scheduled to play in, 144, is unlikely to be reduced as long as the season is finalized by the end of November.

The KBO already announced the cancellation of all exhibition games, while four clubs - Kia Tigers, Lotte Giants, Samsung Lions and LG Twins - extended their spring training schedule as of Tuesday.

Currently, the Tigers are training in Fort Myers, Florida, while the Giants are in Adelaide, Australia. Both the Lions and the Twins are in Okinawa, Japan.