“Look at this!” a Japanese friend wrote as he sent me a photo of empty shelves in a supermarket. The local store had run out of toilet paper. “I went to several stores, but couldn’t find a single roll.” 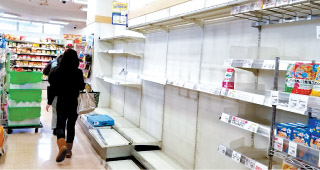 As a rumor circulated that the material for toilet paper is imported from China, households and companies bulked up on toilet paper.

On Saturday, Japanese Prime Minister Shinzo Abe held a press conference at an unusual hour — 6 p.m. — and was asked about the toilet paper crisis. Abe said that unlike face masks, toilet paper was produced almost entirely in Japan and was not in shortage, so customers should remain calm.

Despite Abe’s plea, people lined up at a foreign warehouse store over the weekend to stock up on toilet paper.

Panic buying didn’t stop there. The craze moved on to goods without expiration dates, such as diapers, plastic wraps, plastic bags and pasta. Now rice is selling out, which in Japan has surplus inventory every year. Japanese people didn’t stock up for natural disasters, but this time it’s different.

An elderly woman said it was the first time she had seen a run on toilet paper since the oil shock of 1973 as she left the supermarket. The panic buying at the time was based on incorrect information, and the trend is repeating itself after 47 years.

The Japanese government took the unusual action of closing elementary, middle and high schools around the country on Friday. More than 16 million students are affected. Moms’ chat rooms were in a panic. They complained that they don’t understand why schools in prefectures without confirmed patients should be closed. The government explained that the health of children was the priority, but I wonder why day cares and kindergartens are not closing. Families with working parents are in trouble. As schools are closed for nearly a month, parents would take turns and bring kids to work.

All passengers on the Diamond Princess have gotten off the ship, 28 days after it arrived at Yokohama. But the nightmare continues. Six people have already been diagnosed after testing negative when they disembarked. Initially, two monitoring checkups for the passengers were planned, but after the confirmed cases, they are getting check-up calls every day. A British passenger who was treated at a Japanese hospital died. Some local governments are complaining that they could not have any information about the passengers who disembarked.

The novel coronavirus, Covid-19, is testing governments’ capabilities to deal with it.

With the Olympic Games approaching, the Abe government is faltering before the unexpected disaster of virus outbreak.