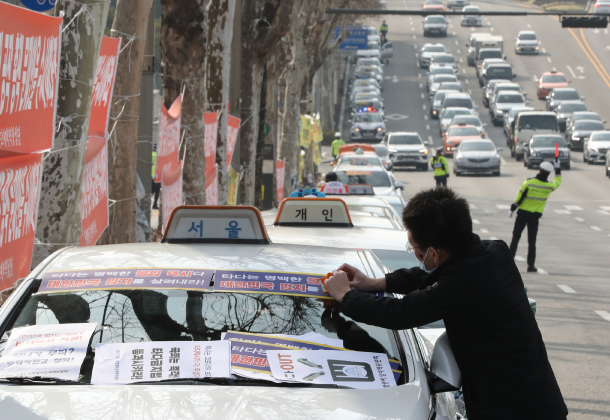 A taxi driver posts flyers demanding the government to push law revisions that would prohibit Tada from operating in front of a Seoul prosecutors’ office in southern Seoul on Tuesday. [YONHAP]

It’s still Tada against the world, with seven of its competitors ganging up in support of a legal revision that would essentially put the van-hailing service out of business.

This pile on comes just weeks after a landmark Supreme Court ruling in which Tada was determined to be legal business under the current law.

The revisions to the Passenger Transportation Service Act would prohibit the renting of vans with drivers for anything other than tourism purposes.

They were passed by the National Assembly’s transportation committee in December, but they stalled and were not voted on by the full session.

The revisions will be reviewed by the Legislation and Judiciary Committee today.

The plenary session scheduled for Wednesday is the last to be held by 20th National Assembly, which ends in May. If the revisions aren’t passed this week, they would expire and have to be reintroduced.

This would allow Tada to continue on as is.

The company has received considerable support from other start-ups and IT-related associations. They have criticized the government, lawmakers and the taxi industry for blocking the growth of young businesses with high potential.

In the other corner, support for the revision to the law is significant.

They argue that without the revision to the law, the business remains on a weak legal foundation. They want clarity so they can operate without worry. Because of the weakness of the existing law, they face legal risks, concern from investors and resistance from taxi operators.

Unlike Tada, the seven companies have acquired taxi licenses, which would be required if the revisions were passed.

“Mobility start-ups that have been thoroughly preparing to do business in line with new rules have not been able to advance,” a Tuesday statement said.

They noted that the revisions were developed with the input of a number of players and that they “didn’t satisfy every player but resulted in a meaningful compromise where they laid out the basic definition and direction for Korea’s mobility industry.”

“This proposal is not intended to stop a specific service; it’s to help all industry players go forward,” the statement said.

Their lobbying comes after a brutal 2018 and 2019 of conflict between app-based mobility companies and traditional taxis.

Convincing taxi associations to engage in discussions with Transport Ministry officials and IT mobility start-ups took months. In the process, a number of taxi drivers took their own lives in protest, and Kakao Mobility dropped the launch of a nearly-complete ride-sharing service.

In July, the Transport Ministry released a “grand compromise” plan which combined the interests of the taxi industry and IT mobility services. A lot of the plan’s suggestions were incorporated into the pending revisions.

Tada argues that the revisions are just “anti-innovation,” killing the spirit of innovation in the country.

“The Supreme Court has ruled Tada is a legitimate service,” Tada said in a statement Tuesday.

In an 11th-hour move, Socar CEO Lee promised that he would donate all of his personal gains from Tada. A well-known figure in Korea’s IT scene as the founder of Daum, Lee spent 11 years as an investor in social start-ups before he took the helm at Socar in 2018.

“As the major shareholder in Tada, I will return profits to society if Tada becomes a unicorn or goes through initial public offering,” he wrote in a Facebook post on Monday.