Oriental Brewery (OB), owned by Belgium-based AB InBev, maintained its dominance of Korean suds with nearly half the market share of beer sold in retail outlets, according to data released by Nielsen Korea marketing Friday.

Aided by the popularity of its Cass brand, OB secured 49.6 percent of the retail sales market. The market segment includes supermarkets and convenience stores but excludes bars and restaurants. 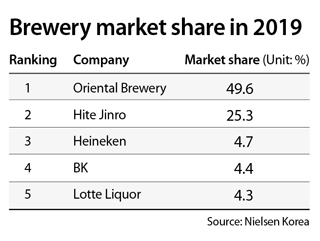 Hite Jinro, which brews Terra, held a 25.3 percent share in the market. Heineken trailed behind at 4.7 percent.

“The market conditions were tough last year, affected by a strong marketing drive by a competing company and a boycott of Japanese [beer] products,” a spokesperson at OB said, referring to rival Hite Jinro. “But Cass, which is produced in Korea, was able to cement its position as the market leader as consumers continued to turn towards the brand.”

Nielsen Korea explained that its data on retail outlet sales account for half of the country’s overall beer sales.

The firm said it believes those sales better represent consumer tastes, as restaurants tend to choose beer brands based on price competitiveness or marketing pushes by distribution companies.

Lotte Liquor took a significant hit during a nationwide citizen effort to boycott Japanese products, amid a deterioration of relations between the two countries last year.

Asahi had on its own boasted a market share of around 10 percent amid retail consumers, but sales plummeted following the unofficial boycott.

Cass registered 36 percent market share on its own, along with 1.19 trillion won in sales.

With the introduction of Terra, Hite Jinro’s old brand Hite disappeared from the list of top brands.

Following Terra was Tsingtao at 4.1 percent and Heineken at 3.7 percent.

The research firm did not have comparable data from the year of 2018.

Industry insiders say OB’s move to lower the price of Cass helped cement its place as the top beer in Korea.

OB announced a plan to cut down the factory price of Cass beers last year ahead of a revised alcohol tax that will go into effect next year.

The beer maker lowered the price of Cass by an average 4.7 percent in October.