Cautious performers take their shows online: The performing arts community is getting creative in face of virus

Cautious performers take their shows online: The performing arts community is getting creative in face of virus 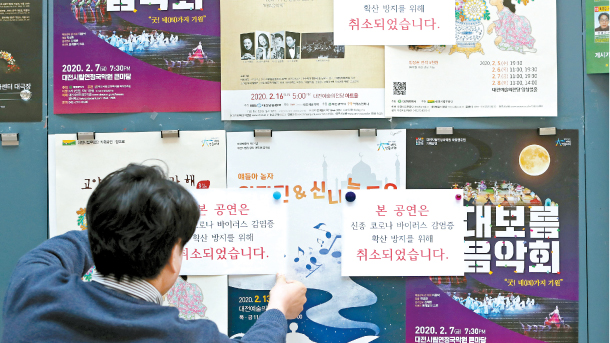 An official at the Daejeon Arts Center puts up a sign that says that all scheduled performances have been canceled to prevent the spread of the coronavirus. [YONHAP]

The coronavirus outbreak shows no sign of abating, prolonging the closures of cultural facilities and prompting even more cancellations of performances throughout the country.

Many organizations announced cancellations of scheduled shows for March on Monday. One of them was the Korean National Ballet (KNB), which decided to cancel two performances, “Swan Lake” and “Hoi Lang,” that were planned for the third and fourth weeks of March. The company said that it wanted to proceed with the performance as “putting on a show is a promise we have made with our audiences,” but eventually decided to cancel for the health and safety of the audience, dancers and staff members.

The Universal Ballet Company also announced Monday that it will cancel its “Sleeping Beauty” performance that was scheduled to take place for four days beginning on April 2, despite the “financial burden” it poses for the company.

The annual Tongyeong International Music Festival that was slated to kick off on March 27 is also highly likely to be canceled because it attracts people from across the country and around the globe. Festival organizers said they’ll announce their final decision within this week.

Although people can get full refunds for the tickets to canceled shows, it doesn’t take away the disappointments they feel from losing the opportunity to see the shows they’ve been eagerly waiting for.

Large-scale classical performances like ballets, operas and orchestra concerts aren’t easy to reschedule because it is not only difficult to set up their grand stages, but also to gather together all the artists whose schedules are already booked for the next couple of years.

Therefore, some artists, art centers and performance organizers have recently surprised audiences by pushing ahead with their performances, but staging them without anyone in the auditorium.

“Somewhere in between myth and reality - daegeum” at Seoul Donhwamun Traditional Theater in central Seoul was staged as planned on Feb. 29, although all of its tickets were refunded. The performance was streamed live via the theater’s official Facebook page and its YouTube channel. Daegeum, or traditional Korean flute, player Jeong So-hee decided to use her “unexpected time off” to present a free concert to “people who had to get ticket refunds or just anyone who needs some consolation in this troubled time.” 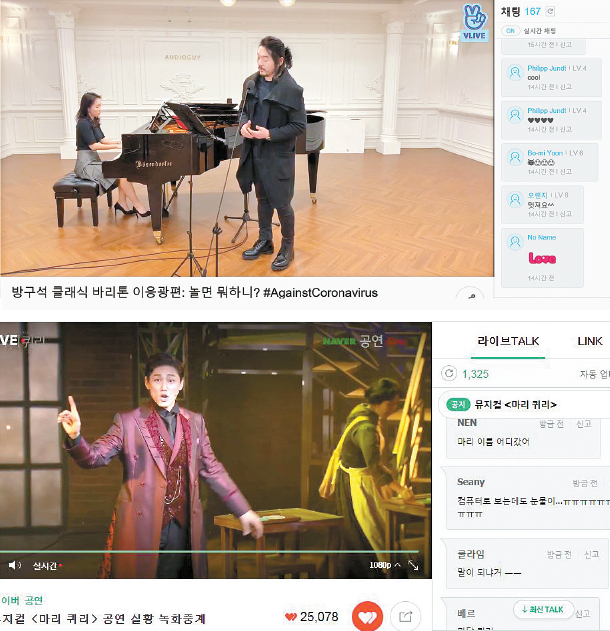 Top: Baritone Lee Eun-kwang live-streams himself singing in the hopes of providing consolation through music. Above: The musical “Marie Curie” was broadcast live on Monday evening for those who refunded their tickets. [SCREEN CAPTURE]

The Gyeonggi Provincial Theatre Company also announced Monday that it will livestream some of its upcoming performances this month. “Bravo, Mr. Um,” which was scheduled to be staged for four days, will be canceled, but the company said the play will be livestreamed on March 12 at 4 p.m. via its YouTube channel.

On the other hand, a Korean production of “Marie Curie” - a musical that traces the life of Madame Curie, the first woman in history to win the Noble Prize - is continuing on with its live run at the Chungmu Arts Center in central Seoul, and the Monday evening show was livestreamed for those who decided to refund their tickets.

More than a thousand people logged on to watch the musical on Monday evening, exchanging live comments as the show went on. A viewer with the ID Seany said, “Although [I’m not there], it’s bringing me to tears.”

The viewer, who said she’s a 28-year-old living in Yeouido, western Seoul, said she decided to cancel her appointment with a friend that evening to watch the musical because she had been to IFC Mall a few days earlier, a venue where a confirmed patient had visited.

“So I got my tickets refunded and stayed home. Then, I heard the news that the show will be streamed live,” she said. “I was so happy and grateful.”

For those coming to see the musical, producers Shon Company asks everyone to wear a mask.

Industry insiders say many artists are trying to follow suit, making attempts to use this time off to record solo performances and uploading them on social media in the hopes of providing consolation through music.

Baritone Lee Eung-kwang, whose schedule has suddenly cleared, has been holding mini concerts in front of his smartphone. According to Lee, all his scheduled concerts through March have been canceled, including a visit to Switzerland.

“I wanted to change the atmosphere through music,” Lee told JoongAng Ilbo, an affiliate of the Korea JoongAng Daily. “No concerts are being held at concert halls and people have no where to go but stay home. As a musician, I want to share my talent during such a time. Plus, I’ve already rehearsed so much for the concerts that were canceled, I might as well perform for the public.”

As Lee uploaded the video clips of his performances, he has tagged them with #againstcoronavirus, hoping that fellow musicians will follow suit.