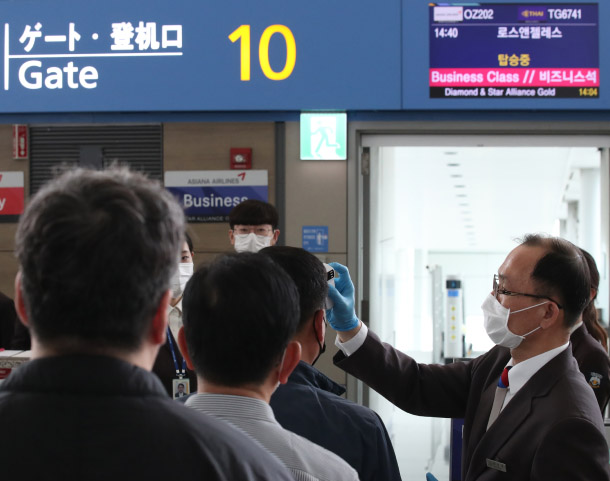 Pence said in a press briefing at the White House Monday evening, “I was pleased in the White House task force meeting today to learn that within the next 12 hours, there will be a 100 percent screening on all direct flights at all airports across Italy and across South Korea.”

The U.S. State Department over the weekend raised its travel advisory to Level 4, the highest in its four-tier system, urging Americans not to travel to Daegu in southeastern Korea, and Lombardy and Veneto in Italy, because of the coronavirus outbreak.

South Korea “about three hours ago fully implemented the screening on all direct flights at all airports,” elaborated Pence, who heads the White House coronavirus task force, and Italy would do so “within the next 12 hours or so.”

The screening protocol in both countries will include “multiple temperature checks in the airports for people before they are boarding,” he added.

Pence said that the U.S. State Department and interagency task force “has worked out that arrangement” with Korea and Italy and is “working very closely to assist them in implementing that.”

The U.S. State Department continues to maintain a Level 3 advisory for other parts of South Korea, urging Americans to “reconsider” a visit to the country, but has stopped short of an entry ban on people who have been in Korea, like the ones implemented on travelers from China and most recently Iran.

“The American people should know that we are saying that they should not travel to certain sections of Italy or South Korea,” said Pence. “Those advisories may expand, but we’ll allow the caseload in those countries to define that.”

Six people have died from the virus in the United States as of Monday, and there are 43 confirmed domestic cases, according to the U.S. Centers for Disease Control and Prevention (CDC).

However, extensive testing has yet to be conducted in the United States, and health experts think the number of infected Americans may be higher.

U.S. President Donald Trump has also indicated travelers from Korea and Italy would again be screened upon arrival at U.S. airports.

Seoul’s Ministry of Foreign Affairs confirmed the full implementation of temperature checks for outbound passengers from Korea flying to the United States.

Passengers with fevers over 37.5 degrees Celsius can expect not to be able to board the flight.

“The U.S. CDC has also shown interest in the Korean quarantine system and said they would like to observe it,” said a senior Korean Foreign Ministry official Tuesday, adding that the U.S. CDC and the Korea Centers for Disease Control and Prevention “are in close coordination with each other.”

Seoul has been briefing countries on the reason behind the spike in cases in Korea and efforts to contain it, and this official added that the U.S. officials have “highly regarded the transparency of our system.”

The new coronavirus, which was first reported in Wuhan, the capital of China’s Hubei Province, in December, has spread to over 60 countries with nearly 100,000 confirmed cases and over 3,100 deaths as of Tuesday. Over 80,100 confirmed cases are from mainland China.

South Korea has over 5,100 coronavirus cases as of Tuesday, accounting for the highest number of cases reported outside of China, but also has been recognized by experts for its high level of diagnostic capability, having tested over 120,000 people. Korea has traced most of its cases to the city of Daegu and the North Gyeongsang area, many linked to the Shincheonji religious sect.

Tedros Adhanom Ghebreyesus, the director general of the World Health Organization, said in a press conference in Geneva Monday that the risk of the coronavirus spreading was now very high at a global level, and outbreaks in South Korea, Italy, Iran and Japan were the “greatest concern.”

But he indicated that there was evidence that surveillance measures was working in South Korea, the worst affected country outside China.

“The cases in the Republic of Korea appear to be coming mostly from suspected cases from the five known clusters rather than the community,” said Ghebreyesus. “That’s important because it indicates that surveillance measures are working, and Korea’s epidemic can still be contained.”

He continued, “Knowing and understanding your epidemic is the first step to defeating it.”

Some 89 countries or territories have either some form of entry ban or strengthened quarantine measures implemented on South Korean travelers over the coronavirus outbreak as of Tuesday.

There are 37 countries or territories with an entry ban on people coming from Korea, or parts of the country most affected by the new coronavirus, according to Seoul’s Ministry of Foreign Affairs.

The Foreign Ministry has been ramping up diplomatic efforts in recent days to seek cooperation from countries to curtail travel restrictions and urge them against taking excessive measures.

Some efforts have paid off, with the Maldives limiting its entry ban to only travelers who have visited areas in Korea most affected by the virus - Daegu, Busan and the Gyeongsang region - rather than the entire country.

Likewise, the United Arab Emirates had also been considering travel restrictions, however, decided against them following a phone conversation between the two countries’ foreign ministers Monday, according to a Korean Foreign Ministry official.

But more and more Koreans are facing difficulties in their travels and businesses, with hundreds of travelers having their hands tied by unpredictable quarantine measures or flight bans by an increasing number of countries.

Over 1,200 Koreans are quarantined overseas, according to the Foreign Ministry Tuesday, with an estimated 960 reported in China and 270 in Vietnam. Both countries are key trading partners for Korea.

Vietnam banned the entry of foreigners who have visited the Daegu and North Gyeongsang area in the past 14 days and requires a self-quarantine for two weeks for those who come from other parts of Korea. Vietnam also suspended its visa-free program for Koreans as of Sunday.

Vietnam since Saturday has barred flights from Korea from landing in Hanoi and Ho Chi Minh City, and Koreans have been quarantined in military facilities and hospitals.

Some 13 Chinese provinces or cities have also implemented some form of quarantine measure for people coming from Korea, most of which are 14 days of isolation at home or a designated hotel.

There are also fewer cases of Koreans being quarantined in other countries including Russia, Kyrgyzstan and Qatar.

A senior Foreign Ministry official said to reporters Tuesday, “We are reviewing ways to send a response team to countries where many of our nationals are quarantined to inspect the situation and support them.”

However, Vietnamese authorities ordered that civilian aircraft departing from South Korea to Vietnam starting for Tuesday evening through June 4 will have to land at Van Don Phu Cat airports, said diplomatic sources.

Vietnam Airlines earlier said it will suspend its flights to and from Korea from Thursday until the coronavirus situation is controlled.

Likewise, Turkey, Italy and the Czech Republic are suspending flight services to and from South Korea. Countries like Mongolia and Israel already suspended flights last month, while Russia since Sunday has sharply reduced routes to Korea.