Owners of small businesses are lined up at the union’s office of Seomun Market in Daegu, Tuesday, to receive government subsidies granted to help ease the burden on ordinary people hit by a weakened economy from the coronavirus outbreak. [NEWS1]

Construction sites have fallen silent, restaurants are sitting empty and schools have postponed new semesters in Korea following the coronavirus outbreak - just a portion of mass furloughs that have left more than 7.5 million of the country’s contract workers and day laborers jobless.

Mrs. Kim, a 56-year-old cafeteria worker in Daegu, says she hasn’t received a penny in the past three months after her elementary school indefinitely postponed its first day of classes.

“As a mom with a child, I understand the school’s decision, but for me this is the only way to make ends meet,” she said with a sigh.

The damage was huge for temporary school staff, after the Ministry of Education on Tuesday ordered schools to push the start of spring semesters back to March 23, amounting to a two-week unpaid furlough for the school’s temporary workforce.

The delay in school openings poses an even bigger threat than the coronavirus for contract workers in schools, according to the labor union representing those workers. While full-time school employees are receiving the same salary, the situation is different for temporary staff who are paid by the day, including counselors, cafeteria workers and after-school instructors.

In response, union members have asked the government to pay them a shutdown allowance, citing Clause 46 in Korea’s Labor Standards Act, which requires employers to pay furloughed workers allowances of “not less than 70 percent of their average wages” during the shutdown. The law stipulates that the payments are required only when a business shuts down due to a cause attributable to the employer.

Officials from the union representing those workers, which is part of the Korean Confederation of Trade Unions, on Tuesday called on the government to help provide relief for its out-of-work members.

“The government needs to come up with detailed measures to preserve the wages of contract workers who have been surviving for months, unexpectedly, without payments due to the coronavirus outbreak,” the union said in a statement delivered to the National Assembly. 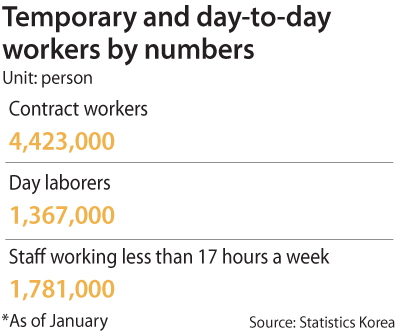 The government said it does not consider the coronavirus outbreak to be “a cause attributable to the employer” and has maintained its original stance to not give out any shutdown allowance to subjected individuals. However, Education Ministry officials on Tuesday held working-level talks to discuss other possible ways to provide relief to those workers.

“The livelihoods of temporary workers are at stake, since many have not been paid during the past months, including winter break. We’ve volunteered to disinfect school facilities and clean schools, but the Education Ministry stopped us from doing so. We have no other way to make a living now,” said Park Jeong-ho, the labor union’s policy chief. “The government should take responsibility and look after the livelihoods of people at risk when an unexpected crisis occurs.”

Workers in other industries are experiencing similar disruptions.

A 48-year-old chef said the restaurant he works in has sat empty as fears of contagion keep diners at home, and he’s been told to stay home until mid-March.

Individuals say sluggish consumption has prompted a chain of recession across multiple industries.

A 44-year-old chauffeur, Mr. Lee, says he used to provide service around the Yeouido neighborhood and Mapo District in western Seoul, but now he hardly gets any calls.

“It’s been like this for weeks. My colleagues either have no work or are staying home to avoid the risk of being infected by the virus. This is the most serious recession I’ve ever experienced,” he said.

And some construction workers claim they can’t even afford a cup of ramen, as many building projects were canceled after the outbreak began.

Seo In-beom works for an employment agency in Guro District in western Seoul. Before the coronavirus epidemic began sweeping through Korea, Seo said he would send an average of 15 to 20 people out to construction sites each day. For the last month, none of his employees have had any work, he said.

“The job market [for construction workers] stayed frozen since last May, but the coronavirus has put the final nail in the coffin” he said.

And in an industry in which most laborers are Chinese immigrants, xenophobia appears to be compounding the difficulties faced by construction workers.

Many construction site managers have been trying to avoid hiring Chinese laborers, out of fear they could cause the coronavirus to spread at work sites, according to an official from an employment agency in Daerim-dong, near Chinatown in western Seoul.

The official said he saw a massive drop in requests for construction workers on the early-morning shift.

Meanwhile, sinking fortunes for the travel and leisure industries are also taking a toll on part-time workers in that sector.

Officials at one major resort complex said they saw the biggest drop in customers they had ever seen. While the resort typically gets about 15,000 customers each day, the number of resort goers had plummeted to 900 people per day as of last week, just 6 percent of its pre-outbreak levels.

In turn, the resort has been forced to cut more than half of its part-time staff.

The Ministry of Employment and Labor announced Monday it’s considering providing special subsidies for companies in the tourism industry, which could be eligible to receive 90 percent of paid leave required to pay its employees.

Labor Minister Lee Jae-gap said the decision will be finalized by next week at the earliest.