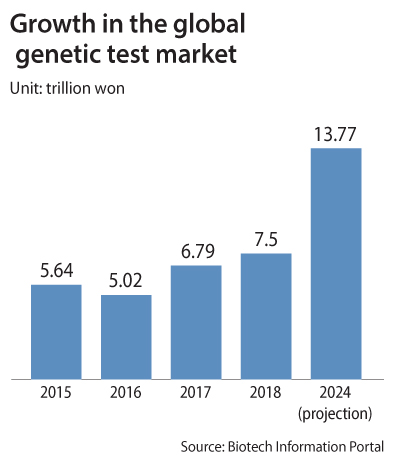 Korean medical companies are stepping up their offerings of genetic testing services after the government relaxed regulations on the industry in December.

The “direct-to-consumer” (DTC) test kits allow consumers to obtain their genetic profile of certain characteristics, including their likelihood of developing certain diseases, whether they will lose their hair with age or even where their ancestors originated. The DTC test kits can be ordered from home, allowing consumers to take a simple saliva swab and then send the kit back to the company to process the results.

Domestic companies offering gene analysis services include Macrogen, Theragen Etex, Eone Diagnomics Genome Center and LabGenomics. The companies acquired approval last year by the Ministry of Health and Welfare to offer the genetic analysis services. In December, the ministry expanded the scope of genetic traits for which the companies could test consumers’ DNA to 56. Genetic testing companies were previously limited to 12 traits for DTC kits, including blood pressure, blood glucose and hair loss.

Theragen Etex announced the release of its “GeneStyle Wellness 55+” kits on Tuesday. The service offers analysis for a range of additional traits, including how nutrients and vitamins interact with the test subject’s body, along with beauty-related information like the likelihood of developing freckles. The tests can also provide data on eating habits, sensitivity to spiciness or bitterness, potential dependency on alcohol or caffeine and the likelihood of developing sleep disorders.

The analysis will take maximum two weeks after customers send the used kits back to the company. The kits cost 290,000 won ($244).

“We plan to apply for more government projects this year to expand the scope of provided information,” said Theragen Etex CEO Hwang Tae-soon.

Eone Diagnomics is the only Korean company that also provides genetic analysis of family ancestors. It released “YouWho” last month, which analyzes 54 traits. The tests normally cost 219,000 won, but the company is currently offering them for 14,900 won. Beginning in April, the company plans to offer a wider range of information, including the ancestral roots of the customer’s mother and father.

Macrogen on Wednesday began selling a genetic analysis service for 29 traits via Naver.

Despite the recent advances in commercial offerings, the bio companies are still pushing for Korean regulators to open up the industry further, urging the government to more closely align its rules on DTC genetic testing with those in other countries advanced in the field like the United States.

“In Korea, minors are not allowed to take DTC gene tests. But genetic analysis that tells about your physical abilities could be far more helpful in deciding your career when you’re a minor,” said Lee Seung-kyou, vice president of the Korea Biotechnology Industry Organization. “There is a score of other traits that would come in handy for general health management as well.”

Lee added that in the United States, genetic analysis companies are allowed to provide information on subjects’ likelihood of getting cancer. But he said the 56 traits the Korean government allows companies to analyze are more focused on health management and personal features.

“We need to expand these subjects, not only for the sake of local companies, but also to help the public’s health management,” Lee said.