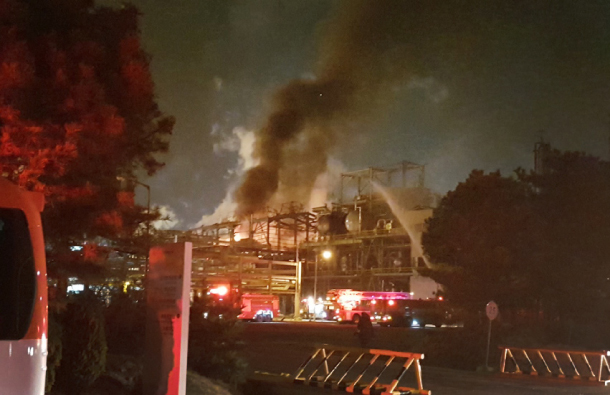 A photo taken by a passerby of firefighters battling a blaze caused by a gas explosion at a Lotte Chemical plant in South Chungcheong early Wednesday. [YONHAP]

A gas explosion early Wednesday at a Lotte Chemical plant left at least 41 people injured, two of whom remain in critical condition, the company said.

The explosion and subsequent fire took place at about 3 a.m., at the company’s naphtha cracking plant at the company’s Daesan complex in Seosan, South Chungcheong, prompting the shutdown of nine of its 13 factories.

Injuries, some minor, continued to be reported, and the total was expected to increase. Four Lotte workers were injured, including the two people in critical condition, the company said.

No hazardous chemicals leaked from the plant as a result, according to the company and the Seosan regional government. A worker at the complex has told fire authorities the fire originate at one of the pipes, but a conclusion was yet to be made as of Wednesday.

“We’re still in the process of searching for the source of the explosion with the police and the fire departments,” said a Lotte spokesman. “At the moment, our priorities are to determine what caused the incident and to take care of the injuries.”

The explosion occurred at the facility’s gas compressor house, the company said. The facility cracks naphtha at extremely high temperatures to produce base materials for petrochemical products like ethylene, propylene and butadiene.

The massive explosion was audible to residents in the neighboring city of Dangjin and caused walls and windows on nearby buildings to break, according to local media reports.

The company issued an official apology Wednesday afternoon, saying it will prioritize restoring the damage in the community. The company also established a task force consisting of Lotte’s top executives, it added.

The other eight factories were shut down because they are connected to the naphtha cracking plant via pipelines. They manufacture benzene, toluene, xylene, butadiene, ethylene glycol, polyethylene and polypropylene.

The remaining four factories in the complex remain in operation. According to the company’s regulatory filing on Wednesday, the entire Daesan complex was responsible for 21.8 percent of its revenue last year, equivalent to 3.3 trillion won ($2.8 billion). According to analyst reports, Lotte’s naphtha cracking center produces nearly half of the its domestic ethylene capacity.

Lotte said in a statement that details on the exact financial damages will be provided later on, its investigation. It did not say when the halted production lines will restart.

The Daesan complex has had accidents before, including an April 2018 fire in one of its pipelines and a benzene leak earlier that year in January.

“If the fire occurred in the pipelines, recovery may be possible in around a month. But if it was due to a structural problem in the compressor, it will take more than one or two months for the factories to start running again,” KB Securities analyst Baek Young-chan said.

Daniel Lee of Korea Investment & Securities added that recovering from explosions in such facilities can take six months or more, from purchasing the materials to actual installation.

However, analysts said the explosion’s effect on Lotte’s performance in the first half of 2020 will be limited as the market situation for downstream products of the naphtha cracking center weren’t good in the first place.

“The profitability of related products was estimated in the low single-digit percentages, so the impact won’t be substantial in the company’s first half performance,” said Hwang Yoo-sik of NH Investment & Securities. “But if the market recovers in the year’s second half, [the incident] may slow down the company’s overall sales improvement.”