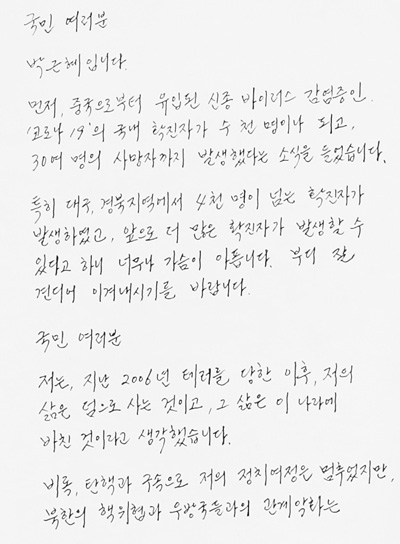 Park Geun-hye, the impeached former president of Korea, stepped back into politics Wednesday while in prison by sending a message calling for the country’s conservatives to unite ahead of the April 15 parliamentary elections.

In a handwritten letter made public by her lawyer, Yoo Young-ha, Park asked them to come together around the “existing giant opposition party.” Yoo read the letter aloud at a press briefing he held at the National Assembly.

Park was apparently referring to the main opposition United Future Party, headed by Hwang Kyo-ahn, who served as prime minister under her administration.

“The nation is in big trouble. Although there could be differences and gaps that are hard to fill, I appeal to you all, who held up Taegeukgi, to join forces as one, centered on the existing giant opposition party, for a better Republic of Korea,” she wrote.

Taegeukgi is the Korean word for Korea’s national flag.

It was a message to politicians and voters who are still loyal to her, as they are known for staging street rallies while waving the Korean national flag, which earned them the nickname, “Taegeukgi unit.”

“I will be with you united as one,” Park added, apparently seeking to help the opposition bloc form a united front against the liberal Moon Jae-in administration and the ruling Democratic Party in the upcoming poll widely viewed as a de-facto mid-term election for the president.

Park said her heart is breaking over the news that more than 4,000 residents in Daegu and nearby North Gyeongsang have been infected with the new coronavirus. The regions, located about a three-hour drive southeast of Seoul, are Park’s political home turf and a traditional stronghold of what’s now the main opposition party.

Park was sworn in as Korea’s president in 2013 and served until being impeached in 2017. She is serving a prison term of more than 20 years after being convicted of corruption.