The National Election Commission said Wednesday it has filed a criminal complaint against Oh Se-hoon, former mayor of Seoul and the conservative opposition party candidate for Gwangjin B District in Seoul, for election law violation.

The commission’s Gwangjin District office said it filed the criminal complaint against Oh to the Seoul Eastern District Office on Monday to launch an investigation. Oh is suspected of giving money to residents of his constituency for the Lunar New Year and Chuseok harvest holidays. 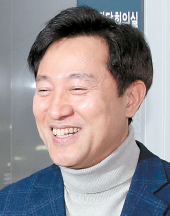 Oh, 59, is a lawyer, former lawmaker and former Seoul mayor. He is the United Future Party’s candidate for the Gwangjin B District to face the ruling Democratic Party’s Ko Min-jung, former spokeswoman of President Moon Jae-in. Oh is planning a political comeback with the April general elections after his resignation from the post of Seoul mayor in 2011. Although he was reelected as the mayor in 2010, he resigned in August 2011 after losing a referendum on the city’s free school lunch program.

According to the election watchdog, Oh paid a total of 1.2 million won ($1,000) to five workers at his apartment building as an expression of appreciation for their services. Oh paid up to 100,000 won to the security guards and janitors for Lunar New Year and Chuseok holidays, it said.

The election commission cited Article 113 of the Public Official Election Act as the grounds of its action, “A candidate, including a person intending to become a candidate, and their spouse shall not be allowed to make a contribution to those within the relevant constituency, institutions, organizations or facilities, or those having connections with the electorate even if they are outside of the relevant constituency, institutions, organizations or facilities,” it said.

A violation can be punished by up to five years in prison or a fine of up to 10 million won.

“We will crack down on major election crimes, such as making a contribution,” said the National Election Commission’s Gwangjin District office.

Oh issued a statement on his Facebook to refute the commission’s decision. “No matter how strict the election law is, I wonder if the incentives for holidays deserve punishment in Korea,” he wrote.

“I did not think paying incentives for annual holidays was against the social norms,” he wrote. “Furthermore, the workers’ salaries are paid by the management fees collected from the residents of the apartment, so I can justly give them bonus payments for holidays.”

“I went to the National Election Commission voluntarily and explained what had happened,” he wrote. “I even voluntarily explained the payments I gave them last year, but the commission used the information and increased the amount in the criminal complaint. I am stupefied.”

Oh added that he regrets not acting more prudently before an election.