The aggressive language of the statement was a startling contrast to the demure behavior shown in public by Kim Yo-jong at her brother’s summits, suggesting her status in the regime has been elevated as of late. 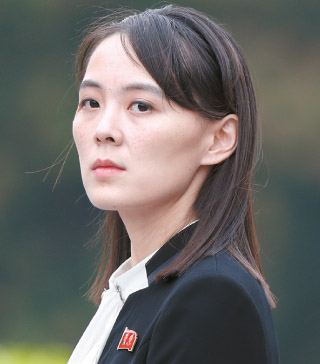 Kim was quoted in her position as first vice department director of the North’s ruling Workers’ Party Central Committee, which she assumed late last year.

Without naming South Korean President Moon Jae-in, Kim likened the Blue House’s actions to those of “a mere child” and a “frightened dog.”

Pyongyang launched two projectiles as a part of a “firepower strike drill” on Monday. South Korea’s military said the launches appeared to involve short-range ballistic missiles, and the Blue House convened a National Security Council meeting that produced a statement later that day urging the North to cease all actions raising tensions on the Korean Peninsula.

Accusing the South of being “fond of joint military exercises” and other “disgusting acts like purchasing ultra-modern military hardware,” Kim suggested the Blue House had no right to comment on Pyongyang’s drills, which were an “action for self-defense” that were “not aimed to threaten anybody.

“It is really the height of folly that those keen on war exercises poke their noses to the military exercises conducted by the other,” she was quoted as saying in an English-language report by the Korean Central News Agency. “Such a gangster-like assertion can never be expected from those with normal way of thinking.”

The “incoherent” assertions and actions by the Blue House only served to “magnify our distrust, hatred and scorn for the south side as a whole,” Kim added.

Kim also lashed out at Washington, claiming the South’s hypocrisy with regard to the drills mirrored the actions of the United States, “which is apt to making far-fetched assertions,” she said.

South Korea “had better be more brave and fair and square,” Kim said, “if it is set to get down to doing anything with us.”

While belligerent commentaries from North Korean officials are nothing new, Kim’s statement holds significance because of her quasi-royal status in North Korea’s dynastic political system.

Kim Yo-jong served as her brother’s aide in his summits with Moon and U.S. President Donald Trump and acted as the dictator’s surrogate on several occasions, like when she attended the opening ceremony of the Winter Olympics in South Korea in early 2018.

She also delivered a message of condolence on behalf of Kim Jong-un to the South via the demilitarized zone last June after the passing of the wife of former South Korean President Kim Dae-jung and again in October following the death of President Moon’s mother.

Her role as the dictator’s spokesperson on such occasions suggests this most recent statement is reflective of Kim Jong-un’s personal feelings toward Seoul amid a dead period in inter-Korean dialogue owing to the deadlock in denuclearization negotiations between Pyongyang and Washington.

Kim Yo-jong, however, appeared to step back from attacking Moon himself, noting in the statement that the South’s response is “so regretful and disappointing” but that “it is somewhat fortunate that it was not direct statement of the president.”

The Blue House will not issue a response to Kim’s statement, according to one presidential official.

Unification Ministry Spokesman Yoh Sang-key instead delivered the South Korean government’s official response in a briefing on Wednesday, saying it remained Seoul’s position that the South and North should “work together with mutual respect for one another.” The harsh words from Kim Yo-jong were, however, received enthusiastically by the main opposition United Future Party, which trumpeted the statement on Wednesday as proof that Pyongyang is scoffing at the Moon administration’s dovish approach to inter-Korean relations.