As the new coronavirus, dubbed Covid-19, keeps spreading, soldiers from the 56th Division of the Army disinfect a commercial district in Eunpyeong District in northern Seoul on Wednesday. [YONHAP] 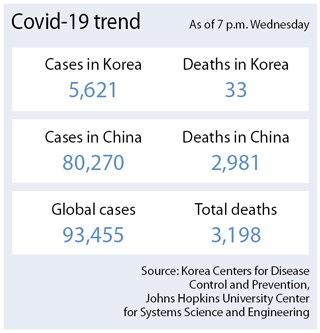 The number of people infected with the new coronavirus in Korea hit 5,621 by 4 p.m. Wednesday, up 435 from the day before - a marked reduction from the previous four days when government officials tracked down followers of the Shincheonji religion.

Based on statistics from the Korea Centers for Disease Control and Prevention (KCDC) released at 4 p.m. daily, the figure for new cases was 813 from last Friday to Saturday; 586 from Saturday to Sunday; 599 from Sunday to Monday; and 851 from Monday to Tuesday.

KCDC Director Jung Eun-kyeong said in a press briefing Wednesday afternoon that the number of new infections seem to be “overall decreasing” in Korea because many Shincheonji adherents have been tested, implying that their positive test results were swelling the daily counts of the past four days.

“We think this week is a very crucial moment to curb the upward trend of Covid-19,” said Kwon, referring to the virus’s official name. Kwon continued that his government office was entering “the final stages” of testing Shincheonji adherents in the area.

Most infections in Korea are still coming from Daegu and the surrounding province of North Gyeongsang, both located in the nation’s southeastern region.

The death toll stood at 33 by Wednesday 7 p.m., two more than the day before. Both were senior citizens in Daegu.

The 32nd patient to have died was a 78-year-old man who had underlying illnesses including high blood pressure, hyperlipidemia and a history of heart problems. The 33rd patient, however, was a 67-year-old woman who appeared not to have any underlying illnesses and died from “pneumonia caused by Covid-19,” health officials said.

Among Korea’s 5,621 coronavirus patients, at least 41 have been discharged from hospitals after full recoveries, and some 25 people were in critical condition.

In Seoul, 99 patients were counted by 10 a.m. on Wednesday, one more than from the previous day.

As officials in Daegu, Korea’s fourth-largest city with a population of 2.5 million, worried about a shortage of hospital beds and isolation facilities to treat coronavirus patients, local government offices, hospitals and private companies have offered space and medical services in their areas.

Now, some of Korea’s megachurches are opening their doors - but perhaps not to Shincheonji-linked patients. The churches said they were “discussing” the issue and would make a final decision after consultation with the government.

Mainstream Christian churches in Korea consider Shincheonji a cult and accuse its followers of infiltrating their congregations to carry out missionary work.

Out of 4,006 coronavirus patients counted in Daegu by the KCDC by Tuesday midnight, 3,168 or 79.1 percent are believed to be Shincheonji believers.

The Yoido Full Gospel Church, a Pentecostal church based in Yeouido, western Seoul, which has some 560,000 adherents, said it was willing to offer two buildings in its Youngsan Camp in Paju, Gyeonggi, for treatment of coronavirus patients with light symptoms. Sarang Community Church, a Presbyterian church based in Seocho District, southern Seoul, which has about 100,000 adherents, says it could offer a church building in Anseong, Gyeonggi, and another in Jecheon, North Chungcheong, for patients to be isolated.

Kwanglim Methodist Church in Gangnam District, southern Seoul, is offering one of its facilities in Pocheon, Gyeonggi.

Korean health officials believe those buildings can take in as many as 3,000 coronavirus patients, or possibly less depending on the space needed for each patient.

Daegu officials are in the process of testing 10,914 Shincheonji members and so-called trainees, and by Wednesday morning, 7,913 had been tested. Of that figure, 5,715 had received their results, and 3,168 (55.4 percent) tested positive.

Officials said Wednesday that the infection rate of Shincheonji adherents in Daegu was declining as more churchgoers are being tested because those who had reported symptoms of the virus were tested first.

Shincheonji doesn’t consider trainees as official members of the sect, yet they are being tested anyway.