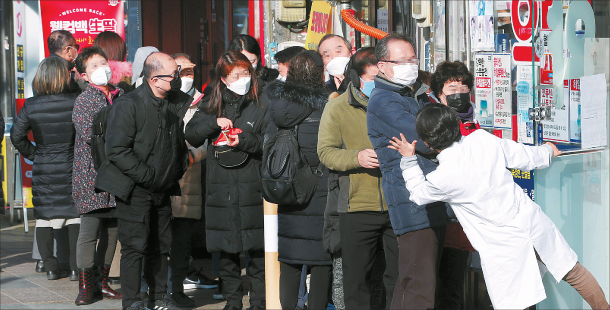 People line up to buy masks Thursday morning at a pharmacy in Jongno District, central Seoul. Starting Monday, people can purchase two masks per week on designated days of the week depending on the year of birth. [YONHAP]

The government will limit the number of masks individuals can buy to two per week, stop mask exports and allow mask production on weekends.

These are some of the long-awaited measures to bring masks back to store shelves as the public continues to worry about the spread of the coronavirus.

The government is even deploying the military in its campaign to stabilize mask supplies.

According to the government plan, individuals will only be permitted to purchase two government-supplied masks per week. Furthermore, they will only be allowed to make purchases on dates that correspond to their year of birth.

If the final numeral in a person’s year of birth is 1 or 6, purchases will be allowed on Mondays; people with birth years that end with 2 or 7 can buy on Tuesdays; 3 and 8 are reserved for Wednesdays; 4 and 9 for Thursday; and 5 and 0 for Fridays.

Purchases at pharmacies will be monitored through the Drug Utilization Review program or DUR, which is a system used to prevent patients from repeatedly purchasing the same drug.

But foreigners have to also show their national health insurance certificate when buying the mask along with their alien registration card.

The limits are meant to prevent people from hoarding masks by going from one store to another.

“As there’s a limit to increasing production [of masks] in a short period of time, supply will remain short of demand,” said Vice Finance Minister Kim Yong-beom during a press briefing on Thursday.

“The public’s understanding and cooperation are desperately needed so that masks can go to those who need them the most,” Kim added. “We ask that [the public] understand that limiting mask purchases to two per person per week is inevitable.”

Kim said the government will be fully managing the mask supply from production to distribution.

It has decided to designate 80 percent of the masks produced in Korea per day - or 8 million masks - as government procurements. This is up from the previous 50 percent, or 5 million.

Previously manufacturers were allowed to export up to 10 percent of production. That will be ended.

The goal is to raise daily production of masks from 10 million to around 14 million in a month by encouraging plants to run even on weekends.

In an effort to encourage mask makers to increase production, the government plans to pay an additional 100 won (9 cents) or more for each mask. That procurement price could be raised further for companies that run their factories late at night or on weekends.

Additionally the government will offer salary subsidies of 800,000 won per new employee to companies that hire new workers through the end of June.

The government will tap 2.8 billion won of its contingency reserves, used in times of emergency, to offer subsidies to companies that convert production lines that currently manufacture diapers and wet wipes to ones for melt blown filters, key components of protective masks, or upgrade outdated factory lines.

The government also decided to ban exports of melt blown filters through the end of June. Companies that have to export filters because pre-existing contracts will need the approval of the Ministry of Trade, Industry and Energy.

The government said it will also tap into other markets including the United States for melt blown filters after China recently banned its own export of the material.

The military will chip in. Five military bases will allow 100 trucks to be used to transport masks to the market.

“The government will do its best so that more masks can be manufactured swiftly and fairly provided [to the public],” Vice Finance Minister Kim said.