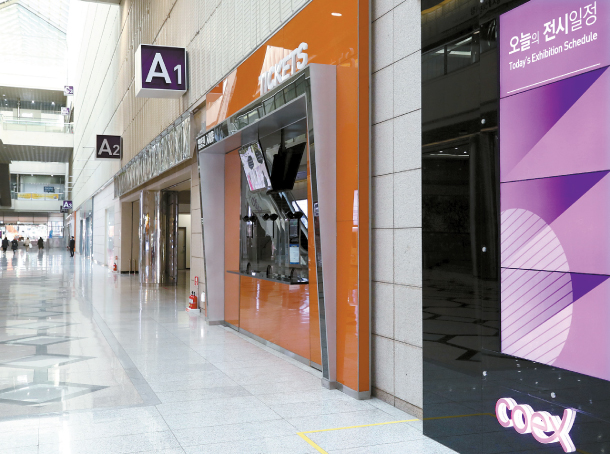 The hallway between exhibition halls is empty at Coex in Samseong-dong, southern Seoul, after a series of events in Korea were canceled or postponed due to the coronavirus outbreak. [YONHAP]

One by one, conferences, fairs, exhibitions and even weddings have been canceled across the country as companies and individuals avoid large gatherings that could further the spread of the coronavirus, causing massive losses for those forced to scrap plans months or years in the making.

Industry officials say losses have already piled up to hundreds of billions of won, while venue owners, organizers and international participants spar over who should absorb the costs and fees related to the steady stream of cancellations.

“This is the first time that events that had been organized were cancelled at the last minute,” said Lee Byeong-yoon, director of the Korea Exhibition Organizers Association. “If this series of cancellations continues on until May, we expect the damage to total around 110 billion won [$93 million].”

He added, “I don’t even want to talk about the estimated damage from exhibitors and booth manufacturers.”

Around 615 exhibitions take place each year in Korea, according to a statistics from the Korea Exhibition Organizers Association. There are 2,770 event organizers nationwide, employing 21,074 people. The companies generate an average of more than 4 billion won in annual operating profit each year, about double that of Korea’s movie industry. The events also result in an additional 3.6 billion won in sales.

Semicon Korea, the country’s biggest semiconductor convention, would have kicked off Thursday with nearly 500 international participants and about 2,200 booths throughout the exhibition halls provided by Coex. The event was cancelled in January, as the virus swept through China and prompted fears of a global pandemic.

The Coex center costs about 100 million won per day to rent, and the convention organizers estimate its losses will amount to around 700 million won. Beyond the three-day event, the exhibition would have also required additional days’ worth of rent for participants to set up and tear down their booths.

After the Korean government raised its alert system to the direst level last month, organizers of the Seoul Living Design Fair also cancelled their four-day event. Instead of kicking off the event next week, organizers will likely continue to squabble over responsibility for paying cancellation fees.

From brides-to-be to the organizers of sprawling events, many individuals are locked in disputes with venue owners over payments of cancellation fees caused by an epidemic beyond human control.

Fundamentally, many are questioning whether the coronavirus outbreak qualifies as a national disaster, in which many contracts call for waiving those charges. But that may not apply to large convention halls like Coex, which lacks clear cancellation rules.

The company says that neither it nor the exhibitors have a responsibility to pay another party if the cancellation results from a natural disaster - meaning the exhibitors automatically lose their down payments.

Lease contracts are usually signed up to two years before the event. Event organizers typically make a down payment to rent the space, and either pay installments or the remainder at some point before the convention starts.

Further complicating the debate is the question of who has the responsibility for cancelling the events. While the government bumped up the alert level and advised the public to avoid holding big events, the measure wasn’t compulsory.

Industry officials say the operators of massive venues like Coex likely have the upper hand in the negotiations, as exhibitors are hesitant to sue for compensation if it means their next event will be shunted off to less convenient or more out-of-the-way locations.

That would effectively pass the damage down to the organizers, along with the individual exhibitors and the companies that design and erect booths for trade shows. Regarding the latter group, there are about 300 different such construction firms just at Coex.

The cascading costs, from the venues down to individual participants and booth makers, are substantial. A 3 by 3 meter (9.8 by 9.8 foot) space for an exhibition booth rents for about 2.5 million to 3 million won per event. Participants pay those the rental fees in addition to the costs of creating their exhibition booths, and many contracts and agreements between the parties were signed well in advance.

In the case of international exhibitors, other local industries benefit from money spent on accommodations and delivering their products to Korea.

“Trade shows have always been a gateway to exports for small- and medium-sized businesses, but since that marketplace is now closed, Korea’s economy seems to be at stake,” an industry official said.