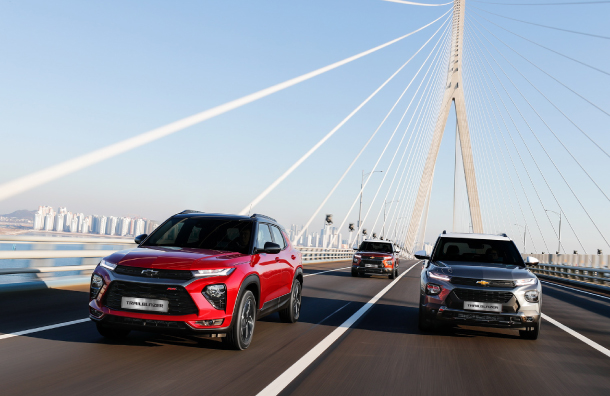 Chevrolet Trailblazers are driven down the road in Gyeonggi. The compact SUV from GM Korea, specially designed for the local market, is advertised as an entry-level vehicle option for young consumers in their 20s and 30s. It launched in January. [GM KOREA]

HANAM, Gyeonggi - Demand for cars fell considerably last year, a trend that shows no signs of slowing this year. But it’s a different story altogether for compact SUVs - at least here in Korea.

The vehicle type accounted for 10.7 percent of all car sales in Korea last year, or 184,274 units, up 18.9 percent from a year earlier. And that market has been largely dominated by a range of models from Hyundai Motor and Kia Motors, with the Seltos being the best seller.

But here comes a challenger: GM Korea, armed with the Chevrolet Trailblazer SUV, is looking to make a dent in the Hyundai Motor Group monopoly.

The Trailblazer certainly has the potential to disrupt the market. The gasoline-powered RS trim proved to be a five-tool player when I took it for a test drive last month. It’s a vehicle that might catch the eye of youngsters in their 20s and 30s looking for a cost-efficient option.

The compact SUV also seems well-suited for the Korean market, as it follows the latest trends for convenience and safety features.

But the car is certainly not Korea’s most spacious option for the segment. While that may not be a major problem for singles less likely to share a ride, families may want to reconsider before pulling out their credit cards.

The Trailblazer borrows heavily from the full-sized Blazer in its exterior design. The front shares a likeness with the Camaro sports car, with its flashy gigantic grille surrounded by strong lines.

Sharp headlamps extending to the sides embody masculinity, while gentle exterior lines over the top and forming the SUV’s overall shape balance the look out with hints of cuteness and gender neutrality. The Trailblazer doesn’t look too soft or strong for any type of consumer.

Its 18-inch alloy wheels also contain dynamic looks that immediately drew my attention. Tires usually don’t catch my eye, but these did, and I loved how they looked.

The interior also looks fancy, considering that the compact SUV is priced between 19.95 million won ($16,000) and 26.2 million won. The plastic cover across the dashboard and cockpit didn’t feel so luxurious to the touch but was reasonable given the price tag.

But the impression failed to continue when I initially stepped in for a ride. It seemed a little too packed, even after taking into account that I’ve gained a few pounds.

Stretching wasn’t really an option for me throughout the test drive, as my arms couldn’t move much beyond reaching for the D-cut steering wheel.

Leather seats with red stitching also made the compact SUV feel sporty. While I wasn’t into how the elephant skin-like fabric was placed to cover the lower end of the gear shift, everything else looked fine as it was.

GM Korea emphasized that the Trailblazer has enough load space for drivers to store their smartphones and wallets, but the company may have failed to plan on storing drivers themselves.

It certainly had more room in the far back. The trunk, with a maximum load of 460 liters, can carry up to three golf bags, probably more than needed for the Trailblazer’s target consumers.

But the back seats were even worse. My five-foot-tall colleague in the right back seat constantly complained that the ceiling was too low, and she had a hard time understanding why GM Korea made the seats that high.

Maybe the automaker could have just made the trunk a little smaller to open up some extra space for Trailblazer passengers.

The compact SUV is at its best when only the front-row seats are occupied, as the back seats can’t even be moved for extra recline or a better seating position.

Thankfully, the car wasn’t so cramped that I stayed frustrated. It was still spacious enough for me to get used to during the first hour and allowed me to experience the vehicle’s stable on-the-road performance.

With its 1.35-liter gasoline E-turbo engine and nine-level automatic transmission, the Trailblazer provided a smooth ride as we rolled down the highway. Acceleration wasn’t so delayed considering the price level, and the car remained reasonably quiet at high speeds.

The all-wheel drive system, when switched on, made the ride stable, and the suspension system allowed the car to go smoother over speed bumps than others within that price range.

The SUV also includes a sport driving mode, but I only put that to the test for less than 20 minutes, as there really wasn’t too much of a difference for me compared with the default mode, other than disturbing the radio with a flood of noise.

While it may not be that sporty, the Trailblazer also has high-tech safety features that young consumers with less driving experience look for in their options. Embedded systems helped me stay in lane and avoid collisions.

Navigating unfamiliar roads wasn’t so alarming when traveling with the Trailblazer’s well-made infotainment system, which responded to every vehicle movement in time and offered detailed directions for turns and exits. The car even boasts a head-up display to let drivers keep their eyes up front, a rather luxury feature seen in more expensive offerings.

I would even go as far as to say the infotainment system is superior to those seen in more expensive foreign vehicles, as it offers more hands-free access to smartphones while driving.

The Trailblazer offers Android Auto and Apple CarPlay via Bluetooth connection, which in most cases require connecting cables. It also offers wireless charging for smartphones.

It follows my understanding that Korean automakers are much better than their foreign counterparts in digital aspects.

The latest release from GM Korea certainly seems like a threat to Hyundai Motor and Kia Motors, which have been dominating the compact SUV segment in Korea.

It has everything needed to please young consumers and stays keen to what Koreans generally want from modern vehicle options.

But its prospective buyers may want to step onto the scale and measure their height before opening up their wallets for a new Trailblazer.

Kia to release high-performance version of electric EV6 on Oct. 4