The Justice Party on Thursday filed a criminal complaint to the prosecution to investigate former President Park Geun-hye for violating the election law by making public a letter to urge the conservatives to unite for the April general elections.

“She is the main culprit of the abuse of power scandal, who betrayed the people’s trust,” Chairwoman Sim Sang-jeung of the Justice Party said Thursday at the party meeting. “She should have spent time to atone, but she made a blatant attempt to influence the upcoming elections. This is a move to disrupt the country by instigating the resurrection of [her faction] and a grave insult to the people.” 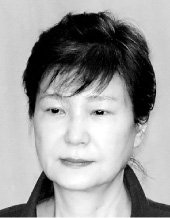 Sim also criticized the main opposition United Future Party (UFP) for welcoming Park’s letter. “Their competition to pledge loyalty [to Park] showed the public that the UFP is returning to the party of Park Geun-hye,” she said. “The UFP deserves the voters’ judgment if it chooses to reject any reform and go back to a Park loyalist group.”

Later in the afternoon, Justice Party officials submitted a criminal complaint against Park at the Seoul Central District Prosecutors’ Office, urging an investigation into her alleged election law violations.

Park, impeached and removed from office in March 2017, made public a letter from prison on Wednesday, urging the conservatives to unite ahead of the April 15 general elections. Yoo Yeong-ha, Park’s lawyer, held a press conference at the National Assembly on Wednesday and revealed the handwritten letter on behalf of the former president, who has been imprisoned since 2017, as she undergoes a trial on abuse of power and corruption charges.

In the letter, Park asked all conservative forces to unite with the “existing giant opposition party” at the center, apparently referring to the UFP. The main opposition party is currently headed by Hwang Kyo-ahn, who had served as justice minister and prime minister of the Park administration.

“The country is in a crisis. Although there are differences that are hard to narrow down, I appeal to you all, who held up Taegeukgi to unite as one, centered on the existing giant opposition party, to make the country better,” Park wrote. Taegeukgi refers to the national flag of Korea, and the conservatives still loyal to her have earned the nickname, “Taegeukgi troops” for waving the flags at street protests to support her and denounce the Moon Jae-in administration.

Conservative politicians who had voted to impeach Park also welcomed her message. “I send my appreciation,” said Rep. Kim Moo-sung. “We must uphold her wish and unite with the UFP at the center and win the April 15 general elections.”

Rep. Cho Won-jin of the Our Republican Party, a loyalist of Park, also welcomed her message. “We respect her wish and will try to arrange a merger between the rightist Taegeukgi forces and the UFP,” Cho said.

However, it remains to be seen if the Park loyalists will actually join the UFP. Cho demanded that the UFP stop the nomination process so that they can jointly field candidates, but Hwang rejected the request on Thursday.

The ruling Democratic Party (DP) fiercely condemned both Park and the UFP. “Her letter is proof that the UFP is still her party,” Rep. Je Youn-kyung, a spokeswoman of the DP’s election preparation committee, said Wednesday. “The people are still enraged by her abuse of power and corruption. Park sent a message as if she is a scapegoat, in an attempt to agitate the public from inside prison. She is denying the people’s decision to impeach her.”

While the DP fiercely condemned her actions, the ruling party saw an opportunity to unite its own supporters. “It is a larger loss than gain to the conservative opposition party,” said Rep. Woo Sang-ho, who was the floor leader of the DP when Park was impeached in 2017. “The conservatives are already united with an anti-Moon theme, so her message is not a crucial factor. But our supporters will further unite in repercussion, and some centrists who had supported impeachment will turn to join us.”

Another DP lawmaker also said Park’s letter will remind the voters about the presidential impeachment scandal.