The government launched an official investigation Thursday into the Shincheonji Church of Jesus, as suspicions grow that the controversial religious sect is not cooperating with public health authorities’ survey to find out how it emerged as the nexus in the new coronavirus outbreak.

The Central Disaster and Safety Countermeasures Headquarters (Cdsch) said Thursday that it has conducted an administrative investigation at the Shincheonji headquarters in Gwacheon, Gyeonggi. The probe began at 11 a.m., it said. 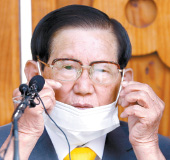 “Based on the judgment that we need to confirm accurate information for perfect quarantine and disinfection measures, we informed Shincheonji last night about our investigation,” Vice Minister of Health and Welfare Kim Gang-lip said during the Cdsch’s daily press briefing. Kim is the first coordinator of the Cdsch.

“Some regional governments are questioning the reliability of the follower lists that Shincheonji has offered,” said Kim. “We concluded that it is necessary to verify the data.”

Two special management team members of the Cdsch and two epidemiological survey specialists from the Korea Centers for Disease Control and Prevention (KCDC) were dispatched for the investigation. The Supreme Prosecutors’ Office also sent manpower for forensic analysis and technological supports.

The investigators will secure the lists of former Shincheonji followers and aspirant members and their personal information. Records of their church service participation and addresses of all Shincheonji facilities will also be seized.

While top politicians such as Justice Minister Choo Mi-ae and Gyeonggi Gov. Lee Jae-myung repeatedly demanded forcible raids of Shincheonji, health authorities had been reluctant to take such measures. “Because Shincheonji followers increasingly go into hiding when the government undertakes forcible measures, we see adverse effects against our efforts to stop the outbreak,” Kim said Monday.

Kim said Thursday that the Cdsch’s latest investigation is not a change of its stance. “Our only concern is accurately and promptly obtaining necessary information,” he said.

Kim admitted that the investigation was carried out after consulting with the Justice Ministry. “[Health and Welfare Minister Park Neung-hoo] consulted with the justice minister,” Kim said. “The two ministers had consultations on cooperation and information.”

While demands for raids have been made by top officials including Justice Minister Choo, the prosecution has been reluctant to conduct forcible searches and seizures at Shincheonji facilities. Last week, Choo ordered the prosecution to aggressively crack down on the Shincheonji followers if they are suspected of obstructing the public health authorities’ operations. She particularly urged prosecutors to actively conduct raids at the churches. The prosecution, however, did not act because of the health authorities’ discouragement.

At the National Assembly hearing on Wednesday, Choo continued to argue for the need of forcible investigations into the religious group. “For the sake of quarantine and disinfection, we need a forcible investigation right now,” Choo said. “The minister of health and welfare personally requested forcible measures.”

Daegu Mayor Kwon Young-jin also urged the prosecution to conduct raids, as the country’s infections are concentrated in his city. Daegu District Prosecutors’ Office, however, turned down the city police’s request to apply for a search and seizure warrant of the Shincheonji church in Daegu on Tuesday for the second time. The police’s first request, made Feb. 28, was also turned down at the time.

The Supreme Prosecutors’ Office said Thursday it is offering all necessary supports to the Cdsch. “We are offering technical support and forensic experts,” said the prosecution. “We will offer the best help for the Cdsch’s administration investigation, the most effective way to secure data at the current stage.”

According to the sources, the prosecution offered to send prosecutors and investigators, but the Cdsch refused the support. It reportedly said the number of prosecutors assigned to the prime minister’s office is enough to conduct the probe for now.

Meanwhile, Shincheonji made a massive donation to a charity on Thursday, sending 12 billion won ($10.1 million) to the Community Chest of Korea.

Earlier in the day, Shincheonji announced that it donated 12 billion won to the Community Chest of Korea for a campaign to fight the outbreak. “The money should be spent on relief activities in Daegu, North Gyeongsang and other parts of the country,” it said. Of the 12 billion won, the Daegu chapter of the church donated 10 billion won, while the central office of the church contributed 2 billion won.

Shincheonji Church of Jesus, the Temple of the Tabernacle of the Testimony, which is its formal name, was established by Lee Man-hee in 1994. The controversial doomsday sect has 12 branches nationwide and more in other countries, including China. Followers regard Lee as a physically immortal messiah figure.

Lee held a press conference on Monday and apologized that his church has become the nexus of the outbreak after one of its followers in Daegu was confirmed as a patient last month. “We will do our best to offer all human and material resources to the government,” he said at the time.