Teams fly to Vietnam to help Koreans in quarantine

Teams fly to Vietnam to help Koreans in quarantine

The government sent three teams to Vietnam Thursday to help hundreds of Koreans quarantined in the country over concerns about the new coronavirus.

A total of 12 officials departed for Vietnam from Incheon International Airport Thursday morning to assist over 270 Koreans quarantined in various cities in that country and enable those who want to return home to do so. The government has been bolstering efforts to aid Koreans who have been impacted by travel restrictions, as a total of 99 countries have slapped some form of entry ban or strengthened quarantined procedures on people coming from Korea. 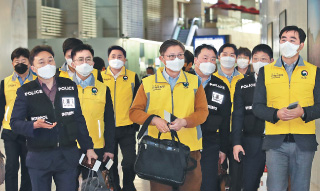 A rapid response team walks to a boarding gate in Incheon International Airport on Thursday en route to Vietnam to help hundreds of Koreans quarantined over Covid-19, or coronavirus, fears. [YONHAP]

There are four members in each so-called rapid response team sent to Vietnam, comprised of officials from the Korean Ministry of Foreign Affairs and the National Police Agency familiar with the region. They will be dispatched to Hanoi, Ho Chi Minh City and Da Nang.

Vietnamese authorities have put the Koreans in quarantine in designated military facilities, hospitals or hotels for 14 days, the incubation period of the virus.

Much confusion was caused last Saturday when Vietnamese authorities barred an Asiana Airlines flight from landing in Hanoi, giving it the option of landing at a remote and unfamiliar airport. The plane returned to Incheon, and Korea’s Foreign Ministry strongly protested.

Vietnam, a key trade partner to Korea, is putting all travelers who recently visited Korea into quarantine and has temporarily suspended its visa-waiver system. But it has stopped short of an entry ban. Initially, Vietnam banned the entry of travelers who had visited in the past two weeks the southeastern city of Daegu and North Gyeongsang, considered the epicenter of the coronavirus outbreak in Korea.

There are some 142 Koreans being quarantined in Hanoi, 112 in the Ho Chi Minh City area and 22 in Da Nang, according to the response teams.

Vietnam has banned flights from Korea from landing in its major cities since last weekend, so the rapid response teams had to fly into Hanoi via Bangkok. All members have tested negative for the coronavirus and have been exempted from the entry ban by Vietnamese authorities.

The rapid response teams are expected to stay in Vietnam for a week but can extend it.

Kyun Jong-ho, a Foreign Ministry official heading the rapid response teams, told reporters at the airport ahead of their departure for Hanoi, “We will do our utmost to help our nationals return to Korea or relieve any difficulties they may be facing.”

He added, “It is our priority to help those wishing to return to Korea to do so as soon as possible, and we will consult with the Vietnamese authorities to enable this together with our embassy and consulates.

The response teams will also make sure that the Koreans in quarantine have access to necessary supplies.

Korean Foreign Minister Kang Kyung-wha saw off the members of the rapid response teams and inspected the special entry procedures in place at Incheon airport.

Kang told reporters, “We have been continuously told that the friendship [of countries] or their intention to cooperate with Korea has not decreased but that they are inevitable measures in compliance with their countries’ quarantine systems.

“There were many confirmed cases following the concentration of testing in Daegu, but I believe the numbers will decrease in the future,” said Kang. “We look forward to various restriction measures being eased when the domestic situation calms.”

There are over 1,200 Koreans being quarantined overseas, mostly in China and Vietnam. Around 860 Koreans are currently quarantined in provinces and cities in China, and a senior Foreign Ministry official said they are being supported by consulates in the relevant regions.

Some 17 Chinese provinces and cities have some form of quarantine in place for people arriving from Korea, either at designated hotels or their homes.

As of Thursday evening, 35 countries or territories have entry bans on people coming out of Korea amid Seoul’s continued diplomatic efforts to curtail such restrictions. Six other countries, including the Philippines, have entry bans on people who have visited areas of Korea most affected by the virus in the past 14 days, such as the southeastern city of Daegu and North Gyeongsang.

The other countries and territories have strengthened travel restrictions such as implementing quarantine measures or medical checks for travelers coming out of Korea or parts of the country most affected by the virus.

Australia was the latest country to impose an entry ban on foreigners who have visited Korea in the past two weeks, set to be implemented from 9 p.m. Thursday local time. It already has entry bans in place on mainland China and Iran. Australians and permanent residents who visited Korea in the past 14 days will have to undergo 14 days of self-quarantine in their homes.

It will review whether to extend the ban in the next week.

Australia also raised its travel advisory for Daegu to the highest Level 4, warning its citizens “do not travel” to that area. For the rest of Korea, it raised the advisory to Level 3 in the four-tier system, urging its citizens to “reconsider your need to travel.”

Australia merely strengthened screening measures on travelers from Italy, another country affected by the virus. Australian Prime Minister Scott Morrison said that the ban was put on Korea because there were about five times as many arrivals compared to Italy.

Last year, some 249,000 Koreans visited Australia, a popular destination because of their working holiday program and for students, according to Seoul’s Foreign Ministry, while 187,000 Australians visited Korea.

Australian Ambassador to Seoul James Choi briefed Korean Foreign Ministry officials on the travel ban prior to its official announcement.

A senior Korean Foreign Ministry official said Thursday, “While we received prior notice [from Australia on the entry ban] we expressed our regret that there was not more information provided nor a chance for more consultation over the matter.”

The Japanese government on Thursday decided to expand quarantine measures on people coming from Korea and China.

Japanese Prime Minister Shinzo Abe after a meeting on coronavirus policy announced Thursday evening that those flying in from the two countries will be quarantined for two weeks at government-designated facilities. Previously, Japan had entry bans on people who had recently visited Daegu and Cheongdo County in North Gyeongsang.

The latest measures will kick off on Monday and run through the end of the month.

Japan has also surpassed 1,000 confirmed cases, including over 700 people infected on the Diamond Princess cruise ship that had been quarantined off the coast of Yokohama last month.