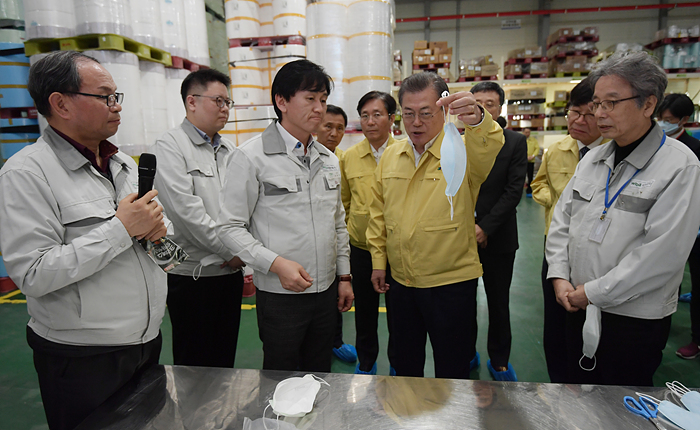 Amid snowballing public frustration over the impossibility of finding face masks to buy, President Moon Jae-in on Friday ordered the government to relax its brand new policy to limit weekly purchases to two masks per person.

According to Moon’s spokesman Kang Min-seok, Moon ordered the government to create a more flexible system.

On Thursday, the government announced a new program in which individuals are restricted to only two masks per week, and purchases are only allowed on one day of the week depending on a person’s year of birth.

According to the system, even children and the elderly are required to show up at pharmacies in person with identifications to buy their masks. The only exceptions were for people with disabilities.

The program is scheduled to start Monday and was quickly criticized.

“The system itself is already a restriction and inconvenience to the people,” Moon was quoted as saying by Kang.

“We must not create any additional inconveniences.”

“We need to discuss what age groups will be included in exceptions,” said a senior presidential aide.

“We will review this over the weekend.”

According to Kang, Moon also ordered the government to create smartphone applications that show available stocks at pharmacies.

Moon also visited a face mask manufacturer in Pyeongtaek, Gyeonggi, on Friday to encourage its workers.

The visit took place as another manufacturer decided to shut down production to protest the terms of a government supply contract.

eDent, a surgical and dental face mask producer, said Thursday it was stopping production because the Public Procurement Service was insisting on unreasonable terms.

“The Public Procurement Service said it will pay only 50 percent of the production cost,” it said.

“It also demanded a contract in which we promised to supply 10 times our daily production.”

The Ministry of Economy and Finance said Friday it would talk with the company to settle the issue.

The ministry also said it has signed contracts with 125 out of 131 mask manufacturers as of noon Friday to line up supplies for the new sales system.

It claimed it was offering reasonable prices to ensure that the producers won’t suffer losses.

“We will additionally increase the price for their weekend and nighttime production,” it said.

Meanwhile, a top Blue House official said Friday that healthy people must refrain from wearing face masks in order to allow those in need to use them.

Kim Sang-jo, policy chief of the Blue House, made the remarks during an interview with TBS radio.

Kim admitted that the shortage of face mask supply was triggered by a difficulty in securing raw materials such as filters produced in China.

He also blamed rumors and “fake news” for the shortage.