The club that manages to retain its foreign players will be the one that’s victorious.

As both the Korean Basketball League (KBL) and the Korean Volleyball Federation (KOVO) have announced suspensions to the remainder of their seasons, clubs are slowly seeing their foreign players head back home due to the coronavirus.

The trend began with KBL players. Last month, when the KBL announced that it will be joining the KOVO and the Women’s Korean Basketball League in trying to finish their seasons by playing the remaining matches at empty stadiums, the foreign players announced their leave.

The Busan KT Sonicboom faced the biggest fallout from this announcement as two of its foreign players — Allen Durham and Byron Mullens of the United States — decided to terminate their contracts and head back home. Then, the Goyang Orions’ Boris Savovic of Serbia also announced he would be leaving. These foreign players have proven themselves crucial to the clubs as the Sonicboom suffered two straight losses following their departures against the Seoul SK Knights and the Jeonju KCC Egis. 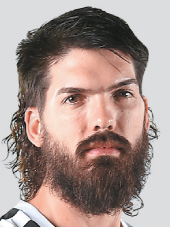 But after a guest staying at the same hotel as the Egis tested positive for the coronavirus, the KBL immediately announced on March 2 that it would pause the season and resume on March 29. Most foreign players are using this unexpected break during the season to take trips back home. Although they’ve promised the clubs that they’ll return, it remains to be seen what will transpire.

Due to the unexpected absences, the winner of the KBL’s 2019-20 regular season seems more likely to be the luck of the draw, as the team that manages to keep its players will be able to continue its season without any changes in its strategies.

Shortly after the KBL’s break, the KOVO, too, said it’s suspending its season as all 13 clubs requested the league to do so. Once the announcement was made, foreign volleyball players began an exodus.

On Wednesday, the Samsung Fire & Marine Insurance Bluefangs’ opposite hitter Andrea Santangelo of Italy agreed to void his contract and headed home.

That same day, it was reported that the Industrial Bank of Korea Altos’ outside hitter Adora Anae, who plays on the women’s league, also requested the club to cancel her contract so she could head back to the United States.

But basketball and volleyball aren’t the only local leagues concerned about their foreign players leaving. The K League, which was the first league to take action after the outbreak of the coronavirus, decided to postpone the start of the 2019 K League 1 season. Since the league still hasn’t announced the exact starting date, the clubs are concerned as to whether their players will cancel their contracts.

It’s been reported that KBO clubs, who are currently overseas for spring training, are facing similar worries.

While the local leagues are concerned about losing their players due to the suspension of the season, the Korean national football team also had its matches canceled due to the virus.

After FIFA and the Asian Football Confederation (AFC) held a meeting last week, FIFA announced it will postpone the upcoming matches in the second round of the Asian qualifiers for the FIFA World Cup 2022.

The Korean men’s football team was scheduled to host Turkmenistan on March 26 and head to Sri Lanka five days later.

FIFA made the announcement through its website saying, “For both FIFA and the AFC, the well-being and health of all individuals involved in football matches remains the highest priority, and as such, a formal proposal to postpone upcoming matches in the Asian FIFA World Cup 2022 and AFC Asian Cup 2023 qualifiers will now be shared with the relevant member associations.”
The new schedule has not yet been announced.