Lee Jung-hoo has one last point to prove

Lee Jung-hoo has one last point to prove 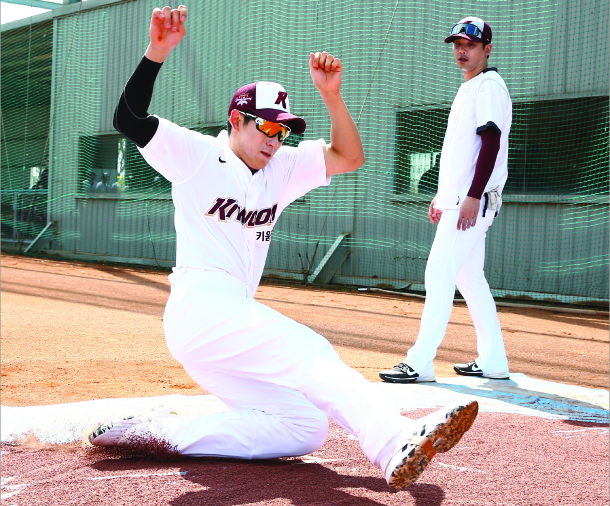 Lee Jung-hoo of the Kiwoom Heroes steals a base during the club’s spring training in Kaohsiung City in Taiwan. [KIWOOM HEROES]


After three seasons in the KBO, Lee Jung-hoo of the Kiwoom Heroes is no longer being compared to his father.

Even though he beat his dad Lee Jong-beom’s record in his rookie season, there’s still one area where he trails in comparison to his dad, base stealing.

Currently in Taiwan for the Heroes’ spring training, Lee Jung-hoo had been spending more time on improving his skills in order to beat his dad and says he plans to be more active in base stealing during the upcoming season.

Throughout Lee’s three seasons with the Heroes, he’s appeared in 393 regular season games and has only stolen 36 bases. His career best in a single season is 13, but he has bigger numbers in unsuccessful stolen bases, at 15. Though Lee made headlines every season for his number of hits and his batting average, when it comes to base stealing, he’s been forgotten.

“After I joined the pros, I’ve gotten passive once I’m out there [on bases],” Lee said. “Since I’ve had some injuries, I think I was being passive in terms of sliding. I think I have trauma from my injuries, but through training, I’ll figure out how to overcome the trauma.”

As he mentioned, Lee’s had some records of injuries, such as fracturing his finger in 2017 and a shoulder surgery in 2018.

Lee makes headlines for his batting skills in the KBO, as well as in Japan, Taiwan and other countries, but what made his father famous was his speed. The elder Lee played his KBO career for the Haitai Tigers, now the Kia Tigers, and in his rookie season, 1993, he stole 73 bases.

That season, the elder Lee managed to steal seven bases during the Korean Series games against the Samsung Lions and was named the MVP. But that was only the start. His base stealing got better the next season, where he stole a record-breaking 84 bases in a single season in 1994.

Throughout his 16 seasons with the Tigers, the elder Lee stole 510 bases, good enough to be ranked second in the KBO’s career stolen bases. Since he was famously known for base stealing, a lot of the baseball fans expected Lee Jung-hoo to have inherited his father’s speed and skill.

Back in 2017, Lee said he didn’t really time himself, but during his first year in high school, he ran 100 meters in between 12 to 13 seconds.
For athletes who play a sport that requires them to run, such record is not the fastest. KBO players who are known for their speed can run their 100 meters in about 10 to 11 seconds. When Lee Jong-beom played in the KBO, his time for 100 meters was at 11.5 seconds.

Lee Jung-hoo has made no secret of his desire for his dad’s abilities and has regularly said,” I’m jealous of my father’s speed.”

Despite knowing that Lee Jung-hoo doesn’t have his father’s speed, Lee Jong-beom still said, “I have the most affection toward my single season base stealing record, and I hope Jung-hoo can break that,” when he retired in May, 2012.

However, Lee Jung-hoo still shakes his head as he thinks it’s too difficult. But Lee Jong-beom believes that his son can make his dream come true one day as base stealing is not all about speed.

Behind successful base stealing, Lee Jong-beom pointed out “brain” and “physical strength.”

“Once I stole the second base, I ran straight to third, which was unexpected to the pitcher,” Lee Jong-beom said. “Normally after you steal a base, [pitchers don’t] expect you to steal another right after it. Players who steal a lot of bases get a lot of pick-off throws from the pitchers and regularly slide back to the first. One time, I had eight straight pick-up throws thrown at me. To move a lot you need to be physically strong.”

In terms of Lee Jung-hoo’s game management and knowledge in the sport, it is already well-known. Many have evaluated that Lee has outstanding knowledge in baseball which he proved by being able to make contact with any type of pitches thrown by pitchers. Lee only started his job in the outfield after he went pro, but within a year, he made significant improvement.

As he also showed flexibility with the team’s plans, Lee normally gets assigned as the Heroes’ table setter. Once he gets the right timing of the pitchers, then he is expected to easily increase in success rate in base stealing, which will also allow more scoring opportunities for the Heroes.

When Lee first joined the Heroes, his biggest concern was his physical strength. To get stronger, Lee thought that he needed to gain weight by gaining muscle through weight training. But he always found it difficult to gain weight. Among the rookie outfielders of his class, Lee was considered taller, at 1.85 meters (6 feet 1 inch) but weighed only 72 kilograms (159 pounds).

He forced himself to eat four meals a day over the past three years and now weighs 85 kilograms.