Hairstylist always tries to be ahead of the trends: Over twenty years, Noh Myung-hee has helped customers look their best, no matter the style

Hairstylist always tries to be ahead of the trends: Over twenty years, Noh Myung-hee has helped customers look their best, no matter the style 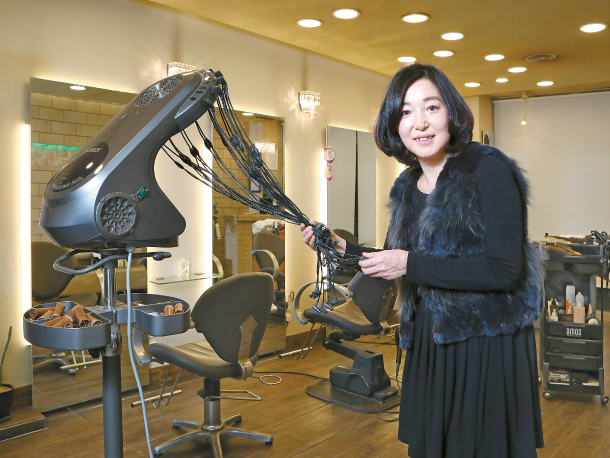 Noh Myung-hee, owner of a 20-year-old hair salon in Cheonho-dong, Gangdong District, in eastern Seoul, poses with a digital perm machine at her shop, Hair Story, on Tuesday. [PARK SANG-MOON]

TURNING 20
SECOND IN A SERIES

We’ve all had our coming-of-age moments growing up, unless you’ve managed to travel through time (in which case we’d love to interview you).

The Korea JoongAng Daily is turning 20 this year. We’ve had our own coming-of-age moments, but rather than boring you with stories about us, we decided to bring you stories of people, animals and organizations “Turning 20.”

There were days when women would summon magic in hair salons.

And most of the time, they got what they asked for.

“Around 2000, there was a new trendy style called the magic straight perm,” said Noh Myung-hee, who runs a hair salon in a residential pocket of Cheonho-dong in eastern Seoul. “You have no idea how many times I burned customers’ hair trying to get used to the new technique and hair products used for the magic perm.”

Noh has been running her shop for 20 years straight - without a break, or a holiday.

“It’s worked out for me because that was the way I built trust with my customers,” she said. “There are 18 hair salons in this part of town alone. If one is closed over the holidays, they know that my shop is always open.”

Being an owner of a hair salon for two decades means that Noh has witnessed not only changes of trends, but also the changes across generations of her customers.

“They range in age from a 3-year-old toddler to a woman in her 90s,” she said. “There is an interesting divide across generations about the styles they ask for. When a grandmother brings in her grandson, she asks for a style that would help the boy fit in with the rest of his friends. When his mother brings him in, she asks for something that will make him stand out from the crowd.”

Hairdressing is said to have been around since ancient times. Yet the feeling of empowerment a new hairstyle can give one never seems to grow old.

“It’s a statement that we can make,” Noh said. “It’s this choice, the ability to change something about ourselves that reassures us.”

To commemorate our 20th anniversary, the Korea JoongAng Daily sat down with Noh at her salon on Tuesday evening to hear her story of running a salon for 20 years while still sustaining a family, making friends with her customers and mastering emerging hairstyling techniques, all while staying true to the things she believed in when she began her career decades ago.

The following are edited excerpts from our conversation with Noh. 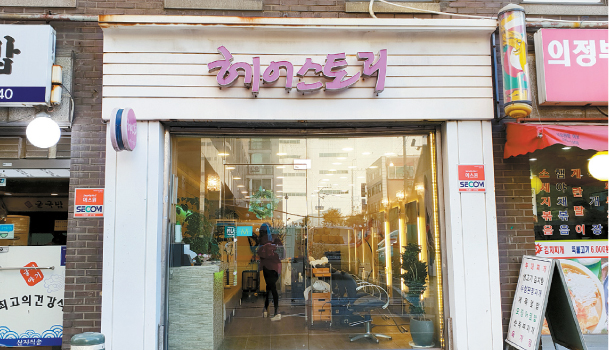 Hair Story, a hair salon that opened in 2000 in Cheoho-dong in Gangdong District, eastern Seoul, has kept its doors open rain or shine. [NOH MYUNG-HEE]

Q. How did you decided to become a hairstylist?

A. I was 24 and working in an office in Seoul. I knew I wanted to find myself a specific skill set that would cater to the needs of women. Because I thought that even when the economy gets bad, women wouldn’t stop spending money on matters related to beauty. I quit my job, attended a private academy in Gangnam [District, southern Seoul] and took a course on skin beauty but took a detour after I was mesmerized by an introductory course on hairstyling.

The course of becoming an owner of a hair salon is said to be quite a rough one in Korea.

There is really no set way to become a successful hairstylist. When you join a hair salon as a beginner, they will make you mop the floor and do menial work. But this is no time to complain. You have to watch what the lead designer is doing, how he or she deals with the customers, what kinds of products lead to what kinds of results and so on. It took me forever to pass my boss’s test on shampooing. Try washing someone else’s hair at home. It’s not going to be easy.

Tell us about some of the hairstyles that have been trendy over the past 20 years.

The most notable change was the magic straight perm that emerged in 2000. It was a whole new era for the perm in general because before then, we would rely on rollers and chemicals to bring out the curls, but the new technology meant we can rely on the heating process to be more creative and make different perm styles and more permanent ones.

In Korea, hairstyle fads follow the hairstyles of popular TV personalities and actors of the time. So instead of recalling the hairstyle names, I remember mothers asking for actor Goh Doo-shim’s hair, young women coming in with photos from Korean dramas showing layered perms and men asking for what’s called a pin curl perm decades ago, which is back in style these days.

How do you maintain a shop among a dozen others offering the same service in the area?

Trust is key. Can the customers trust me to be open when all other shops are closed? Can the customers trust me to use good hair products? Can customers trust me with their hair? And trust is built based on relationships. Over the past 20 years of running the salon, I don’t think I ever worried about losing customers. If I had time to worry, I would focus more on giving the best to the current customer in my shop. Another key is to listen. When my customers sit down at the chair and let me handle their hair, they’re not only trusting me to be a good hairdresser but a good listener. Somehow, something about yourself that you cannot bring yourself to tell your own family members flows out naturally in a conversation at a hair salon.

Who are some of your frequent customers?

I have families who bring their children, who then grow up and bring their children to the shop. There is this one family, who now live in China. The first thing they do when they land in Korea during the children’s school breaks is to call up the salon and make an appointment. It’s a family of a grandmother, her daughter and the daughter’s young children.

It’s remarkable to see people age and bring in their own child who looks exactly the same as they did when they first came into the shop years ago. I know a woman, who used to ask me the secrets to dyeing her hair different colors when she was in middle school. She has a small child now, and they come in together. When I saw her child, it was like I had taken a time machine.

Do you think hairdressing as an occupation will survive a time of rapid development of technology?

Absolutely. You’d think that if two people ordered a same style of hair, it would turn out the same way on both people. But no two people are alike in their hair’s thickness and curliness and their facial shapes and contours. A hairstylist takes all of that into consideration. That’s not something a machine can do.