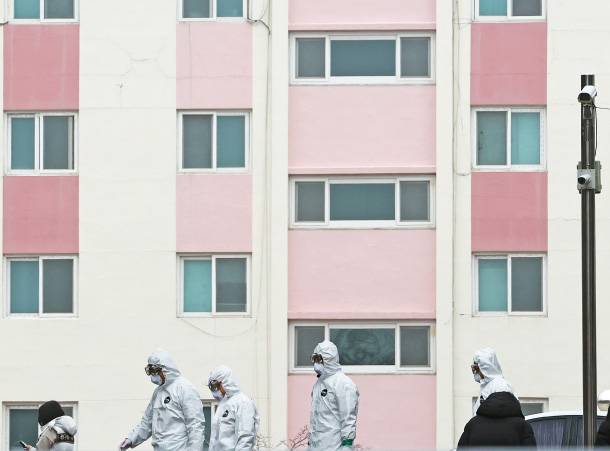 Quarantine officials in full protective gear on Sunday prepare for transporting coronavirus patients from Hanmaeum Apartment in Daegu to treatment facilities. The apartment complex has been under cohort quarantine as 46 out of 142 tenants were confirmed infected with Covid-19. All 46 patients are Shincheonji adherents and 94 out of 142 tenants are Shincheonji followers. [NEWS1]

That brought total cases of coronavirus infections in Korea to 7,313 by 4 p.m. Sunday, according to statistics from the Korea Centers for Disease Control and Prevention (KCDC).

The daily infection count has been lower than those of last weekend and early last week, when local government officials extensively tracked down followers of the Shincheonji religion, whose church building in Daegu was the epicenter of the outbreak.

Nearly three quarters of the country’s infections are in Daegu, Korea’s fourth-largest city with a population of about 2.5 million, while 15 percent are from the surrounding province of North Gyeongsang, both of which are in the southeastern region.

Based on statistics from the KCDC released at 4 p.m. daily, there were 505 new cases from last Thursday to Friday; 448 from Friday to Saturday; and 272 from Saturday to Sunday. When combining the last two figures, that means 720 cases were reported over the past weekend.

The death toll stood at 50 by Sunday at 8 p.m., eight more than the same time on Thursday. The latest deaths were mostly senior citizens in Daegu or North Gyeongsang, and many had underlying illnesses.

A 78-year-old woman who was the 50th coronavirus fatality in Korea was hospitalized at a nursing home for the elderly in Bonghwa County, North Gyeongsang, before she was transferred to a different hospital after testing positive for the virus last week. At least 53 infections have been traced to the nursing home in Bonghwa County, 51 of whom are either patients or workers there.

It was the first time that a coronavirus patient from the facility died.

In Seoul - the most populous city in Korea with nearly 9.7 million residents, or 18.8 percent of Korea’s total population - the number of coronavirus patients reached 120 by 10 a.m. Sunday, less than 2 percent of nationwide infections. At least 11 cases were reported in both Jongno District, central Seoul, and Gangnam District, southern Seoul, while 12 cases were reported in Songpa District, southern Seoul.

The KCDC said Sunday afternoon that some 36 patients were in critical condition. At least 130 people have been fully cured from the virus.

In Daegu, the Hanmaeum Apartment complex was placed under a so-called cohort isolation Saturday after 46 residents, all of whom were Shincheonji adherents, were confirmed to have contracted the disease. 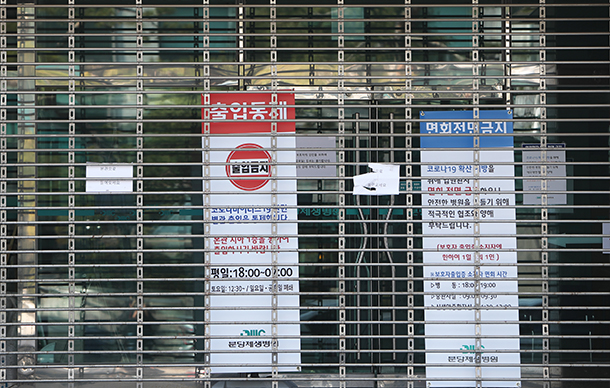 The Bundang Jesaeng General Hospital in Gyeonggi was shut down on Sunday as 13 people were confirmed infected with Covid-19 from Friday to Sunday. [YONHAP]

Cohort isolation refers to the lockdown of an entire medical institution or building to prevent the spread of a contagious disease. During this outbreak, the measure had usually been used for hospitals or nursing homes with mass infections.

Saturday’s case represented the first time that an apartment complex was shut down. Daegu officials said Sunday that almost all infected patients at the apartment complex had been transferred to a hospital or government-run isolation facility, and that no coronavirus patient was left behind in the complex.

Daegu Mayor Kwon Young-jin said Sunday in a press briefing that among the apartment’s 142 residents, 94 were Shincheonji adherents, and that those who were under lockdown are also being tested for the virus. All residents were told Saturday they wouldn’t be allowed to leave the compound until at least March 15.

As to why so many Shincheonji worshippers lived there, Kwon said Sunday that his city office believes some Shincheonji tenants naturally recommended the apartment to other adherents, forming a small community there.

On another front, officials in Yongin, Gyeonggi, and Korean Air announced Saturday that a 36-year-old flight attendant who returned from a flight to and from Los Angeles tested positive for the coronavirus, the second time that a cabin crew member from Korean Air contracted the disease.

Officials said the second crew member was on the same Los Angeles flight as the airline’s first, a 24-year-old flight attendant living in Songpa District, southern Seoul, who tested positive on Feb. 24.

The second patient was among some 30 cabin crew members who were told to self-quarantine in their homes for two weeks after the first patient tested positive. The airline said the second patient hadn’t been on any flights since then.

According to explanations from Yongin and Korean Air officials, both flight attendants worked on the KE017 flight from Incheon International Airport to Los Angeles on Feb. 19 and on KE012 from Los Angeles to Incheon on Feb. 20.

On the second flight from Los Angeles to Incheon, the first flight attendant started to cough. Upon her landing in Korea, she was isolated in her home until she tested positive for the coronavirus on Feb. 24.

While some 30 cabin crew members on the same flight were told to isolate themselves in their homes, only the 36-year-old turned out positive so far, but Korean Air said it would extend the others’ isolation period by another week.

Health officials still don’t know how the flight attendants contracted the disease, but the first was on the KE958 Korean Air flight that departed Tel Aviv on Feb. 15 and landed at Incheon International Airport the following day, which is the same flight boarded by a group of Korean Catholics from North Gyeongsang who tested positive after returning from the pilgrimage.

How the Catholic group contracted the disease is also unclear.

Daegu medical officials said Sunday that one among Korea’s seven pregnant coronavirus patients recently gave birth in Daegu, and that the mother and baby were fine. The infant tested negative for the coronavirus, authorities said, adding that the virus doesn’t appear to be vertically transmittable yet.

In Seongnam, Gyeonggi, the emergency room and outpatient facilities of Bundang Jesaeng General Hospital were shut down last Friday after medical staff and patients tested positive for the coronavirus. By Sunday morning, at least 13 infections have been traced to the hospital, including in six patients, two nurses, four nursing assistants and a hospitalized patient’s family member.

The hospital said it suspects that the infections started when a 77-year-old cancer patient was admitted to the hospital through an emergency room on March 1. She later displayed symptoms of pneumonia and tested positive for the coronavirus on Thursday.

At the Ministry of Health and Welfare inside the Sejong Government Complex near Cheongju, North Chungcheong, at least 27 officials were told to self-quarantine in their homes after a ministry official in her 20s tested positive for the coronavirus last Saturday. All 51 employees in her bureau were tested, but they all were negative, the ministry said.

The 20-something employee was said to have learned Zumba at a fitness center in the city last month, whose 41-year-old instructor tested positive for the virus last Friday.

The Zumba instructor had participated in a Zumba workshop in Cheonan, South Chungcheong, on Feb. 15, where 29 instructors, including three from Daegu, trained for about three hours from 11 a.m. Several people who attended the session later came down with symptoms of the virus and tested positive.

Meanwhile, weekend demonstrations in Gwanghwamun Square, central Seoul, hosted by anti-Moon Jae-in organizations calling for the impeachment of the president, weren’t held last weekend, and the coalition of organizers said they wouldn’t hold one in the upcoming weekend as well.

Late last month, the Seoul Metropolitan Government announced a temporary ban on all political rallies in Gwanghwamun Square, Cheonggye Plaza, Seoul Plaza and near Seoul Station and the Blue House, all in downtown Seoul. Seoul police warned “stern countermeasures” for any violators. But the prohibition was ignored on Feb. 22.