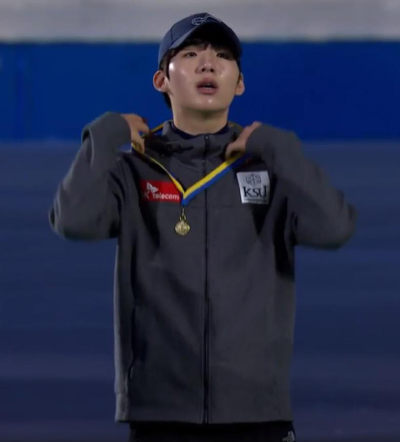 By clocking 7 minutes and 47.060 seconds, Chung earned the final 60 points to win his first gold medal at a senior international event. Throughout the majority of the mass start race, where skaters race 16 laps of the 400-meter track at the same time, Chung stayed in the middle of the group. With just three laps remaining, he kicked it into gear.

Chung sprinted across the finish line just 0.06 seconds ahead of Bart Swings of Belgium.

The mass start race is different from usual speed skating races, where only two skaters race in each heat and determine the winner based on their time. It is a lot more similar to a short track race, where all the skaters race the 16 laps at the same time. Due to this, speed skaters who have experience in short track tend to have an advantage.

Chung first made headlines back at the 2018 PyeongChang Winter Olympics when Team Korea won silver in the men’s team pursuit race. Although it was a team event, by winning silver, Chung became the youngest Korean speed skater to win a medal at the Olympics at just 16 years old.

He once again made headlines when Lee Seung-hoon won gold in the men’s mass start race. Although Chung didn’t win a medal, he stole the show by setting the pace for Lee for most of the mass start race and then falling back to allow the veteran skater to take the gold. Although Chung finished eighth in the race at the Games, the sportsmanship he displayed was well-received by the home crowd, who recognized the role he played in helping Lee win gold.

Following the PyeongChang Olympics, Chung became a new hopeful in long-distance speed skating in Korea, after Lee Seung-hoon. Right after the Games, Chung picked up a gold in the 5,000-meter race at the World Junior Championships.

However, once he started competing on the senior stage, it took some time for him to make his way up to the podium. He did manage to win a bronze medal in men’s mass start at one of the world cup series, but as winter sports are less popular in Korea, his name slowly began to fade from the public eye.

But this season, he proved his potential. Prior to his grand finish at the top of the podium in the mass start race, Chung picked up a silver in men’s mass start at the second leg of the World Cup in Minsk and at the Four Continents Championships.