Government is manic on masks as long queues remain

Government is manic on masks as long queues remain 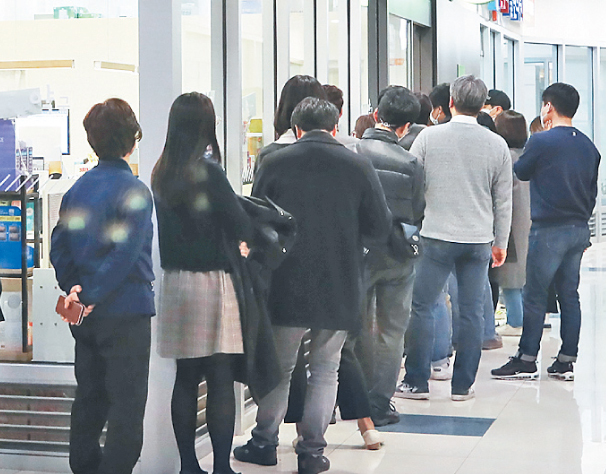 People wait in line to purchase masks offered by the government at a pharmacy in Seoul on Monday. [YONHAP]

The mask market was further thrown into confusion as the government simultaneously announced a dramatic crackdown on the hoarding of the product and also said that masks are all but unnecessary.

Prime Minister Chung Sye-kyun said on Sunday that people should no longer wear masks, unless they are ill or vulnerable, or should switch to fabric masks. He said he would set an example by wearing a fabric mask himself.

The comments seem to indicate a reversal of policy, as the government had been encouraging the wearing of protective masks.

A new mask policy was implemented by the Blue House on Friday, and the guideline was based on advice from the Ministry of Food and Drug Safety.

Blue House deputy spokesman Yoon Jae-kwan said Monday wearing masks will be “unnecessary” for Blue House employees commuting by private vehicles and those using the Yeonpungmun building. Face masks are also not necessary when moving between buildings inside the compound, while working or attending meetings, he said.

The deputy spokesman said those speaking during a meeting or commuting on public transportation will be advised to put on their masks. Masks recommended by the Blue House are fabric masks. Yoon said the protective masks with filters will be recommended only when it is necessary.

Previously anyone stepping onto Blue House grounds was required to wear a face mask.

Mask purchases exceeding 3,000 units have to be reported to the authorities. When more than 10,000 are ordered, the government has to approve the transaction.

Hoarders will be prosecuted, unless they report their stock and sell all the masks to the government.

Since last week, the government has been taking 80 percent of the 10 million masks manufactured in Korea daily. That is up from 50 percent previously.

Despite the official buying of 8 million masks a day, the supply is not meeting demand, with long lines forming at pharmacies to buy what face masks are available.

“As the masks distributed in the market have shrunk to 20 percent, fierce competition in trying to get a hold of masks in the private sector has been inevitable,” Vice Finance Minister Kim Yong-beom said during a press briefing on Monday. He said he was concerned that companies and the local government would monopolize the purchase of the few masks that are available in the market, leaving none for the average person.

Under an amnesty, those reporting stockpiles of masks held for profiteering by March 14 will not be punished if they disclose their hidden inventory.

The vice finance minister said the government will purchase the masks at the appropriate price and not file documentation on the transaction to the National Tax Service. The identity of the repentant hoarders will not be disclosed.

Kim said that the measure was announced to signal leniency for those who come forward and telegraph “plans of an aggressive action with no mercy against those who are found after the window of voluntary reporting closes.”

The vice finance minister said the government is also looking into compensating those who report such illegal acts.

“As much as penalizing those who committed illegal acts, right now we are at an important point where we need to secure even a single mask,” Kim said.

The government also disclosed details on the pricing of the publicly distributed masks as well as on the distribution networks.

According to the government, the Public Procurement Service purchases the masks from manufacturers for 900 to 1,000 won each. Wholesalers Geo-Young and Baekje Pharmaceutical then sell the masks to pharmacies at 1,100 won, which are retailed at 1,500 won per mask.

Since the government announced its mask distribution measures, the number of pharmacies receiving masks has totaled around 17,000 from a consortium led by Geo-Young.

The government emphasized that Geo-Young isn’t the sole supplier. It is part of a consortium of more than 10 wholesale drug distributors.

“When the government selected the official distributor, we considered public interest and availability,” said Food and Drug Safety Minister Lee Eui-kyung. “The Geo-Young consortium and Baekje Pharmaceutical were selected as they have nationwide distribution networks and expertise in drug distribution.”

The frequent changing of advice on masks from the government risks a public backlash.

In the early stages of the outbreak, the government advised the public to wear masks with high levels of filtration. It did not recommend using fabric masks.

When the number of people confirmed with the coronavirus spiked last month, people rushed to stores, and long lines were the result. Most left empty-handed.

Prime Minister Chung was criticized at one point for suggesting that there seemed to be no problem in mask distribution as everyone he passed by was wearing a mask. A pharmacist told the prime minister that most of the people were wearing the same mask for days.

As anger grew, the government advised the reusing of masks. Democratic Party leader Lee Hae-chan a week ago said he found no problem in wearing the same mask for three days, which didn’t sit well with the public.

During a senior secretary meeting on Monday, President Moon pleaded for patience as the new system for mask distribution was put into place. He said that some people might face inconvenience and acknowledged that two masks per person may not be enough.

President Moon Jae-in said that this mismatch in the market is inevitable as supply catches up with demand.

Moon said that masks not only have to be distributed fairly and evenly, but supply also has to be prioritized for medical professionals.

He asked the public for understanding and cooperation.

“The government will do our best in addressing the inconvenience,” Moon added.