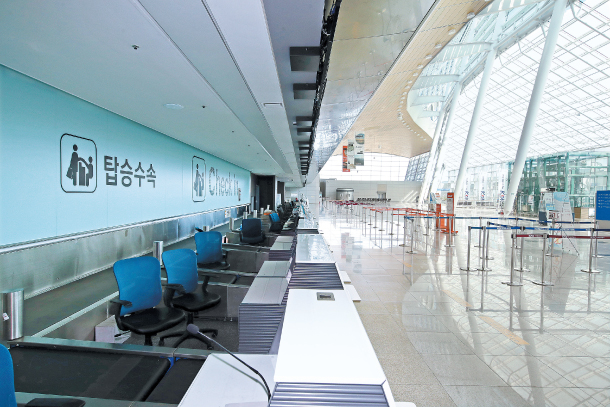 The check-in gates at Muan International Airport in South Jeolla are empty after the airport decided Friday to halt all flights until March 28. [YONHAP]

Companies are hurting with the coronavirus outbreak.

The industries affected varied by region.

In Seoul, the airlines, travel and education industries were hurt most. Eight local airlines reduced flights to China by 77 percent, which could result in losses of close to 3.7 billion won ($3 million) in operating profit from international flights for the first half of the year. Airline companies are likely to have problems with exports, as travel bans affect transportation of cargo.

Incheon and Gyeonggi, where 36 percent of the country’s manufacturing companies are located, are experiencing halts in production and exports. One construction material manufacturer said it’s having trouble providing supplies on time to clients in America and Europe after the coronavirus made it difficult to get materials from China.

One semiconductor equipment company in Gyeonggi said it has abandoned its performance goals for this year. The company has lost clients from China.

“The products and services we provide are all made-to-order, so we need to be in China for more than 300 days every year. Since this is now impossible, our operating profit for this year has dropped by more than 15 percent, and we expect the situation to stay grim,” said the head of the company. “There’s hardly any cash flow in the industry. It’s not only us. Close to 30 to 40 partner companies are also struggling,” he added.

Ulsan, home to Korea’s largest petrochemical complexes, has unique problems. Some companies were unable to do their mandatory air quality measurements due to tight disinfection measures and strict limits on the access of visitors to their facilities.

Jeju Island and Gangwon are likely to sustain losses from a slump in tourism, which the two regions depend on. Operating profits for hotels, tourist sites and golf courses have dropped by 50 percent. For restaurants, profits plummeted by more than 80 percent. One theme park in Gangwon canceled plans to hire new staff this year, after it saw 70 percent of its reservations for the month canceled and its operating profit shrank to a third of the previous year.

Daegu and North Gyeongsang, which have the most number of infected patients, have been pushed to the edge. Factories and businesses have stopped as the two regions experience a serious shortage of masks. The Daegu Chamber of Commerce and Industry said it received numerous requests from factories for masks for workers, so that factories can resume operations.

“We are simply running out of masks to give workers at our plants, which is causing a lot of fear among our staff. It’s getting harder to disinfect our facility and run it at the same time,” said an official from one car parts manufacturer in Daegu.

Many companies want the government to allow them to extend their working hours. They deserve it after the efforts they’ve made - allowing remote work and parental leave - to prevent the spread of the virus.

“We are planning to submit a comprehensive proposal to the government. This will include measures to turn around the economy, as well as how to tackle the Covid-19 crisis,” said Woo Tae-hee, vice president of the KCCI.