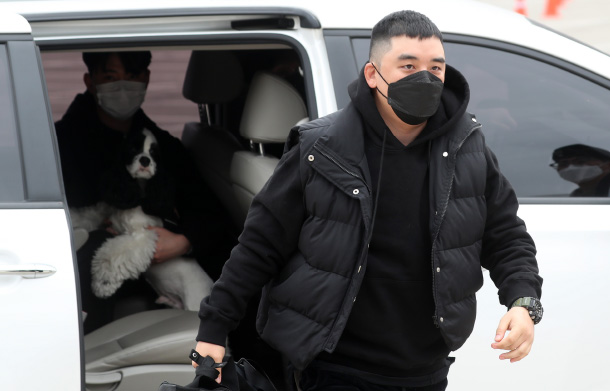 Lee Seung-hyun, also known as Seungri formerly of boy band Big Bang, enters a basic training camp to begin his 18-month military duty on Monday in Cheorwon, Gangwon. Lee was originally scheduled to begin his duty in March 2019 but postponed once when he was found to be linked to the so-called Burning Sun scandal involving many celebrities and entertainment insiders early last year. [YONHAP]

Reporters stood outside the camp’s gates waiting for Lee to appear hours before the scheduled entrance time of 3 p.m. Around 2 o’clock, Lee arrived and stood in front of the camp’s gates, took a bow for photographers and then retreated immediately without answering any questions from the local press. No fans were present. Other soldiers entered the camp via cars to prevent the spread of the coronavirus by minimizing human-to-human contact.

Lee will be assigned to his post after five weeks of basic training. Not long after that, he will be tried in a military court as an active soldier, as dictated by criminal law. As of this month, he has been indicted for the crime of habitual gambling alongside Yang Hyun-suk - the former head of Lee’s former agency YG Entertainment - for three and a half years beginning in 2013; illegal money exchange while gambling; soliciting sex for overseas investors from September 2015 to January 2016; embezzling money from his company Yuri Holdings for private purposes; and sending illegal photographs of women through messaging applications.

Lee’s enlistment notice was sent on Feb. 4 by the Military Manpower Administration (MMA) when the police investigation ended “because if the case continues over a long period of time, then it may disrupt [the person] from carrying out their military duties,” according to the MMA. Lee was originally set to begin his duty in March of last year, but it was postponed due to the investigations into the so-called Burning Sun scandal.

The controversy began with an assault case at the Burning Sun club in southern Seoul, owned by Lee, and eventually unraveled into one of the biggest drug and sex scandals in Korean entertainment industry history.

Since the story broke last year, the public has become increasingly angry with Lee for his lack of what people deem to be a sincere apology for his misdeeds and his overall behavior during the investigation. On the day his case was sent from the police to the prosecution last year, he reportedly visited a luxury spa in southern Seoul. And last month, a photograph leaked of Lee at a going away party ahead of training camp.

But a culture critic argues that Lee entering training camp should not be getting the attention that it is.

“People think that Seungri is at the center of the Burning Sun scandal, but that’s really not the case. We still haven’t figured out who really runs Burning Sun, how it’s managed, where the money went, how they got drugs, who used the drugs, who was raped, who raped them and who let the criminals off during investigations. Seungri should be investigated thoroughly, but the Burning Sun case itself should be at the center of the attention,” critic Ha Jae-geun said.

When the Burning Sun scandal swept through the entertainment industry, many other celebrities also faced scrutiny, for good reason.

Multiple celebrities were found to be sharing illegal videos through messaging apps during the so-called Burning Sun investigation. From left, Jung Joon-young, Choi Jong-hoon and a man surnamed Kwon were sentenced to prison time. Singer Roy Kim, who was also investigated, was let off with a warning. [YONHAP, NEWS1, MNET]

One of the most controversial figures was Jung Joon-young, a singer and close acquaintance of Lee who was revealed to have illegally shot and distributed sex videos of women without their consent. Beginning in 2015, Jung shot and shared videos of himself having sex with women and shared them in a KakaoTalk chat room he was in with Lee and other celebrities. Other celebrities in the chat room either quit their bands or retired from the entertainment field altogether, including Jung Jin-woon, model Lee Chul-woo, Kangin of Super Junior, Lee Jong-hyun of CNBlue and Yong Jun-hyung of Highlight.

Also among Jung’s friends was Choi Jong-hoon, a former member of boy band FT Island. As well as watching Jung’s videos, Choi was accused of raping a woman together with Jung and three others in January 2016, and on another occasion in March as well. They are accused of taking videos of both occasions and distributing them. Choi quit his band in March and was booked alongside Jung.

Jung, Choi and Kwon, along with two others, appealed the court’s decision, but the prosecution added a bribery charge against Choi, under suspicion that he bribed a police officer with 2 million won ($1,700) to let him off on a drunk driving case in 2016. Their first appeals court hearing took place on Feb. 4. A second hearing was scheduled for Feb. 27 but was postponed to March 19 after a witness did not attend.

Singers Roy Kim and Eddy Kim also found themselves being investigated for being associated with Jung’s chat rooms.

For singer Roy Kim, prosecutors decided to suspend his indictment on Feb. 25, meaning that they recognize his criminal charges but took into account other factors - such as age and criminal motive - and let him off with a warning. “No matter what his intentions were, he did not realize that it would qualify as illegal conduct. The singer is deeply remorseful for his misdeeds,” his agency Stone Music Entertainment explained in a statement.

“It won’t be likely for celebrities like Choi or Jung to make a comeback in Korea, because of their bad image,” said critic Ha. “But those who were only slightly related might make an attempt. Even in that case, they will have to bear the burden of a scarlet letter on their names.”