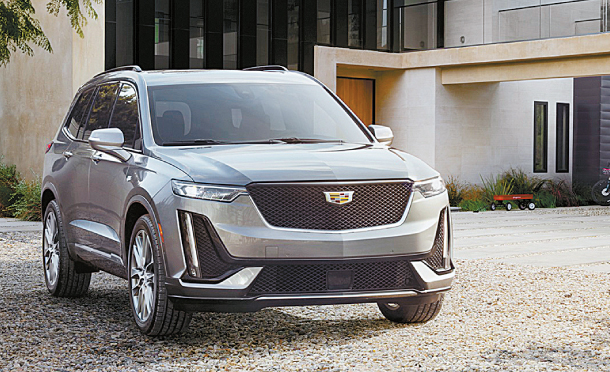 The Cadillac XT6 SUV officially launches in the Korean market next week. The seven-seater SUV is expected to compete against the GV80 and Mercedes-Benz GLE. [CADILLAC KOREA]

Cadillac has joined the large SUV segment in Korea, with Monday’s announcement that it will introduce the XT6 next week.

The U.S. automaker’s Korean unit said in a statement that it has begun receiving preorders for the SUV. The company added that it’s entering the large SUV segment to keep up with changing industry trends.

The XT6 is expected to mainly compete against the GV80 from Genesis and the Mercedes-Benz GLE. The Cadillac SUV, with three rows of seats, is positioned between the XT5 and the Escalade.

As local automakers struggle to fill orders due to production line disruptions in the wake of the coronavirus outbreak, Cadillac might be able to attract customers who are unwilling to wait more than a year to buy the popular GV80.

Keeping with its existing sales strategy, Cadillac is only selling the highest trim, named “Sport,” in Korea. With a 3.6-liter V6 gasoline engine and nine-level automatic transmission, the all-wheel-drive SUV is rated at 314 horsepower and 38 kilogram-meters (275 pound-feet) of torque.

Cadillac Korea said the XT6 was picked as one of the safest cars this year from the U.S. Insurance Institute for Highway Safety.

The XT6 officially starts sales March 16 through an online showcase, which is when the automaker will reveal more specifications, options and price information.

The Sport trim for the seven-seater SUV is priced at $54,695 in the United States, and some have expected that the price level could be similar in the Korean market.

The launch of the XT6 is an important first step for Cadillac Korea this year, following its vow to bounce back from a disappointing 2019.

Following the launch of the XT6, the local unit of General Motors’ luxury vehicle division is scheduled to release a face-lifted version of the XT5, new CT4 and upgraded CT5 in the first half of 2020. In the second half of the year, Cadillac Korea plans to add a new XT4 mid-sized SUV.