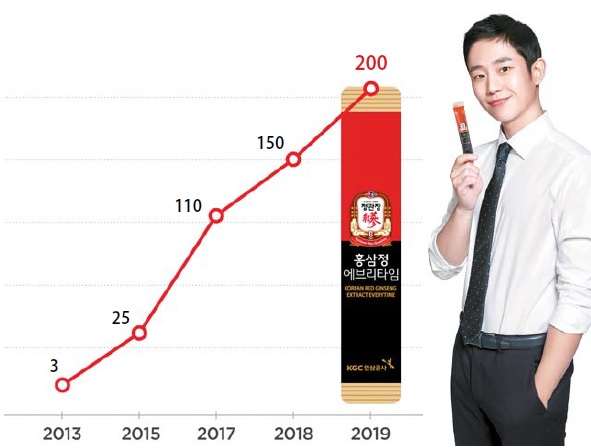 With concerns about the spread of the coronavirus growing, ginseng is seeing a boost in sales. Red ginseng, which is normally steam-dried, is widely believed to improve immunity levels and has been endorsed by the Korean government for its benefits.

It is known for its health benefits such as enhancing immunity, reducing fatigue and antioxidant effects and has been officially endorsed by the Ministry of Food and Drug Safety. 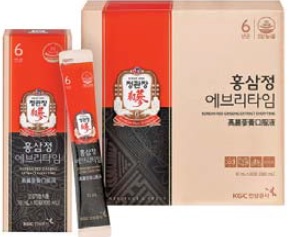 According to the Korea Ginseng Corporation (KGC), the total sales of CheongKwanJang’s Korean Red Ginseng Everytime, one of the best-selling products worldwide, has breached 200 million units.

Korean Red Ginseng Everytime’s main ingredient is six-year-old red ginseng concentrate, and its stick pouch design, a first of its kind, makes it easy to transport.

Korean Red Ginseng Everytime is also known for its popularity among many Korean celebrities and is branded as a premium health product in Korea. The product has been released in many countries around the globe and is enjoyed by many people from all walks of life.

The basic concept of Korean Red Ginseng Everytime grew from feedback from consumers who wanted to enjoy red ginseng in a more convenient way. To answer those calls, the KGC devised new innovative packaging to allow consumers to easily carry their ginseng around and consume it without any difficulties. This product was named “Everytime” to emphasize its convenience for everyday life.

Korean Red Ginseng Everytime is especially popular among those in their 20s and 30s.

In 2012, that age group accounted for just 5 percent of sales of CheongKwanJang, but that percentage has since shot up to 15 percent.

Along with the convenient design, the increasing demand for health foods and supplements in Korea has played a pivotal role in increasing the popularity of the product.

The success of Korean Red Ginseng Everytime has made the KGC a leader in the red ginseng industry and become a new paradigm in red ginseng products.

“Due to the recent outbreak of the coronavirus in Korea, many people are considering red ginseng as a way to increase their immunity, and the convenient feature of this product made it more enjoyable among Koreans,” said an official from the KGC.