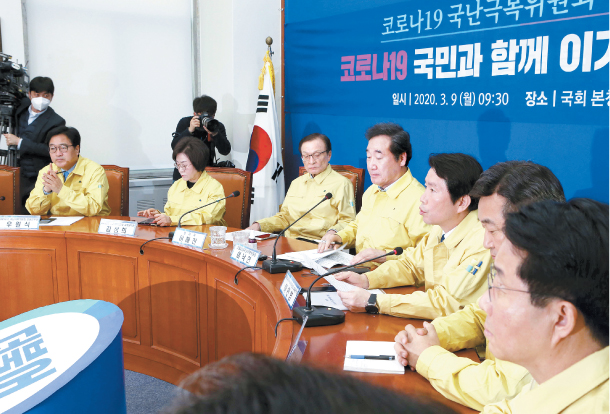 The ruling Democratic Party holds a leadership meeting in the National Assembly on Monday to discuss ways to overcome the coronavirus.[OH JONG-TAEK]

The ruling Democratic Party (DP) appears to be following the lead from its rival’s strategy of creating a satellite party to try and win more proportional seats, a plan it had initially fiercely condemned.

The leadership of the DP said Monday it will discuss the specifics of holding a vote by all party members to decide whether it will participate in a political party proposed by liberal civic groups.

While the main opposition United Future Party (UFP) has already launched the satellite Future Korea Party on Feb. 5 to win more proportional seats, the DP has been reluctant to use the same strategy.

The DP fiercely attacked the UFP for creating the satellite party in order to take advantage of the new election law it had railroaded last year despite the conservative opposition party’s objection.

The UFP criticized the DP for contradicting its previous stance and mulling a satellite party strategy. “Shame on you. The DP should rather make an honest confession that it actually regrets having railroaded the new election law,” UFP Chairman Hwang Kyo-ahn said Monday.

Hwang said the DP is showing the voters that it can abandon the election law for its own political gains. “This is proof that the new proportional representation system is insufficient to reflect public sentiment,” he said.

Over the past weeks, DP members, including Youn Kun-young, a former Blue House senior official and one of President Moon’s closest allies, have increasingly been suggesting that this may be the only recourse to defeat the UFP. After several liberal civic groups proposed a plan to create a political party devoted to proportional representatives, the idea, for the first time, was discussed at the DP’s election campaign committee on Friday.

During the meeting, DP Chairman Lee Hae-chan was formally briefed about the plan. Members of the campaign committee had a heated debate on whether the DP should participate in the new party or not and sources said many supported the plan.

Tentatively named the Political Reform Alliance, the new party will be formed by liberal civic groups and elder statesmen. They had a press conference on Feb. 28 and urged liberal parties including the DP and the Justice Party to join their move.

The idea is that the liberal political parties’ proportional candidates will join the Political Reform Alliance, win and then go back to their original parties to form an alliance of proportional representatives.

The Justice Party, however, rejected the idea. Chairwoman Sim Sang-jeung said the trick will make the centrist voters turn against them and disappointed voters won’t cast ballots at all.

The DP, however, has been mulling the idea. The Institute for Democracy, the party’s think tank headed by Moon’s key associate Yang Jeong-cheol, reportedly concluded that the DP must participate in the satellite party to increase the possibility of winning the general election.

According to the institute’s seven-page analysis, it accessed that the DP and the Justice Party will together win 22 proportional seats if they join the Political Reform Alliance. In this case, the Future Korea Party, the satellite party of the UFP, will win 18.

The institute urged the DP to join the civic groups’ initiative to stop the UFP from becoming the largest party and push forward an impeachment of President Moon Jae-in.

As the deadline is ticking, the DP continued the discussion on Sunday. According to the Public Official Election Act, the deadline to create a political party to field a candidate in the April 15 general elections is March 16. After a three-hour Supreme Council meeting on Sunday, the DP concluded that it will hold a vote for all party members to decide whether it will participate in the Political Reform Alliance or not.

“We made the decision taking into account the gravity of the matter,” said Rep. Kang Hoon-sik, chief spokesman of the DP. “Because the issue is so crucial, the Supreme Council members’ opinions remained divided.”

“The majority said it is unavoidable to participate in the proportional representative party,” a participant told the JoongAng Ilbo on the condition of anonymity. “Chairman Lee mostly listened, but he was leaning toward participation.”

The source said Reps. Lee In-young, the floor leader, and Cho Jeong-sik, chief policymaker, said the DP must join the initiative, while some others such as Rep. Sul Hoon opposed.

Former Prime Minister Lee Nak-yon, co-chairman of the election campaign, supported the idea. “Criticism is momentary, but the aftermath will last for four years,” Lee was quoted as saying by another participant.

The DP had a similar vote of all its members six years ago. In 2014, when the DP and Ahn Cheol-soo’s party were merging, the DP agreed that it wouldn’t field candidates for district office heads and district council members for the June local elections. But two months ahead of the election, the party held a vote of all its members and recanted the policy and field candidates.

Speculation, therefore, grew that the upcoming vote of the DP members is a preparation to legitimately reverse its decision.

The DP has 800,000 members who have paid membership fees. A mobile vote will likely take place this week, possibly Thursday or Friday.