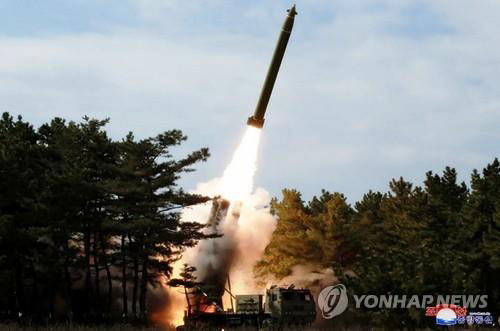 South Korean military officials said they were discussing the launches with their U.S. counterparts for further analysis, adding it appeared the regime carried out the test as part of an annual winter military drill.

The response was markedly dialed down from last week’s reaction, when the Blue House expressed “strong concern” about the North’s test and said it “urges” the North to “cease” such actions.

Kim Yo-jong, North Korean leader Kim Jong-un’s younger sister, slammed the Blue House for that reaction in a scathing statement on Tuesday evening, calling the South’s presidential office a “frightened dog” and an “imbecile” for criticizing its “action for self-defense.”

The regime said earlier last Tuesday via its Korean Central News Agency (KCNA) that North Korean leader Kim expressed “great satisfaction” with the “firepower strike drill” and the rapid reactions of the artillerymen responsible for the test.

Last week’s test was the first time North Korea conducted a weapons test this year, coming 95 days since its previous test on Nov. 28, when it fired two projectiles from its “super-large multiple launch rocket system (MLRS).”