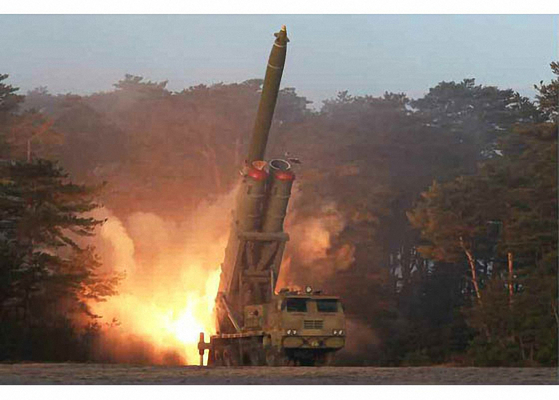 South Korean military officials said they were discussing the launches with their U.S. counterparts for further analysis, adding it appeared the regime carried out the test as part of an annual winter military drill, the same as last week’s test.

When asked about the launches in the afternoon, a Blue House official told local reporters on the condition of anonymity that the presidential office had been “paying attention” to the fact that the North carried out a test last week and was also wary of a statement released by Pyongyang’s Foreign Ministry last Saturday, implying they had anticipated another test.

On Saturday, North Korea’s Foreign Ministry denounced the United Nations Security Council for its condemnation of the regime’s weapons test last week and warned that such “reckless behavior” instigated by the United States could trigger “yet another momentous reaction” from Pyongyang.

The Blue House’s response on Monday was markedly dialed down from last week’s reaction, when it expressed “strong concern” about the North’s test and said it “urges” the North to “cease” such action.

Kim Yo-jong, North Korean leader Kim Jong-un’s younger sister, slammed the Blue House for that reaction in a scathing statement the next day.

Boiling tensions between the two countries cooled back down last Thursday when the Blue House announced Kim Jong-un sent a personal letter to South Korean President Moon Jae-in expressing his sympathies for the South Korean public in their battle against the coronavirus outbreak.

A South Korean government official who spoke on the condition of anonymity Monday said South Korean and U.S. intelligence authorities have obtained information indicating the coronavirus was spreading within the North and causing a “significant” numbers of fatalities, though the regime insists they have zero infections.