A childhood dream leads to the rewriting of history books

A childhood dream leads to the rewriting of history books

Lee Hye-jin first picked up cycling when she was a little girl, simply because she wanted her own bicycle. 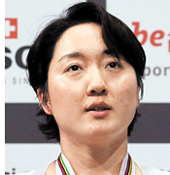 She not only fulfilled that wish, but went on to make Korean cycling history.

This year, Lee is hoping to again make her mark in the history books by becoming Korea’s first-ever cyclist to medal at the Olympics. Although cycling tends to be more popular in European countries and is dominated by athletes from that region, track cycling is becoming a more open playing field. Lee’s hope for an Olympic medal may not be an exaggeration as she is the top ranked individual in women’s elite keirin on the Union Cycliste Internationale (UCI).

Before Lee, former cyclist Cho Ho-sung’s bronze medal in men’s point race was the best finish at the World Championships.

Lee’s main event, keirin, is like cycling’s short track race, held at the velodrome. Rather than the time, the winner is determined by who crosses the finish line first, after a number of cyclists race on a 333 meter- (1,093 foot-) length track six times, or a 250 meter-length track eight times. The cyclists will slowly get their speed up as they ride the track following the motorized or non-motorized pacer. Once the pacer leaves the track, the competition starts. It strikes a similarity to short track as cyclists tend not to take the lead right away. They race at about speeds of 40 kilometers (25 miles) per hour, and toward the end they can reach speeds of up to about 70 kilometers per hour.

“Since I’m done with the championships, I feel comfortable,” Lee said. “Although it’s [my] best finish ever, since I’m a human, I have some regret that I wasn’t able to win. But it also motivated me to work harder.”

While it might be her most prestigious, the World Championships is not Lee’s first foray into record setting. Back in 2010, she won gold in the 500 meters and in sprint at the junior world championship. Although it was a junior event, Lee became the first Korean cyclist to win gold at an international competition.

In December last year, she won gold at the third and the fourth leg of the 2019-20 Tissot UCI Track Cycling World Cup in women’s elite keirin, again making history. She walked away with a silver medal at the world championships, but still, Lee managed to be the top ranked cyclist in women’s elite keirin for the 2019-20 season and earned her spot at the Tokyo Olympics this summer.

“I wasn’t thinking about [getting] all the way to first,” Lee said. “When I first won the World Cup, I was pretty stunned. The very first thought that went through my head was ‘Did I really do it?’”

Lee started cycling when she was in first grade in middle school.

“I wanted a bicycle when I was little,” Lee said. “But I couldn’t get it because it was dangerous. But if I joined the cycling team, even if I couldn’t take the bike home, they said they would give me my own bike.”

That decision marked the start of her cycling career which led her to earn a spot on the national team and eventually be ranked first in the world.

“I didn’t know that I would be riding a bike for this long,” Lee said. “I was going to go to college for physical education and planned on becoming a teacher.”

Throughout her career, Lee has competed in two Olympics. This year will be her third. When she competed for the first time in 2012 in London, she said it was “just for fun.” But her second appearance at the Olympics in 2016 in Rio was completely different.

Although she wasn’t the top ranked cyclist, her name was circulating in Korea as a likely athlete to medal. To meet up to such expectations, she trained overseas for four months. However, her hard work was not rewarded and she was eliminated in the semifinals, finishing eighth overall.

“I didn’t even want to look at the bicycle,” Lee said. “But thanks to great teammates around me, I was able to get through it.”

Since most cyclists only compete until their early-30s, Lee is considering this year’s Olympics her last chance.

“I don’t think there will be a ‘next,’” Lee said. “I think this is the last one. I’m more desperate than [I was at] Rio. Because of what happened four years ago, I started to think that I don’t get to achieve everything just because I want it.”

Soon, Lee will be heading to Europe to compete against the world’s top cyclists over the next four months as part of her preparation for the Olympics.

“Just because I’m the best cyclist in keirin, doesn’t mean that I can win all the time,” Lee said. “But I believe that if I prepare well, then I will see good results.”